a few things to know about our history

Dorchester is one of the oldest colonial counties in Maryland, with roots that date back to 1600s.

Capt. John Smith made the first recorded reference of Dorchester County in 1608. Named after Sir Edward Sackville, 4th Earl of Dorset, Dorchester was established as a county in 1669. English men and women who began to arrive in the mid 1630’s settled along the waterfront lands in the southern and western parts where there were numerous navigable waterways, an abundance of fish and crustaceans, vast forests, and good agricultural soils, all of which are still present today. The area was so bountiful in fish and game that early settlers reported that they had found another “Garden of Eden.” One of the earliest land grants in the county was called and still is known as the “Garden of Eden.” 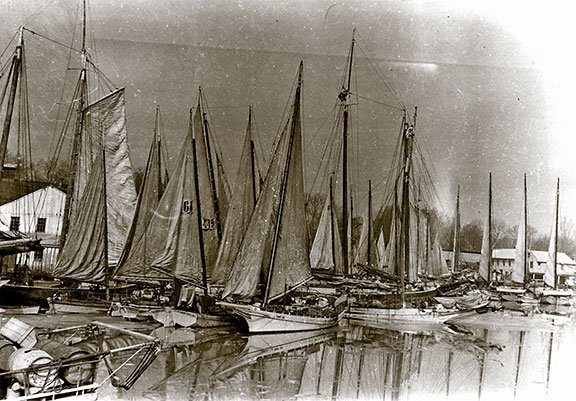 Boatbuilders have worked along the Cambridge Creek shore¬line for nearly 250 years. In the early 1900s, there were so many workboats it was said that you could cross the creek by stepping from boat to boat.

Greeting the settlers were Native Americans, who were peaceful in nature. Two major tribes of Native Americans, The Choptanks and the Nanticokes, members of the Algonquin Nation, lived in hogans along the shores, hunted, fished, crabbed and were persistent on learning agriculture. Soon driven away by the settlers, the Native Americans migrated northward, leaving their treasured home sites.

Several structures of the 17th, 18th, and 19th centuries are in existence in the County today to remind us of the early and later settlers. Historic churches, houses, schools, graveyards, and mills are scattered throughout Dorchester. Native American artifacts and relics from local tribes are exhibited in the local museums.

Dorchester County is the largest county in Maryland — when its water area is included; otherwise it’s the fourth largest. The shape of Dorchester actually resembles a heart and it is located at the mid-point of the Chesapeake therefore it is often referred to as “Heart of the Chesapeake.” It consists of 688 square miles with over 122,000 acres of wetlands—40 percent of the entire state’s wetlands. These wetlands are scenic and an integral part of the food chain for the Chesapeake Bay. The wetlands and adjoining upland areas contain both protected federal and state reserves for the nature enthusiast, as well as hunting areas for the sportsman. Deer, Canada geese, black ducks, mallards, and diving ducks are favorites among hunters.

Dorchester County offers a variety of living environments. Southern and western Dorchester communities such as Hooper’s Island and Taylor’s Island are waterfront areas of quaint fishing communities, crab picking houses, estates and hunting lodges. From the waters surrounding these areas are harvested the oysters, crabs and other seafood for delicacies such as steamed hard crabs, oyster stew and fritters, soft-shell crabs and crab cakes. In northern and eastern Dorchester are the towns of East New Market, Hurlock and Vienna. These are largely the agricultural areas where grains, market crops, truck crops, and chickens are raised. The entire town of East New Market is a designated National Historic District. Many structures in the town date to the 18th and 19th century. Vienna, another historic town in Dorchester County, is located on the Nanticoke River. Vienna was the custom’s district of the region and the original 1768 Customs House still stands. Hurlock is the agricultural center of the county.

In the middle of these two regions is Cambridge, the county seat and largest municipality in Dorchester. A booming seafood-packing town in the early 19th century, Cambridge sits on the majestic Choptank River. The most urbanized area in the county, Cambridge remains the industrial, retailing, governmental, and one of the social hubs of the county. 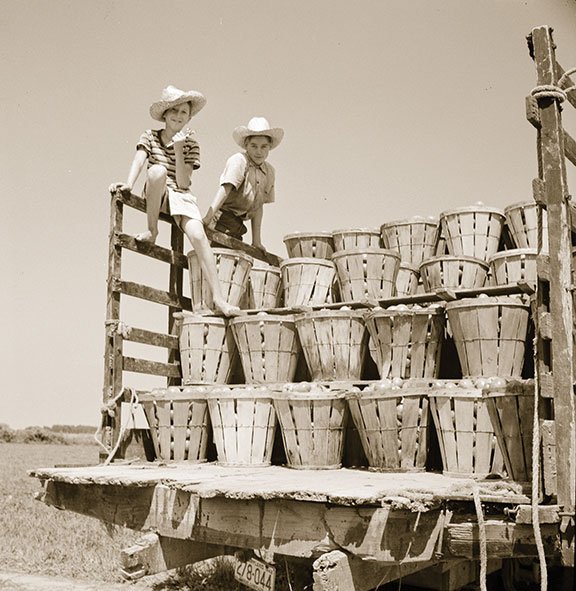 A young tomato picker on a Dorchester County farm waits for a truck loaded with bushels to leave for the cannery in this 1941 photo.

We also celebrate our harvests with events throughout the year, such as the Seafood Feast-I-Val, Crawfish and Muskrat Festival, Taste of Cambridge Crab Cook-Off and Festival, Strawberry, Peach, and Apple Festivals; and various oyster festivals. Check the calendar to see what’s coming up.