The Way of the Watermen

The Way of the Watermen

How Dorchester County’s heritage, culture and culinary delights are shaped by the men and women of the water

Story and photos by Abby Stewart

He sat on the edge of the dock with a smile, feet dangling over the Choptank River, as he watched his son teach his youngest grandson how to expertly dock their crab boat. It was the same way he had shown his boy more than 30 years ago in that very spot. Weathered by the sun, his hands were streaked with dried saltwater, and I was sure that it was also running through his veins. The watermen of Dorchester County don’t just harvest fresh seafood, they are the heartbeat of the people, their culture and way of life pulsing from one generation to the next, molding and shaping the county into a living, breathing testament to the preservation of the good things in life.

Frenzied crabs escaped from the wooden bushel basket that the young boy hoisted out of the boat and he chuckled. I watched in amazement as the boy moved with a quickness to capture the runaway crabs as if he had been handling them for decades himself. With dexterity and fearlessness, he snatched one up from behind its body, blue claws clasping and waving in the air. He lifted the lid to the basket and crammed the crab in with the others with an innate confidence that left me certain he had that same saltwater running through his little veins, too.

The Heart (and taste) of the Chesapeake Bay 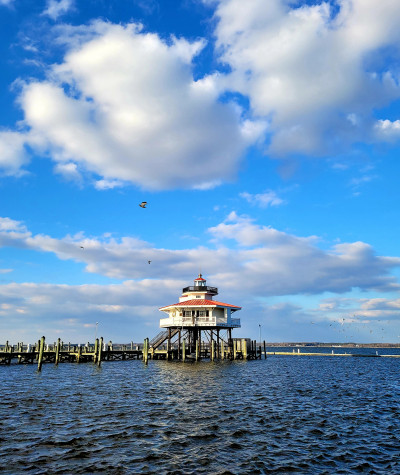 Dorchester County lies in the heart of the Chesapeake Bay, and with 1,700 miles of coastline, the culture of the waterman is at the very core of its history, evolution, and culinary roots.The people of Dorchester County cherish their watermen heritage, celebrate the men and women who have worked the waters for decades, and they praise the bounty that they bring in.

Wild-caught seafood is incomparable to the alternative, and it is plentiful in Dorchester County, thanks to these watermen. An innovator by the name of Captain John Morgan Clayton saw an opportunity in this abundance and opened the J.M. Clayton Company in 1890 in Dorchester County. Today, more than 130 years later, J.M. Clayton’s in Cambridge is the world’s oldest crab factory, where professional pickers have been preparing Chesapeake Bay blue crabs as fast as the local watermen could bring them in.

With oysters, fish, and crabs coming right off the boats year-round from the surrounding waters of the Chesapeake Bay and beyond to the Atlantic Ocean, fresh seafood is in abundance here, as is an appreciation for hard work and enjoying life to the fullest – creating a welcoming atmosphere that inspires you to do the same.

People in Dorchester County were raised eating seafood, grew up cooking it, and have perfected their grandma’s recipes with precision, and often with a personal twist on an age-old favorite, making dining in Dorchester County a memorable experience with every bite. An array of restaurants offer a variety of unique seafood recipes, but one thing remains the same throughout Dorchester County, and that is the availability of fresh, local crabs and oysters at just about any place you choose.

For nearly 40 years, waterman Bob Whaples has been working the waters of Dorchester County. “It’s not an easy way of life,” Bob said, as he seemed to pull memories straight from the evening air, “but it’s worth it.” He recalled decades of 2 a.m. start times with days that don’t end until dinner is getting cold on the table. Hot summer sun, blistering heat, and freezing winds in the dead of winter would turn many people away, but not people like Bob Whaples. Watermen don’t get days off for inclement weather, they don’t get sick days or PTO, the money is hard-earned and if they aren’t in the water they aren’t making it.

“Some days beat you down and by the end of the day you’re fed up, but before sunrise the next morning, you can’t wait to go,” Bob said, shaking his head and smiling.

Bob got his first boat of his own at the age of 12 after falling in love with the water while crabbing with his grandfather.

“It’s something that once you get it in your blood, it’s hard to get it out,” Bob said. His son has been crabbing on his own since he was nine years old. “He’s done real well for himself, and has four kids of his own now.” So just like that, your son is teaching your grandchildren the ways of the water just like your grandfather taught you nearly 50 years before.

“I was in the service and traveled all around the world, but I landed right back here because I guess this is where I was supposed to be,” Bob said. “It just feels right.”

Kool Ice: Fresh off the Boat

Pickup trucks backed up to the doors of Kool Ice and Seafood in Cambridge, unloading their catches of the day as we walked up. Salty fishermen heaved bushel baskets and coolers over their dropped tailgates full of Maryland blue crabs and an assortment of fish. A Dorchester County mainstay and staple for locals and visitors alike, Kool Ice is a seafood retail market that has been buying seafood from local fishermen and selling it to customers at the same location daily since May of 1972.

“I started off as a waterman myself,” said Dave Nickerson, owner of Kool’s. “I was buying crabs, fish and oysters from my buddies and somehow I got into the seafood business,” he said. “It wasn’t really planned, it just happened.”

Just as the seafood arrives throughout the day, in the evenings it gets loaded up in other trucks and sent out in all directions to both domestic and international markets.

“If you took seafood out of Dorchester County, you wouldn’t have nothing left but farmers, Dave said, half jokingly. “That’s pretty much what makes us up, farmers and watermen.”

Just like Bob Whaples, Dave’s family is also in the business. His nephew Martin has been with him for more than 40 years helping him run the business. “We’ve done a real busy retail,” Dave reminisced. Kool Ice depends on about 100 boats, some of which have been backing their trucks up to deliver seafood to Kools since the very first day. “I’ve been blessed,” Dave said. 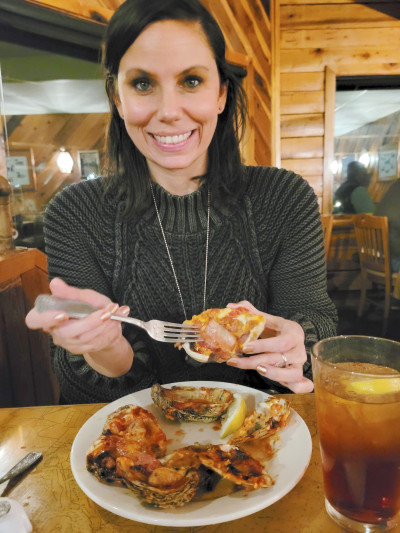 Have you ever tried BBQ sauce and bacon on a steamed oyster? I hadn’t either until I sat down to eat at Suicide Bridge Restaurant in Hurlock, Maryland. The plate of hot, plump oysters on the halfshell came to the table smothered in a homemade coffee BBQ sauce, cheddar cheese and light pieces of crispy bacon. I was skeptical at first at the unusual concoction, but I can attest it is now reason enough alone to make the drive to Dorchester County. The saltiness of the oysters was not lost in the sauce, but enhanced by the flavor of the light sauce and the texture and smokiness of the bacon strips. To amplify my elation, shimmering platters of steaming little neck and top neck clams, along with more fresh steamed oysters were lowered before us. The expansive dining room was filled with chatter and the sounds of enjoyment, and I could see the people at the tables on the dock outside were enjoying their seafood as much as we were.

Suicide Bridge Restaurant opened in 1980 by Dave Nickerson of Kools, and only sat about 20 people with a menu that consisted exclusively of crab balls and cheeseburgers. Today, it is one of the most popular and beloved restaurants in Dorchester County and beyond. Run by Dave’s other nephew, Craig, the restaurant serves a lot of the seafood that comes off of the local fishing boats and into Kool’s market, demonstrating the full circle the watermen play in harnessing and sharing the assets of Dorchester County with locals and visitors.

As Suicide Bridge is also well-known for their homemade desserts, we chose to split an eclair stuffed with vanilla custard and topped in Heath Bar crumbles to finish off the meal. The only thing short of amazing about this delight was that we didn’t get one for each of us. 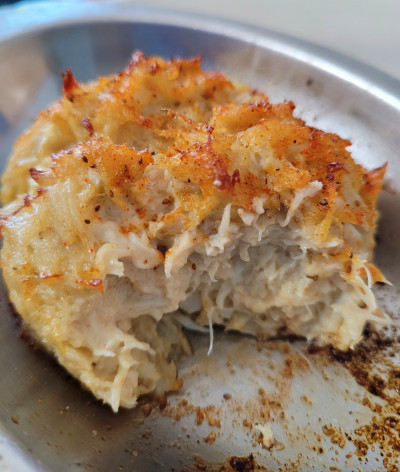 It wasn’t on the dock of a waterfront restaurant but in an old historic schoolhouse on Hoopers Island that I had the best crab cake of my life. Former students of the school, families and vacationers who had heard, like I had, about the incredible food at Old Salty’s Restaurant in Fishing Creek, filled the wooden booths and tables of the restaurant in a friendly, welcoming environment that contributed to the “downhome” feel.
Before windows overlooking the marshy waters that back up to Blackwater National Wildlife Refuge, our cheerful server delivered our crabcakes. Without hesitation I stabbed one with my fork, and the light, plump crabmeat, broke open into sweet, steamy bites. Pure crab and no filler, it was a mystery how it stayed together so delicately.

While we waited on another house specialty, an oyster imperial, Old Salty’s Owner, Jay Newcomb, showed us around the schoolhouse. The wooden floors creaked beneath our footsteps in a familiar way that transported me back to grade school. Old photos told stories along the walls, all the way back through the bar to the gymnasium.

The meaty local oysters were waiting at the table for us when we returned, a half dozen on the halfshell piled high with impressively large and savory chunks of backfin crab meat imperial, smothered in cheese. It was devilishly good, and an unforgettable way to close out our Dorchester County seafood tour.

The Best Things in Life

We all long for simple days, where loved ones are gathered and time slows down enough for us to truly appreciate and revel in the little things that often get lost in the chaos of the day-to-day. As Bob Whaples put it perfectly: “When you go down to your boat and it’s blowing 30 miles an hour and you know you’re going to take a beating all day, but then you see the sun coming up over the trees and you know you’re making a good living and everything is going to be alright.”

The hard-working ways of the watermen of Dorchester County are an honorable model to live by: work hard, don’t give up, and take joy in the precious little things, like a warm sunrise or a fresh plate of blue crabs, all of which you can enjoy to the fullest in Dorchester County, Maryland: the heart of the Chesapeake Bay.