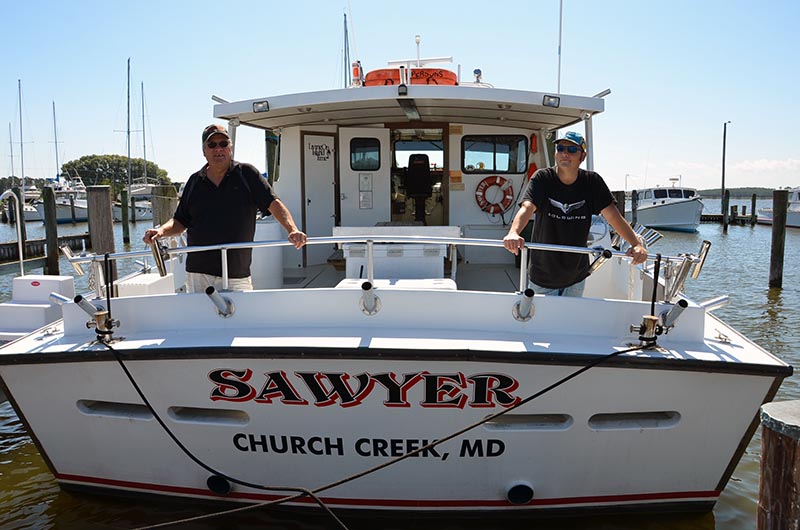 We continue our monthly Heritage Business Spotlight with Sawyer Chesapeake Bay Fishing Charters & Chesapeake Bay Tours! Each month, we recognize a business like Sawyer’s that has deep ties to the Heart of the Chesapeake Country Heritage Area.

Captain Dave Schauber has fished and crabbed on the Chesapeake Bay and its tributaries ever since he was a child and his own children have done the same. That deep-rooted affinity for the landscape, waterscape and heritage of Dorchester County has driven his business, Sawyer Fishing Charters, for the past 27 years.

From recreation to business

A native of Chestertown, Dave moved to Dorchester County in 1981 to work at the former Spicer Sawmill in Church Creek, following a career path that had started in Caroline County where he both worked in a saw mill and ran his own mill. At the invitation of a co-worker at Spicer’s, he began joining him on fishing excursions in the rivers and bay around Dorchester County.

What started as a bit of free-time recreation soon evolved into something bigger. He got his captain’s license in 1991 and decided to start offering fishing charters on the weekends and other days off from work. His business grew, as did his boats. He moved from a 25-foot C-Hawk to a 42-foot bay-built boat and finally to a 52-foot boat – a far cry from the 12-footer he enjoyed as a teen on the Chester River.

“In 2002, my current boat was built in Crisfield,” Dave said. “It’s one of the biggest boats in the Chesapeake Bay charter fleet and has allowed us to diversify our operations into packaged tours, lighthouse cruises, and trips to various destinations along the Chesapeake Bay, as well as fishing charters.

Soon, Dave’s side business was booming and rapidly developed into a full-time endeavor. In fact, the name – Sawyer’s Fishing Charters – evolved from the 30-plus years he worked in sawmills, when he was known simply as “The Sawyer.” The name stuck.

“Once we built the boat, the business really took off,” Dave said. “In 2004, we were doing 200 trips a year. The fishing was really, really good. Around that time, we also began offering tours, mostly oriented toward larger groups and bus trips.”

More than 90 percent of their business comes from outside Dorchester County. They draw visitors from the Eastern Shore, as well as the rest of Maryland and the neighboring states of Delaware, Pennsylvania and Virginia.

“We bring people to Dorchester County who might otherwise never come,” Dave said. “Running the tours and teaching people about our area is a big thing for me. You’d be surprised at the number of people over 70 who have never been on a boat. The fishing’s great, but it’s the tours that have been important for us.”

“Water literally moves our business. Our whole business operates on the water. My favorite thing about Dorchester County is that it’s a nice, peaceful area. There are a lot of good people here.” – Captain Dave Schauber

His son, Dave Schauber, Jr., joined his father in the family business about 11 years ago and is a passionate tour guide, especially for excursions such as the Harriet Tubman by Land and Sea Tour. He will meet a group at the Dorchester County Visitor Center, join them on the bus and then narrate a tour that travels to key landmarks, such as the Stanley Institute, Parsons Creek, Stewart’s Canal, the New Revived Church, Brodess Farm, the Bucktown Store and the Harriet Tubman Underground Railroad Visitor Center.

The trip also includes a narrated cruise along waterways where Harriet Tubman worked, where the Schaubers share insights about Dorchester County’s history and the traditional way of life on the Eastern Shore, focusing on crabbing, fishing and the watermen.  They point out the wildlife and discuss the environmental changes that have affected many islands and shorelines.

“I think the Harriet Tubman tour is very important,” his son said. “That means a lot to me because she means so much to the people who come down here to do the tours. It’s our American history. I see an emotional connection.”

They also have partnered with the Department of Agriculture and seafood buyers to run educational excursions for chefs from the Baltimore and Washington area.

“We bring them across the bay so they can see how the products that they are using are harvested,” Dave said. “They see how crabs are steamed, picked and packaged. The see how oysters are grown. They see where the products are coming from.

“We are proud to be promoting Maryland and our local heritage.” 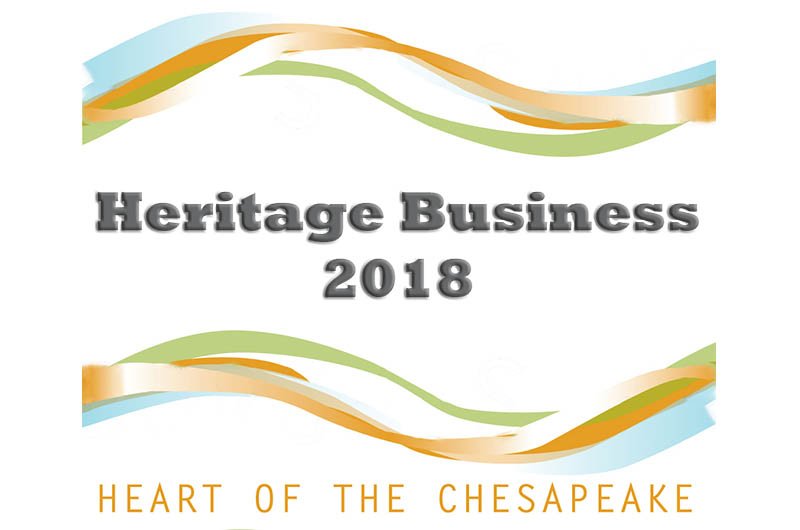 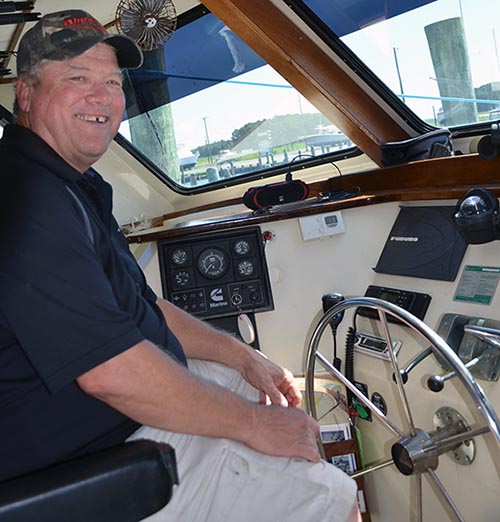 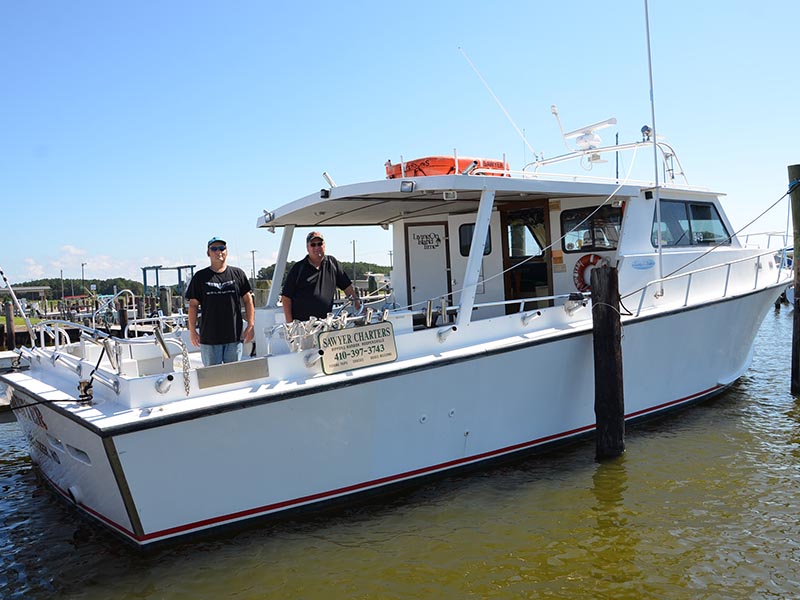 Win a Gift Certificate from Sawyer Charters!
*As part of Heritage Business Spotlight, Sawyer Charters will award a $25 gift certificate to one person chosen randomly from those who post a bit of trivia or a positive experience they have had with Sawyer’s. Just share your comment on our Facebook post by October 24 to be entered in the drawing. Click here to comment and enter.

*CONGRATULATIONS to Adriane Powers Guernsey who won the gift certificate from Sawyer Fishing Charters & Tours! She commented: “Our family came to visit us here on the Eastern Shore. After many phone calls to several fishing charter companies we were blown away by the response from Sawyer Charters. They were quick to respond, were willing to accommodate our older and younger fishers in the group. The were so much fun to talk with and hang out with for the day. And Bonus, we caught his first catfish onboard the Sawyer! The Maryland Eastern Shore is down to earth and these guys are the exact definition of that.” 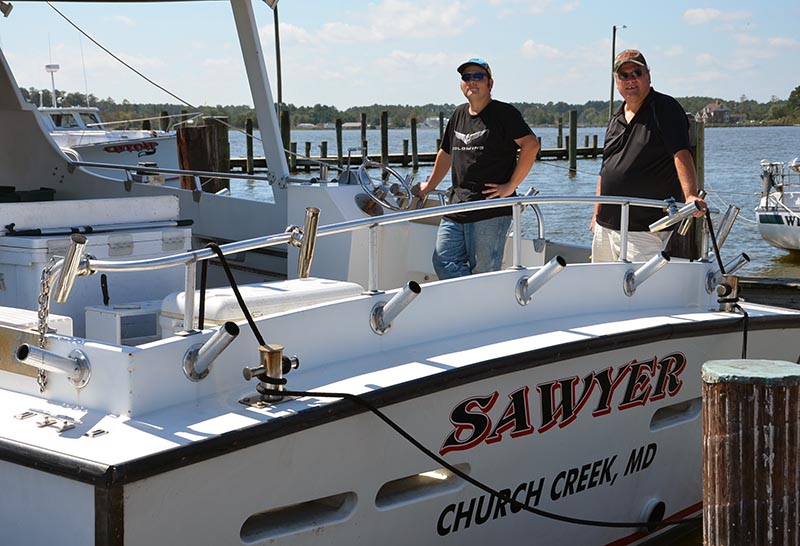