A Couple’s Weekend in Dorchester County

I’ve always wanted to see a bald eagle up close, but I never imagined it would happen like it did. It was a warm, breezy day, and Jason and I were kayaking through Blackwater National Wildlife Refuge in Dorchester County, Maryland. We had just finished paddling down one of their 8-mile water trails, so we pulled up on a secluded shoreline to rest on the bank. Once I landed on the marshy beach, I lay back on my kayak, lifted my face to the sun and I closed my eyes. 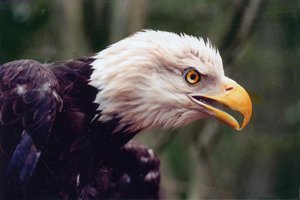 There was a sudden break in the sunlight as a dark shadow passed over me. Startled, I opened my eyes just in time to see the underbelly of a bald eagle soaring just above us. I never realized how massive their wingspans are; its feathers seemed to fill the entire sky from one horizon to the other. The eagle’s altitude was high enough that I wasn’t frightened, but it flew close enough for me to make out its sharp yellow beak, and the sleek and fluffy brown and white plumage that detailed its large body. Before I could get a word out, a second eagle swooped in, this one coming closer to us. I held my breath and it looked me right in the eyes before passing us by to perch on a nearby loblolly pine tree. Our adrenaline erupted into laughter as we lay there motionless on our kayaks, shocked and thrilled at our close encounter.

That was the first but not the last surprise that came from our weekend in Dorchester County. When Jason and I grew weary of our monotonous work weeks and busy schedules, we searched online for a nearby coastal getaway to escape to. We didn’t want a run-of-the-mill touristy beach vacation, we wanted to immerse ourselves in a deep, authentic experience, full of good food, welcoming people and rich history. When we decided on Dorchester County on the Eastern Shore of Maryland, we could have never imagined how much our long weekend here would enrich and change our lives.

Jason and I were both born and raised in the hustle and bustle of a metropolis, and while we love the culture and opportunities the city offers, we had grown restless and the things that used to delight us seemed to have lost their luster. As we crossed the bridge over the Choptank River and drove into Cambridge, however, an easiness began to smooth our brows, loosen our shoulders, and illuminate smiles. 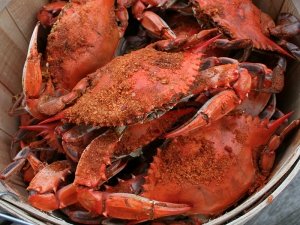 It quickly became a weekend of firsts. Not only did I never think I would get close enough to a bald eagle that I could see him blink, I also never envisioned myself as a girl who could eat a dozen jumbo crabs in one sitting, but there I found myself one afternoon, bellied up to a picnic table behind our Airbnb, elbows-deep in picking the sweetest Chesapeake Bay blue crab meat I had ever had. And I don’t know if I’ve ever been happier. We scored the world-famous blue crabs of the Chesapeake Bay from the world’s oldest crab company, the J. M. Clayton Company in Cambridge. Famous for the fresh seafood that local fishermen bring right up to their door, J.M. Clayton’s has been supplying seafood and crabs to customers, wholesalers and restaurants all over the country for more than a century. With Old Bay and a smile on my face, I realized they don’t call these crabs world-famous for nothing, so I planned to pack my cooler on the way out of town and swing by for more of these blue beauties to take them back to the city to share with my family.

Have you ever stumbled upon something by accident that ended up being a great adventure? I feel like that’s how most of the best adventures begin, and it happened to us on our first day in Dorchester County. When we were at J.M. Clayton’s picking up our seafood, we walked around the back of the building to look out over the water and we stumbled upon an incredible mural. A larger-than-life great blue heron exploded out of the back of the building and was devouring crabs from the water beneath its feet. This gigantic mural overlooked the sparkling water that was topped with workboats of crabbers and pleasure boats, and the artistic tribute to these great waterbirds sparked our interest. We later found out that it was actually one of several murals along the Chesapeake Country Mural Trail. As both of us are both art and adventure seekers, our hunt to find the rest of the murals was on and the trail became a scavenger hunt that revealed its many rewards to us along the way.

Using online breadcrumbs, we set out in search of a mural called “Goose on a Caboose.” Making our way around Cambridge, we finally spotted it: an old, unused caboose that looks as if giant Canada geese are breaking out of the train car, flying from a marshy scene. Waterfowl are important characters in what makes Dorchester County the quaint waterfront haven that it is. We stopped for a fun photo between the wings of a goose on the caboose, and then read up on Michael Rosato, the mastermind and the paintbrush behind this brilliant, storytelling, linkable exhibit. 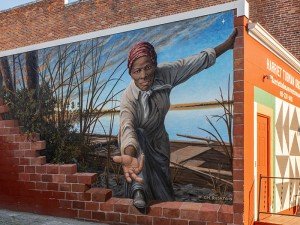 One of my favorite murals we found along this adventure was that of Harriet Tubman, who was born into slavery in Dorchester County. Tubman, a famous American hero, abolitionist and humanitarian, escaped slavery in 1849 and then passed the freedom forward by traveling back to where she escaped from more than a dozen times to lead more than 70 family members and friends out of slavery using the secret network known as the Underground Railroad. When we walked up to the mural on the side of the Harriet Tubman Museum in downtown Cambridge, tears welled up in my eyes and goosebumps covered my skin as Harriet reached right out of the mural in “Take My Hand.” Standing there, overwhelmed by a sense of reverence, Harriet’s strong and powerful spirit surrounded us. The museum is a part of the Harriet Tubman Underground Railroad Byway, a scenic drive, traversing Maryland’s Eastern Shore, that includes 36 sites connected to Tubman and the Underground Railroad. After the Wildlife Drive and the Chesapeake Country Mural Trail, Jason and I are excited to come back to Dorchester County to experience another kind of driving adventure. We have already planned our route for our next visit, kicking off at the Harriet Tubman Underground Railroad Visitor Center, to take the historical drive back in time.

Morning coffee overlooking the water, backyard sunsets from the hammock together, and nights by the fire pit were the memories we made at our comfortable and quiet Airbnb in Dorchester County, where we not only had the chance to experience an authentic look into the life of a Dorchester local, but we found the time and place to reconnect. Our peaceful home for the weekend on the water delivered a comforting sense of welcome mixed with an excitement of new opportunities, experiences and lessons. As nature was the backdrop and the choir for every experience we had in Dorchester, we believe that is what drove us to really connect to something greater, to a sense of peace, to a method of slowing down, and to a mantra to remember to live intentionally. We never want to forget how this place transformed us, how it brought us back to what is really important, back to each other, and best of all, back to ourselves. 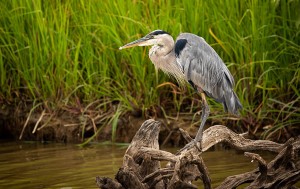 On the last day of our trip we went back to Blackwater National Wildlife Refuge where it all began, and we set out on the scenic 4-mile Wildlife Drive. I took out the U.S. Fish and Wildlife Service’s Bird Checklist that we picked up at the Visitor’s Center in Cambridge for another fun scavenger hunt as we drove. We passed eagle nests, wide-open water views, and the convergence of tidal marshlands and forests; we rolled our windows down, turned the radio off and listened to the marsh grasses whipping in the wind. There was nothing but nature for miles and miles. The “kraaaaak” of great blue herons serenaded our cruise, and every now and then we could make out the chirping of salt marsh sparrows. We drove past sky-high loblolly pines where the bald eagles make their nests. Red-winged blackbird songs led us along as we snaked around the refuge, passing over the beautiful Blackwater River, which glistened bluer than the clear sky above. It was one of those perfect days, you know the kind, when your soul feels like it has taken a deep breath, and all of your worries have lost their voices; their loud, beckoning calls hushed by the whistle of salt meadow cordgrass rustling in the breeze.

There are moments that as they are happening, you know you will remember them for the rest of your life. The last night of our visit in Dorchester graced us with one of those moments. We sat on the long dock behind what now feels like our home away from home. A cool breeze snuck into the warmth of the day as the sun set into the water of the Chesapeake Bay. The sun was bright orange amidst the periwinkle sky, then it swiftly dipped below the horizon, sinking like a giant egg yolk dropping into a glistening pool of quicksilver. As it disappeared, the sky filled with fiery hues of pink and purple, cooled off along the fringes by electric, brilliant blues. I closed my eyes and Jason squeezed my hand as he closed his eyes, too. At that moment I smiled as I realized that just a few days ago, when we arrived here in Dorchester County, we had no idea what we really needed, but somehow that’s exactly what we found.