The monthly Heritage Partner Spotlight focuses on our Heart of Chesapeake Country Heritage Area (HCCHA) partners and how they have supported heritage in Dorchester County with a project funded by either a Maryland Heritage Areas Authority (MHAA) grant or a HCCHA mini-grant.

This month’s spotlight shines on WHCP Community Radio for encouraging a spirit of active community participation; preserving and presenting the cultural past, as well as showcasing the work of contemporary artists; documenting, recording and preserving the oral histories of members of the community; and remaining committed to radio programming with a human perspective.

Making Dorchester ‘A Great Place to Be’

In the six years since its founding, WHCP Community Radio has become a dynamic community presence, inspiring Dorchester County residents and visitors far and wide. The station’s team of volunteers provide a broad base of educational, cultural and informational programming that challenges, broadens and enriches listeners. Their efforts foster a sense of community throughout the region while sharing programming and services with a larger public via internet distribution.

True to its mission, WHCP celebrates the human experience as infinitely varied; encourages a spirit of active community participation; preserves and presents the cultural past; showcases the work of contemporary artists; documents, records and seeks to preserve the oral histories of members of the community; and remains committed to radio programming with a human perspective, respecting all peoples and their environments.

“WHCP is an exemplary heritage partner in the broadest of terms,” said Julie Gilberto-Brady, manager of the Heart of Chesapeake Country Heritage Area. “The station supports all our heritage partners by promoting and sponsoring their events and collaborates on projects with them. When we planned the Smithsonian Water/Ways exhibit in 2019, WHCP helped publicized the exhibit and even organized their own related event at the station.

“When the Heritage Area planned Dorchester County’s 350th Anniversary Celebration, WHCP was on site to record the entire celebration. And as we have worked on developing our cell phone audio guide, WHCP staff generously recorded and edited some of the tracks for us, including our most recent addition in Hurlock. Their passion and can-do spirit really do contribute to making this place – as their tagline goes – ‘a great place to be.’” 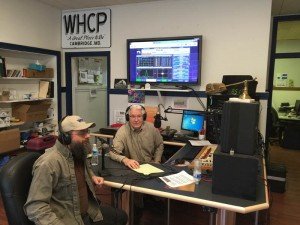 This determined and dedicated band of volunteers traces its roots to 2013 and the resolve of Mike Starling, then a relatively new resident of Cambridge, who had spent a full career working in commercial and public radio broadcasting. Starling knew of an upcoming opening of a filing window under the Local Community Radio Act, where Low Power FM frequencies were being authorized to operate by established non-profits.

Starling approached Jay Corvan and Farrell McCoy of Historic Cambridge about having them file for the license, which they readily agreed could be a positive contribution to the community. Starling, who was both a broadcast engineer and attorney, prepared the license application, The FCC granted the application in early 2014. Thanks to scores of contributions from contacts around the country, WHCP was able to outfit two studios at 512 Poplar Street on July 4, 2015. The station now has more than 200 dues-paying members. 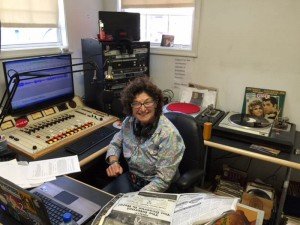 WHCP has steadily expanded community engagement through the four dozen community volunteers who share their time, energies and passions on the radio. A signature program for the station is MidShore MidDay. The daily public affairs program runs six days a week at noon showcasing the activities of nonprofits and newsmakers throughout the MidShore. This popular program is made possible by the tight knit team of Executive Producer Diane Marquette, along with Cathy Beise, Doug Schuetz, Jim Brady, Susan Morgan, Adam Canfield, Susan Klise, Dr. Tom Flowers (posthumously), Chuck Prahl and the MidShore Fishing Club, as well as Starling and dozens of community leaders who regularly contribute to the show.

In short order, WHCP’s services expanded to add live streaming at whcp.org, enabling listening around the globe. Listeners in dozens of countries and states tune in to the station every month. 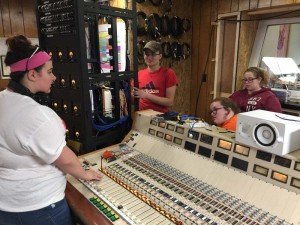 The station began offering an internship program for Cambridge South Dorchester and North Dorchester High School students, as well as students at Chesapeake College and other institutions of higher learning. Thanks to a grant from the Department of Housing and Community Development, a group of seven students were hired for two months in 2018 to complete the station’s Electronic Technology Assembly Program, whereby they learned soldering, ethernet and broadcast wiring standards.

They used those skills to assemble the performance studio complex at the “new WHCP” at 516 Race Street, as well as assemble hundreds of Firefly Radios and boxes of ethernet and microphone cables for the station. The WHCP Internship program, where students earn a modest weekly stipend while learning multimedia skills, continues thanks to support from the MidShore Community Foundation and George B. Todd Fund. 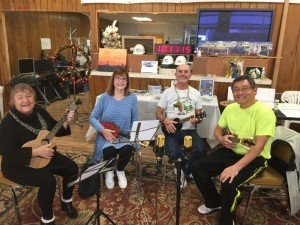 WHCP records and hosts concerts at its studio throughout the year, featuring groups like these local ukulele musicians.

The station has supported, thanks to the leadership of George Vojtech, Donna Flaggs and Patty Kaczmarek, nearly two dozen intimate music concerts featuring nationally-known musicians in the front room (aka Groove City Studio) at WHCP and at Venue 447. Once the State of Emergency is lifted, the Groove City crew will be expanding and moving their concert series to the Dorchester Center for the Arts.

“Annually, the station presents a Spring Gala in March and a Fall Membership Drive in October featuring notable local, regional and nationally known musicians,” Starling said. “These are great events where we celebrate being a part of the great Cambridge Community.”

“A project that has become a ‘capstone’ contribution is a one-hour documentary, You Don’t Know Nothin’ About Groove City. This project would not have happened without the support of the Heritage Areas Mini-Grant, along with contributions from the Dorchester Center for the Arts, and support from numerous individual donors and organizations. The film documents history about our town that many did not know.

“The MHAA has also been instrumental in providing initial support for the launch of the now highly popular WHCP Community Radio Calendar, populated with amazing photography submitted by area photographers, and containing tons of information about major events each year, as well as noting DCPS days off and Hunting Season Open dates year-round.

“The funds provided by MHAA and HCCHA mini-grants has made all of the difference in being able to execute on what for us were big ideas with scant initial resources and funding. The annual WHCP Cambridge Community Calendar has grown and is fully self-sufficient thanks to sponsors in the community. The You Don’t Know Nothin’ About Groove City video was stymied at what was a much shorter, inadequate length due to funding constraints – it looked like it simply could not be finished. But thanks to the support of the HCCHA, more than 40 hours of video and interviews were shot and more than 1,500 hours went into the writing, directing, editing, narration and assembly, with Cesar Gonzalez and Didier Brival making it all happen.”
– Mike Starling

WHCP’s annual fundraiser, with Lez Zeppelin, had to be postponed because of Covid-19. However, the silent auction, which would have been included at the event, has moved online! Bid on an item by April 15 and support the station.