The monthly Heritage Partner Spotlight focuses on our Heart of Chesapeake Country Heritage Area (HCCHA) partners and how they have supported heritage in Dorchester County with a project funded by either a Maryland Heritage Areas Authority (MHAA) grant or a HCCHA mini-grant.

This month’s spotlight shines on the town of Vienna, a historic crossroads village on the Nanticoke River, dating from early colonial times. Steeped in tradition and history, Vienna has managed to preserve much of its charm and quiet lifestyle for more three centuries while finding ways to share and celebrate its rich heritage.

Located southeast of Cambridge in the center of the Nanticoke River Watershed, Vienna was first explored by Captain John Smith in 1608 and is one of the oldest colonial settlements in the state. This quaint community of approximately 300 residents is home to a 1768 Customs House, the Vienna Heritage Museum, the Nanticoke Discovery Center and a waterfront park, along with many other historic properties.

The river was named for the powerful Nanticoke Indian Confederacy that dwelled along its shores and navigated its waters from the Chesapeake Bay to the inland reaches of Delaware. The first recorded European contact came when Captain John Smith encountered the Nanticokes near present day Vienna on his historic voyage of exploration around the bay and up the Nanticoke in 1608. 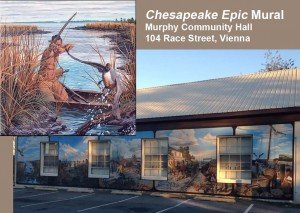 Long before the first European explorers arrived, the Nanticoke Indians inhabited the areas in and around Vienna and the Nanticoke River Watershed. The emperor’s village of Kuskarawaok was located near Vienna. These early inhabitants indicated that the area now occupied by the town was called Emperor’s Landing.

Present day descendants of the Nanticokes believe that Emperor’s Landing was used as a ceremonial feasting ground in the past. In recent years, the town, with help from the Maryland Department of Natural Resources and Dorchester County, has entered into a long range program to upgrade the waterfront park, and has chosen to name it Emperor’s Landing in honor of these original inhabitants.

This rich history is celebrated in the annual Native American Festival, organized by the Nause-Waiwash Band of Indians. Held in the town’s ballpark, the event serves to educate native and non-native Americans on the unique historical and modern Native American culture of Dorchester. The history of the little town of Vienna and the historic Nanticoke River also are incorporated into the event.

The tract of land that is now Vienna was a portion of ten thousand acres along the north shore of the Nanticoke River granted by Charles Calvert to Lord Baltimore. The entire tract was patented in 1664 as Nanticoke Manor. Vienna was formally founded in 1706 as decreed by the Colonial Assembly.

In 1671, a ferry service for crossing the Nanticoke River was established. That service continued until 1828 when the first bridge was constructed across the river. The Town prospered through trade and commerce, shipbuilding and nearby tobacco farming. By 1768, it became the Custom’s District of the region. Vienna was competing with a new town called Baltimore. 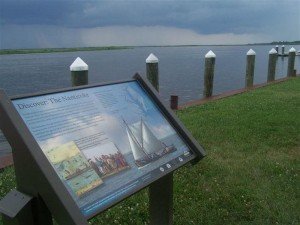 Interpretive signs along the waterfront describe Vienna’s and the Nanticoke River’s history.

During the Revolutionary War, Vienna was an important source of goods and supplies to the Continental Army. British vessels raided the town at least five times taking ships and provisions.

In the War of 1812, Vienna was again attacked by British forces. It is believed that during this war the town built a stone wall along its waterfront placing cannons on top. The wall was built from stones used as ballasts from the ships that anchored here. Remains of this wall can be seen southeast of the Customs House located on the corner of Water Street and Church Streets.

The Governor of the State of Maryland during the Civil War, Thomas Holiday Hicks, who is credited with keeping the State from seceding from the Union, was a former resident of the Town. Blockade Runners from the south made their way up the Nanticoke River during the war, where Confederate sympathizers from town outfitted them with vital food and supplies for the beleaguered rebels. 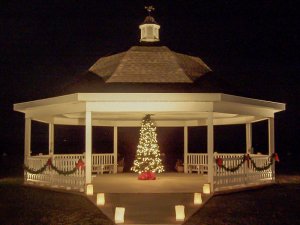 Vienna’s annual luminary festival has been a tradition for about 40 years.

The original town layout is still recognizable and significant examples of past architecture survive. In recent years, a determined effort has been put forth by the town and its citizens to save, restore and enhance this historical, cultural and environmental legacy for future generations.

“This quaint town is dotted with a lot of historic homes,” said Cindy McFarlane, town secretary. “They are private homes, but if anyone is interested in taking a historic walking tour of Vienna, they are all cited with descriptions in our walking guide.”

Another longstanding tradition is the annual luminaria night celebration. For nearly 40 years, Vienna also has lit up the streets each December with 1,500 glowing luminaries. Visitors can stroll, drive or ride the tram. The activities include open house tours, Santa, entertainment and refreshments. 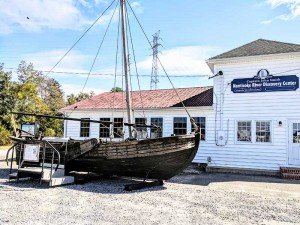 In celebration of the Smithsonian Water/Ways exhibit and Dorchester County’s 350th Anniversary in 2019, the town of Vienna arranged for the display of a full-size replica of Capt. John Smith’s Shallop (pictured above). The loan was supported by a Heart of Chesapeake Country Mini-Grant. The replica is of the small ship that Capt. Smith used in 1608 to explore the Chesapeake. Vienna was one of his stops more than 400 years ago. The shallop, which usually resides at the Chesapeake Bay Maritime Museum, was moved in October 2019 to Vienna and was on display for more than 10 months.

The project aligns with several goals and objectives of the Heritage Area’s Strategic Plan by encouraging tourists to explore and hopefully return to Vienna for other activities and events and helping residents of the town and county to realize the important contribution that living history events and programs can make to economic advancement. The project also promotes stewardship by “elevating the preservation, development and promotion of Dorchester’s maritime, marine and water assets for the enjoyment by residents and visitors.”