This month’s spotlight shines on Friends of Stanley Institute. Organized to save an 1865 one-room schoolhouse, the Friends group has embraced their commitment to preserve African-American buildings and heritage in many ways. Their work includes the restoration of the historic church across the street, supporting others with similar projects and serving as consultants on local archaeological excavations and research. 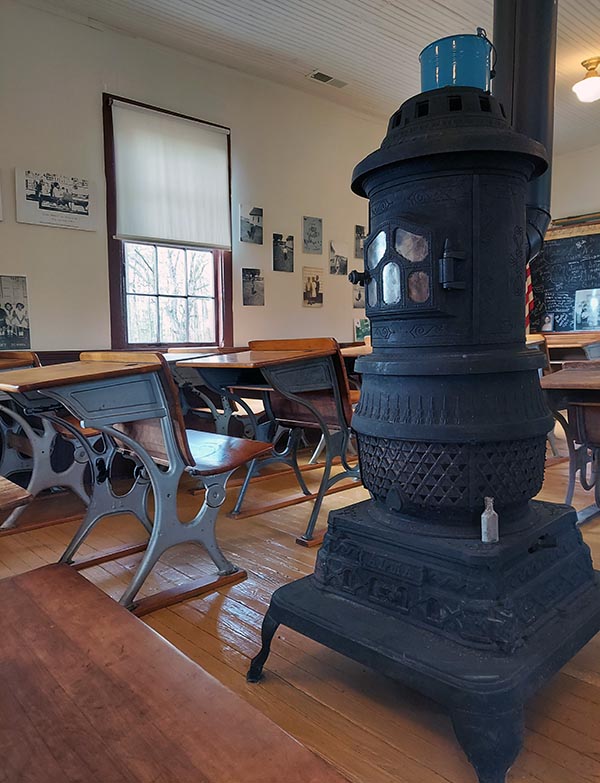 Vintage desks and an old pot belly stove were donated to the Stanley Institute during its restoration.

At the Stanley Institute, visitors can sit at desks more than a century old, admire the imposing pot-belly stove that commands the center the building, appreciate the certificates and report cards from the mid-1900s and imagine days long gone when African-American students trekked to this one-room school house to learn to read and write.

Thanks to Friends of Stanley Institute, this historic building continues to stand at the intersection of MD-16 and Bayly Road, where it was moved from Church Creek more than 150 years ago. Just as important, they have preserved an important element of African-American history in Dorchester County to share with generations to come.

“I feel pretty good about what we have done with the Stanley Institute. Saving this school was our biggest accomplishment, and then saving the church across the road. It’s amazing how far we’ve come.” – Herschel Johnson

Friends of Stanley Institute evolved from the Rock Improvement League, which William Kiah, a former teacher at the school, organized in 1966 to help preserve the building. He also led the effort to have the structure named to the National Register of Historic Places.

“If it wasn’t for Mr. Kiah, this building might not still be here,” said Herschel Johnson, president of the Friends of the Stanley Institute, who passed away in fall 2021. “It was in fairly good shape when we started our work.”

Johnson has been president since the Friends organization started. Its other members are Barbara Lake, Shirley Greene, John Ferguson, Sharlene Harris and Chantay Nelson. 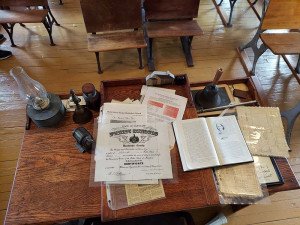 A teacher’s desk, old certificates and report cards were donated to the Stanley Institute.

The Stanley Institute is one of Maryland’s oldest schools organized and maintained by a Black community. Johnson notes that Dorchester County has had about 195 schools throughout its history. But not many of the older schools still stand.

Originally called the Rock School, the building was constructed in 1865 in Church Creek and moved to its present location at in 1867. It served as both church and school for the community until 1975, when Christ Rock Methodist Episcopal Church was built across the street. It is one of the oldest surviving post-Civil War African-American churches on the lower Eastern Shore. Friends of Stanley Institute also were instrumental in raising more than $350,000 to work on the church and fellowship Hall.

The Stanley Institute provided an education for grades 1-7 until 1944 and grades 1-6 through 1962. It was renamed the Stanley Institute to honor the Rev. Ezekiel Stanley, who spearheaded the formation of the school. The school’s renowned graduates include professionals with advanced doctorate degrees, ministers, educators and artists. One graduate, Dr. Thomas Kiah, studied at Cornell and Columbia Universities. He became a principal at Princess Anne Academy, now the University of Maryland Eastern Shore, where Kiah Hall, named in his honor, houses the university’s business, math and computer science programs.

“Children back in that day took advantage of their education at this school and did well,” Johnson said.

The Friends organization, as well as its individual members, are committed to preserving historic buildings and local heritage throughout Dorchester County. Johnson is passionate about the need for heritage organizations to support one another.

The Friends group has given advice and provided assistance to other organizations that have come together to protect or preserve historic churches in Dorchester County. Johnson also has consulted with Maryland archaeologists during their excavation at the Bayly house and cabin in Cambridge and at what is believed to be the home of Harriet Tubman’s father on property at Blackwater National Wildlife Refuge.

“I feel like we have done so much” Johnson said. “I wish people would do more preserving,” Johnson said. “I hate to see these historic buildings torn down. Preservation is important. A lot of people don’t know our story – African-American history in Dorchester County. We need to know our history.”

Restoration at the Stanley Institute and the Christ Rock Church was made possible by bonds, African-American preservation grants, donations and other sources of funding for historic projects. The Heart of Chesapeake Heritage Area has supported Friends of Stanley Institute with mini-grants, including one in 2019, which supported the design and printing of a promotional brochure. 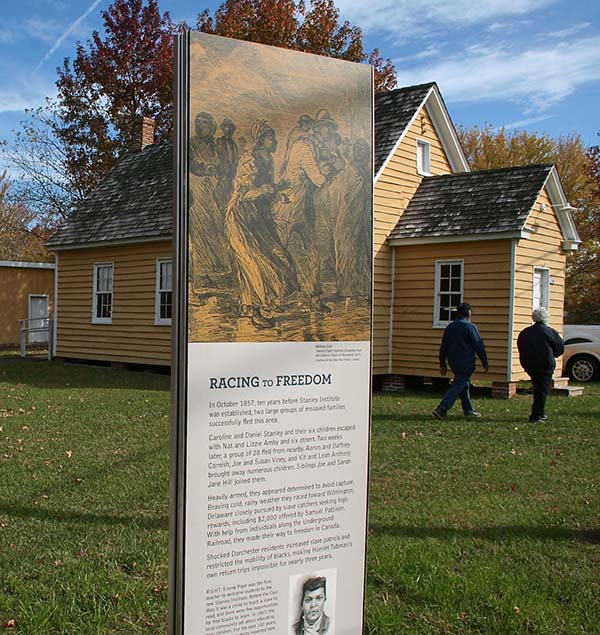 The Stanley Institute is Stop #6 on the Harriet Tubman Underground Railroad Byway. During a three week period in October 1857, 44 enslaved people in two large groups successfully escaped from farms near the there and in Cambridge. Five families carried 20 children with them.

Heavily armed, the freedom seekers were determined to avoid capture by bounty hunters. Almost caught near Wilmington, Delaware, the freedom seekers reached Philadelphia and then Canada with the help of black and white Underground Railroad agents. National newspapers called the escapes a “Stampede of Slaves.”