This month’s spotlight shines on the Spocott Windmill and Village, a reconstruction of a 19th Century community, which makes Dorchester County history readily accessible to the public at no charge while serving as a hub for active historical research that is underway at the site.

In March 1888, a severe winter storm destroyed John Anthony LeCompte Radcliffe’s Spocott Windmill. His 10-year-old son, George, rescued the millstones and steps from the mill and stored them in a barn, vowing to rebuild his father’s mill in his lifetime.

Over the years, George pursued careers in education, law and politics, eventually being elected to the U.S. Senate. But Sen. George L. Radcliffe never forgot his childhood promise. In 1972, the mill was reconstructed with the stones and steps he had saved and dedicated just in time for his 95th birthday celebration.

The mill is now part of a reconstruction of the 19th Century community found in Lloyds, on Route 343, six miles west of Cambridge, Maryland. The village is open dawn to dusk 365 days a year and includes a circa 1800 cottage, schoolhouse, doctor’s office, museum and store.

The site is named for the adjoining property, Spocott, which was settled in 1663 by Stephen Gary. It has been owned by the same family all these years. The site of farming and shipbuilding, Spocott was a completely self-sufficient community, and a windmill has been an integral part of that community for most of these years.

The Spocott Windmill Foundation is committed to continuing its research and restoration efforts, as well as maintaining and sharing this Heritage Area site and its history with the public at no charge. As with most non-profit heritage organizations, they rely 100 percent on volunteer assistance and are always looking for docents, millers and historians.

The Heart of Chesapeake Country Heritage Area has awarded the Spocott Windmill Foundation mini-grants to help fund brochures and displays to guide visitors through the complex. The Foundation plans to continue to develop resources that document the site’s history.

“Our goal is to make Dorchester County history readily accessible to the public at no charge and 365 days a year,” said George M. Radcliffe, Jr., a descendant of the original builder of the windmill and schoolhouse. 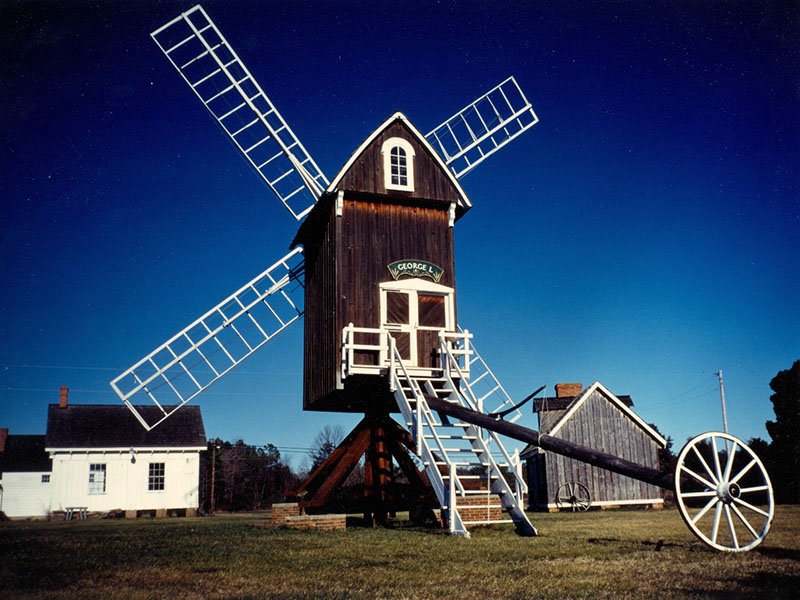 The Spocott Windmill was built by master boatbuilder James B. Richardson and is the latest in a succession of mills on that site. Named the “George L” in honor of Sen. George L. Radcliffe, the post mill, used to grind grain into meal, operates twice a year on dates posted on the Spocott Windmill website. It was one of at least 20 windmills in Dorchester County in the 19th Century.

The entire mill housing of the Spocott Windmill rests on one post, allowing the mill to easily be turned into the wind. Sails are raised on the four blades, and the mill can operate with at least a 10 mph sustained breeze.

The mill is a veritable monument to Jim Richardson, who had to design and build the mill without existing plans, working primarily from models he built. The beautifully crafted mill has already “outlived” its predecessor by 10 years. 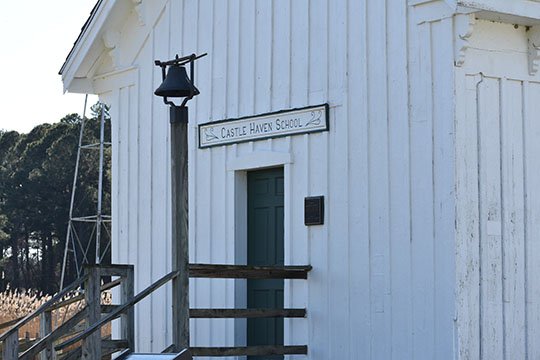 Built in 1870 by John Anthony LeCompte Radcliffe, this one-room Victorian building served as the local community school from 1871-1924. Both Sen. George L. Radcliffe and Jim Richardson attended this school. With no electricity or plumbing and heated by a coal stove, this school served community youth in first through eighth grades. Built across the highway on Castle Haven Road, it was purchased and moved to the Spocott property in 1930 by Sen. Radcliffe. 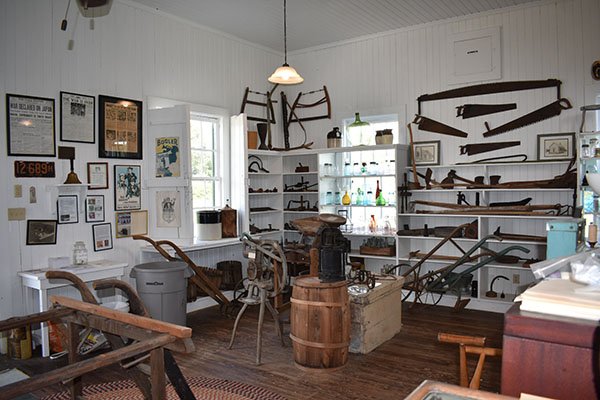 This building is a reconstruction of a 19th Century store which burned down in the 1930s. Rebuilt soon after, it served as both a community store and the Lloyd’s Post Office through the World War II period into the 1950s. It is now set up as a war era store and museum, filled with goods and implements both from Spocott and donated by members of the community. A second room serves as a reconstruction of Sen. Radcliffe’s congressional office (1935-1947).

The Spocott Village sponsors two major events each year, one coinciding with Earth Day in April and the other usually the third Saturday in October. Both include tours and a running of the windmill, assuming there is adequate wind. The Earth Day event also includes crafts, music, food, a tree giveaway, a county horseshoe tournament and reenactments. 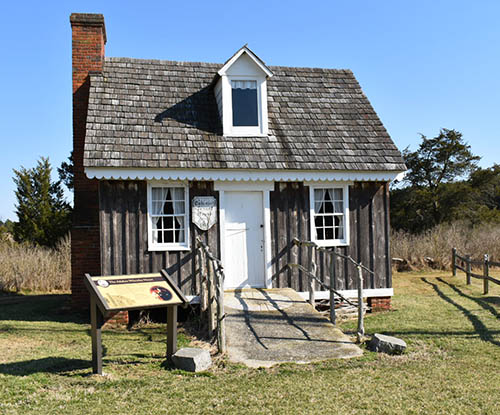 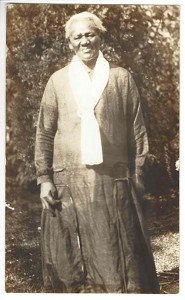 This early 19th Century cottage was the home of Adaline Wheatley and her husband Columbus. Adaline (1847-1929) was always free, as were her parents and grandparents. She spent her entire life at Spocott as cook, nurse, house manager and confidante. A nationally renowned cook, she graced the cover of a small Delmarva cooking brochure produced in the 1920s.

Born Adaline Morris, she married Columbus Wheatley in 1868, and they raised their seven children in this cottage. Adaline, whose cooking was referred to as “witchery in the kitchen,” never missed a day of work in her entire life and was lovingly referred to as “Aunt Adaline” by all who knew her. Columbus, a former slave at Spocott, served in the Union Army and Navy in the Civil War, and lived out the remainder of his life at Spocott, where he became well known as a master craftsman.

Adaline’s and Columbus’ descendants still were living in this house into the 1960s. The house has been restored to what it would have looked like in the early 19th Century. Adaline’s smokehouse is also on the Windmill property and is set up as the blacksmith shop, which was located there in the 19th Century. 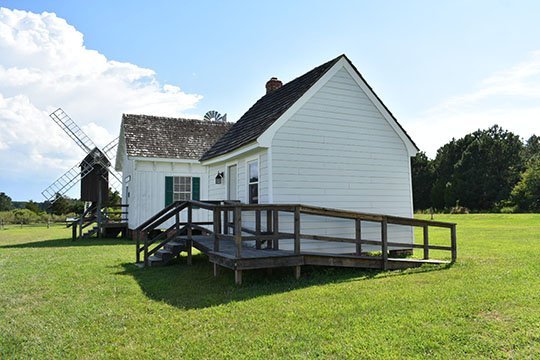 Still largely a work in progress, this circa 1800 building stands where William Byus LeCompte had a doctor’s office in the early 19th Century. LeCompte owned nearby Spocott at the time. The building is also named after the Muse family, well known for having 10 consecutive generations of physicians. The actual building, moved from Spocott, was the home of Kemp and Mintie Wilson, long-time Spocott residents and workers. The most recent addition to the Spocott Village, this building is still being equipped to represent what a doctor’s office would have looked like in the mid-19th Century.

The Spocott Windmill and Village serve as the hub for the considerable active historical research underway at the site, continuing research that was at the heart of Sen. Radcliffe’s efforts at historical preservation. Spocott was part of the inspiration for James Michener’s Paxmore family in Chesapeake. It was Sen. Radcliffe’s wish to make this history available to the community, always at no charge, said George M. Radcliffe, Jr., president of the Spocott Windmill Foundation and a descendant of the original builder of the windmill and schoolhouse.

Sen. Radcliffe (1877-1974), a confidante to two U.S. presidents and 60 years an officer of the Maryland Historical Society, spent his life preserving history beginning with saving the Baltimore Shot Tower in 1924. He was largely instrumental in the preservation of Grace Church and the Chapel of Ease on Taylor’s Island and Old Trinity Church in Church Creek.

The village and most of the buildings are open daily from dawn to dusk, and tours can be arranged by contacting the organization. Tours are run throughout the year for school groups, seniors, tour groups, and any larger family groups. Spocott can cater tours for ages five through senior citizens.

The mill is visited informally by thousands each year with records showing visitors from all 50 states and more than 20 countries. Most buildings are open daily, and brochures and numerous displays can guide visitors through a tour of the complex.