This month’s spotlight shines on the Richardson Maritime Museum and Ruark Boatworks, as they move forward in the development of a maritime complex on  Cambridge Creek at Maryland Avenue and Hayward Street. 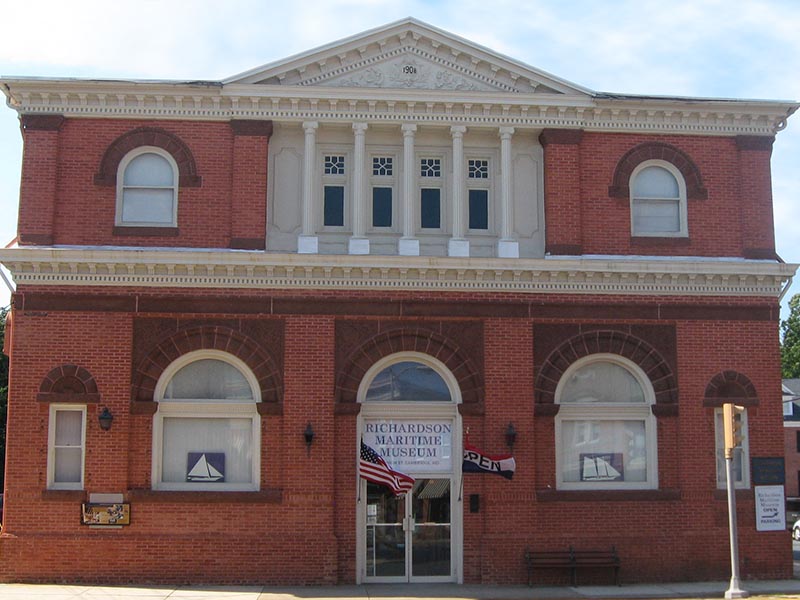 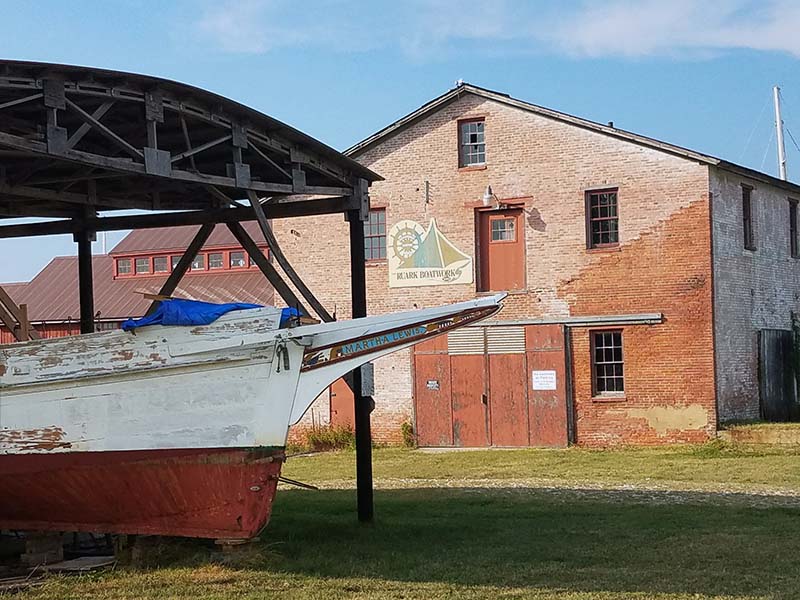 The Richardson Maritime Museum is moving forward with the development of a new maritime campus as it carries out its mission to preserve and promote the maritime heritage of Dorchester County and the Chesapeake Bay area of Maryland.

In the 27 years since a small group first met to discuss their vision for a museum honoring James B. Richardson and others, the resulting facilities, maritime collections, exhibits, programming and overall reach have expanded significantly, bringing the organization to an exciting point in its development.

The Richardson Maritime Museum officially opened its doors at its current location on High Street in April 1996. Eventually,  the concept of preserving the skills of local boatwrights was brought forward. As a result, a waterfront property on the Cambridge Creek at Maryland Avenue and Hayward Street was purchased in 2002, and the last building remaining from Cambridge Manufacturing was converted to the Ruark Boatworks. The facility began operating in 2003 with the task of building and repairing boats, all the while preserving and promoting the boatbuilding skills of the area.

The next growth of the organization was two-fold. The collection and archives of the Brannock Maritime Museum, which contains significant Dorchester County, State of Maryland and U.S. Maritime history, were acquired. The need for a larger boatworks facility was fulfilled in the construction and opening of the current Ruark Boatworks facility in 2013.

Development of a Maritime Complex

“Currently, the organization is at a crucial point in the development of a maritime complex at our Maryland Avenue location by preparing to consolidate all business operations to the one physical location,” said Jane Devlin, executive director of the museum.

The building at 401 High Street has been sold with plans for the building to be vacated in 2020. The existing brick building at 103 Hayward Street will be rehabilitated and re-purposed to house the museum’s permanent collection, related support services and administrative operations at one highly-visible site, accessed by land and water.

In preparation for the relocation, a guest curator with the assistance of staff and professionals will develop a new conceptual framework and narrative to interpret the collection and a concept for installing the exhibition in the museum building. The Maryland Areas Heritage Authority recently awarded the museum a grant to support the exhibition plan. 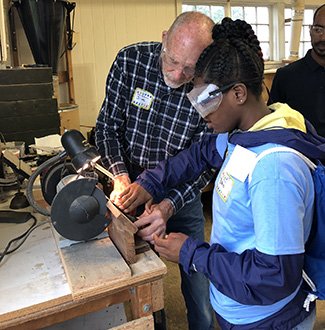 Volunteers worked with students to give them a taste of marine trades during the Underground Railroad Regatta.

In 2019, the boatworks facility has worked on two vessels built by Bronza Parks, a renowned Dorchester County boat builder. The Lee Sar, a cabin cruiser built in 1951 for the Fifer family, was donated to the museum by the family to ensure that the vessel continues as a pleasure boat. After a successful auction in June, the vessel is now owned by Doug Marshall. The Martha Lewis, a skipjack built by Bronza Parks in 1955 and now owned by Chesapeake Heritage Conservancy, is in the process of being restored. The boat will be U.S. Coast Guard Certified for public transport and will return to her home port of Havre de Grace, Maryland, as an educational vessel upon completion.

The consolidation of operations will enable the museum to expand its educational efforts aimed at youth. For years, the museum has partnered with local schools to organize educational field trips to visiting historic vessels. The vessels act as classrooms where youth experience living history while they are introduced to the opportunity of a marine trade career. These educational programs have been supported in the past through the Heart of Chesapeake Country Heritage Area Mini-Grant program.

The organization also has conducted youth programs at the boatworks facility. In 2018, a partnership was formed with Harvesting Hope Youth and Family Wellness, Inc., and Marine Arts Workshop to develop a program for local youth as an introduction to the marine trades and recreational side of the boating world. The success of the program has resulted in the transition from a pilot program to an annual event. 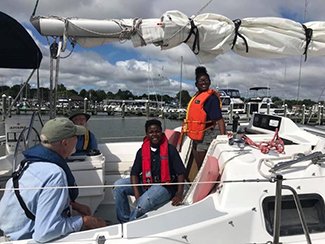 The Underground Railroad Regatta provided students with an opportunity to learn to sail.

The future expansion of Richardson programs will be through the development of a Marine Trades School. The school has gone from concept to the early stage of development. In 2018, the Richardson was contracted by the Department of Natural Resources (DNR) to conduct an introduction to the marine trades program for unemployed and under employed adults. The program was successful in attaining the goals established by DNR, however, DNR has since decided to focus future programs in the environmental science field, leaving the opportunity for the Richardson to secure funding directly from similar sources to establish a marine trades based program in Cambridge. The school will be a certified facility that will provide a placement service for the graduates.

“In the course of a year, thousands of individuals are introduced to the Richardson Maritime Museum experience,” Devlin said. “Local residents, independent travelers, youth groups and tour groups step through our doors. After a warm greeting by our knowledgeable volunteer docent, the visitors are immersed in the rich maritime history of Dorchester County.

“The staff, board members and volunteers work continually to maintain the existing facilities, enhance the visitor experience, implement projects, organize events and network within the community and the industry. The work is never ending with the final result being viewed by the public; yet, the underlying immeasurable minutiae always hidden from view.”

The Maryland Heritage Areas Authority awarded the Richardson Maritime Museum a grant in FY 2020 to create an exhibition plan for its permanent collection. The organization is preparing to consolidate all of its exhibits and assets on its nearby waterfront campus. With a new prominent location, improved campus and professionally designed and interpreted exhibits, the museum will be well-positioned to showcase the maritime heritage of Dorchester County and to enhance heritage tourism opportunities.

The Heart of Chesapeake Country Heritage Area also has awarded the museum mini-grants, most recently in FY 2017 in support of its “Cambridge Schooner Rendezvous,” which brought together schooners and other historic vessels for public viewing at Long Wharf. 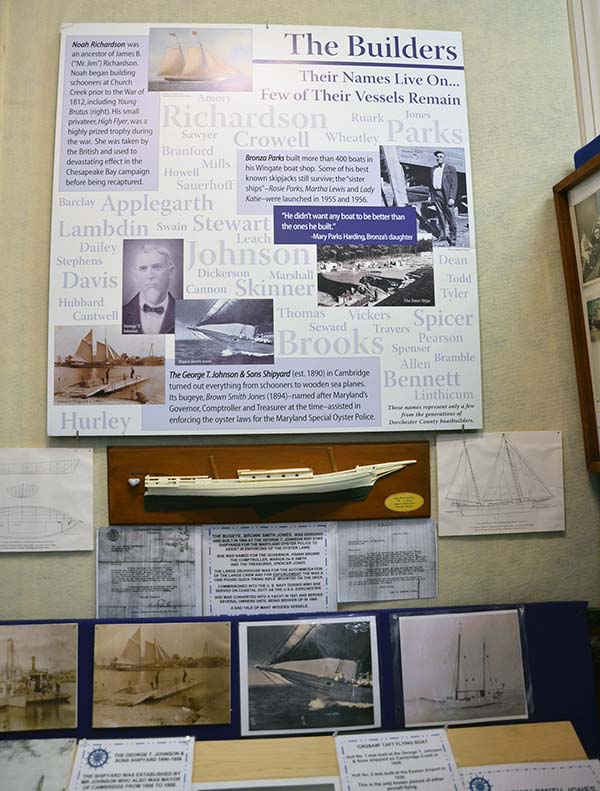 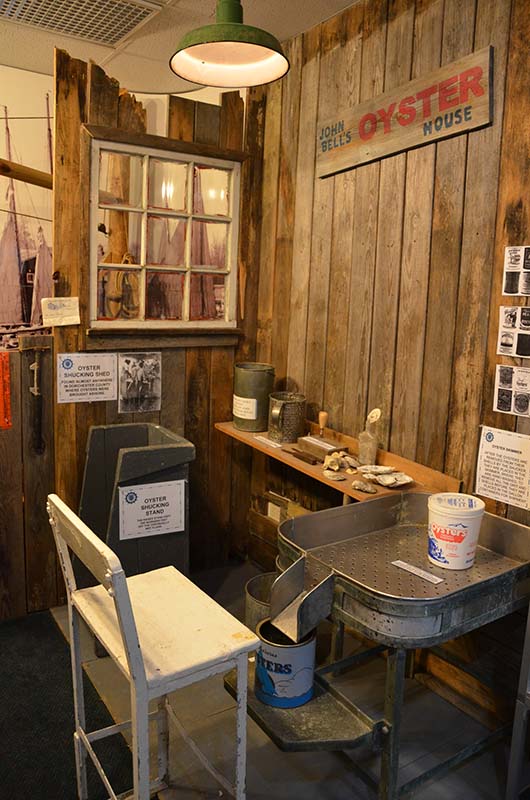