This month’s spotlight shines on the quaint Town of East New Market, the first municipality in Dorchester County to be listed in the National Register of Historic Places. As one of the founding members of the Heart of Chesapeake Country Heritage Area Management Board, the town has long been a dedicated advocate for protecting and preserving Dorchester’s rich history and heritage.

Rooted in the Past, Looking Toward the Future 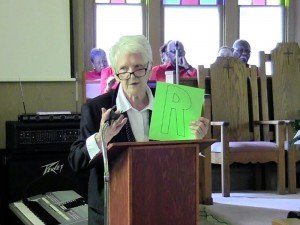 As one of the founding members of the Heart of Chesapeake Country Heritage Area Management Board, the Town of East New Market has long been a dedicated advocate for protecting and preserving Dorchester County’s rich history and heritage. But that should come as no surprise.

East New Market’s own history goes back more than 360 years. Moreover, in 1975, it became the first municipality in Dorchester County to be listed in the National Register of Historic Places. Now, it is still one of only two, with the City of Cambridge holding Dorchester’s other historic designation.

“The link with the past is tremendously important to me,” said East New Market Mayor Caroline Cline. “Our informal motto here in East New Market is Rooted in the Past, Looking toward the Future.  I have been involved with the heritage board from its very beginning, before it was even officially recognized by the county in 2002. I think the Heritage Area is the cornerstone of preserving the best elements of the past, which will serve us well in the future.” 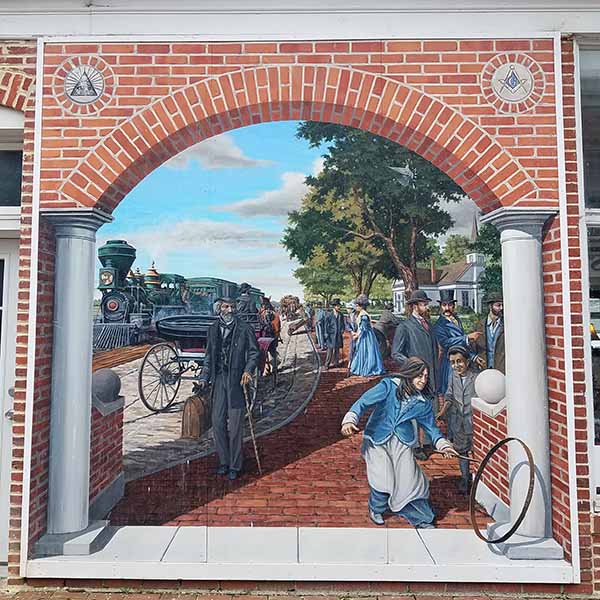 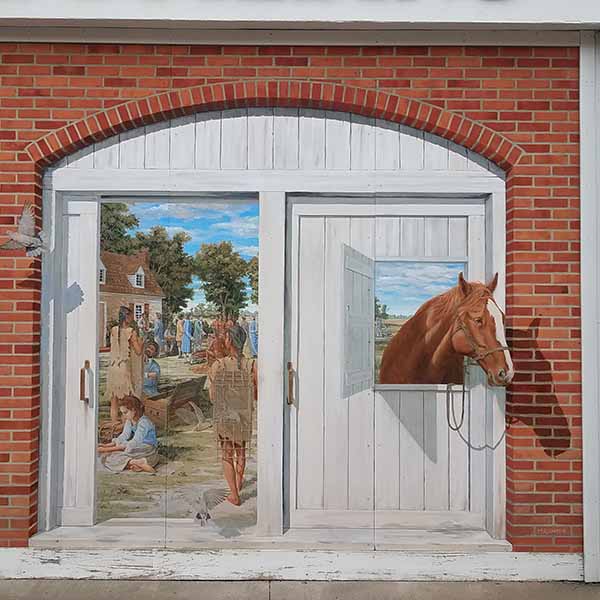 The two murals above, designed by Michael Rosato, depict East New Market’s history. They adorn two buildings in the center of town and are part of the Visit Dorchester Audio Tour Guide.

First documented as a settlement by mapmakers in 1660, East New Market showed up on the earliest maps as located near “Fort Warwick.” Those early records show that the town was recognized as more than just a settlement. It was known as an Indian Trading Post.

Henry Sewell, who was a friend of Lord Baltimore, received the first land grant in that area in 1649. Other early land owners include the O’Sullivane (later “Sullivane” without the “O”), Ennalls, Rix and Manning families. Those names are inscribed on old land records, and there still are descendants in Dorchester County today.

Incorporated formally in 1839, East New Market opened its first post office in 1803, which was early for those times. As an Indian Trading Post, it remained a trading center for the northern reaches of Dorchester County for decades.

Churches at every entry

In its early days, the land around East New Market was primarily used for farming. Then when it was being subdivided, it became a residential enclave with a church at every primary entry point in town. Those church buildings, some dating to the mid-1800s, are testaments to the town’s dedication to preserving its heritage. Several are excellent examples of how re-purposing a building can preserve important, historical landmarks. The four churches that marked the entries into town are:

Today, East New Market has a population of about 500, far less than the 1,600 residents in 1900. The decline, is due in part, to two great fires that occurred in the 1800s and early 1900s. In addition, the construction of the bridge over the Choptank River served to divert traffic that would have been traveling through the town. But the decline in population actually may have come with a silver lining, according to Cline.

She credits Dr. Fred Tidwell, who was instrumental as a preservationist in soliciting funding and seeing the town earn a listing on the National Register of Historic Places. His legacy is endures.

Cline cites the development of Friendship Park as one of town’s most recent significant projects. There had been one remaining large block of open space in town, and it was Cline’s vision that those 12 acres be developed into a park. The tract was up for development, and a proposal called for 21 houses.

“It was important to preserve the ambiance of this small town,” Cline said. “We applied to the state for re-purposing it and received a large grant for that. We also got funding from Eastern Shore Land Conservancy and many private donors. So now that beautiful, open tract is known as Friendship Park. I saw this as becoming, not just a park, but a gathering place for our small town. People have birthday parties at the park. We have an annual community day that draws people from all over the area. It has been a wonderful thing for the town.”

Friendship Park includes the Storybook Trail, which was supported by the Dorchester County Health Department. Their popular Little Free Library is on this site, as well as a children’s playground there. They recently received a state community parks and playgrounds grant of $160,300, which will be used for exercise equipment for adults.

Note: This story has been corrected to clarify that Friendship Park only is open to the public. Friendship Hall is a private residence.

What was familiarly known as the trading post became repurposed as a town hall meeting place in the early 1990s. The repurposing would not have been possible without funding from state agencies. This past year, the Heritage Area provided the town a $1,500 mini-grant for display cases and lighting for artifacts that will be on exhibit at the East New Market Trading Post Museum.

The ongoing restoration of the East New Market Train Station would not have been possible without MHAA grants and Heritage Area mini-Grants. MHAA awarded the town $5,000 in grant money this past summer for Furnishings, Lighting, and Display Equipment for Train Station Museum. This follows a $42,000 MHAA grant in 2018 for rehabilitation of the Train Station Interior.

“Without the support of MHAA, it is unlikely that the town of ENM would have achieved the level of success that we have enjoyed in terms of our commitment to historic preservation.” – Mayor Caroline Cline 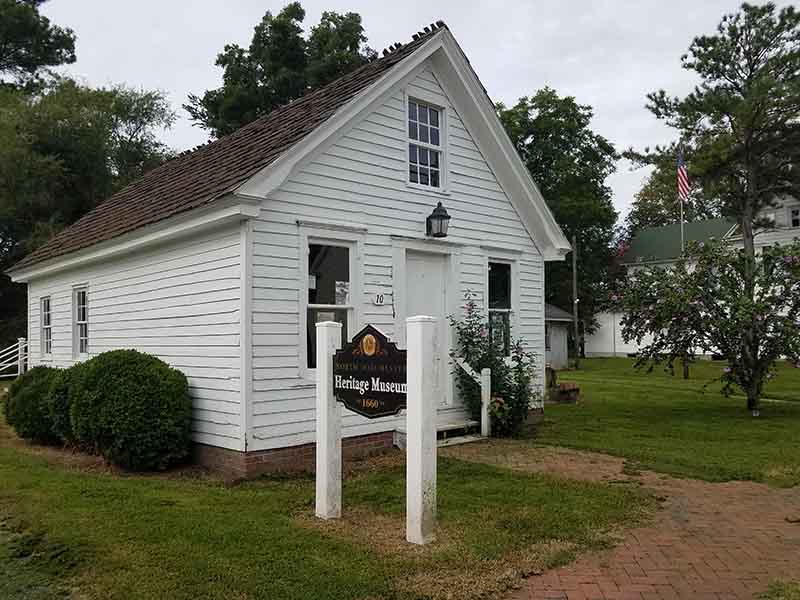 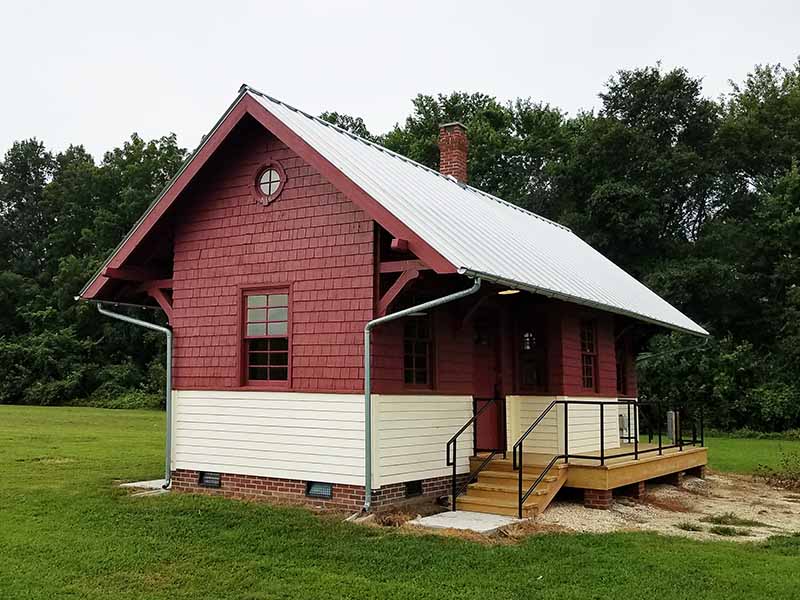 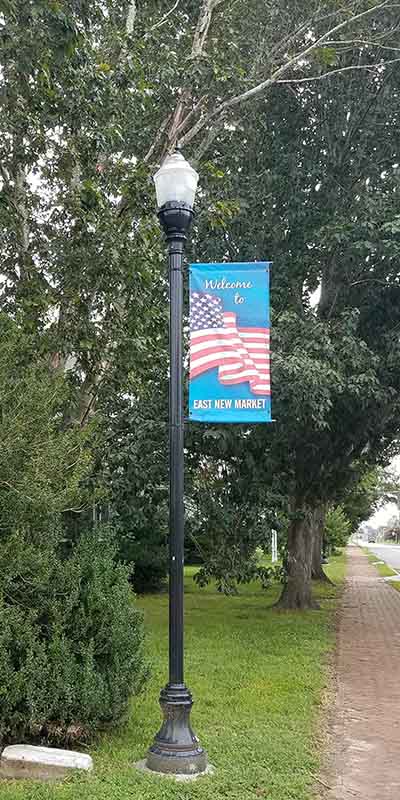