This month’s spotlight shines on Cambridge Main Street (Downtown Cambridge), an organization central to the coordination and evolution of Cambridge. They help guide and work with businesses and individuals in preserving the unique heritage and nature of the community as they also encourage the growth and future of Cambridge.

Soul of the Shore

The tagline “Soul of the Shore” couldn’t be more appropriate for Downtown Cambridge, an organization that supports, uplifts and celebrates all that is dear to the Heart of the Chesapeake. From festivals inspired by local heritage to beautification projects that showcase historic sites and businesses, Downtown Cambridge is committed to inclusive and wide-ranging endeavors that enhance the community. 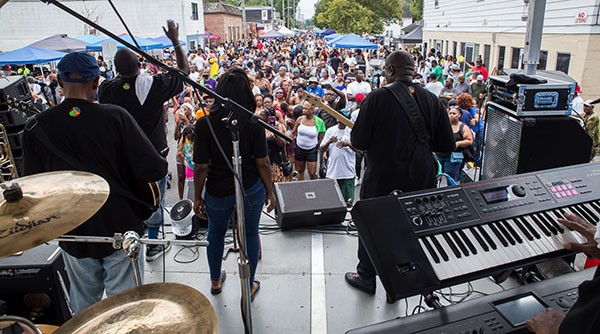 Until the 1980s, the focus of economic development in Cambridge was based on industrial development. A group of four independent businessmen, Charles Kelley, George Hyde and John McGinnis were central to shifting the focus to downtown improvement and focus. The first effort at this was the creation of the Downtown Cambridge Business Association with a monthly newsletter and membership dues; membership was as high as 200 at one point. The group evolved into the “Association for the Revitalization of Cambridge” (ARC) in 1990, with ARC being formally organized into a 501c3 in 1995.

The organization’s current evolution arrived when the group applied for and became a member of the Maryland Main Street program in 2003 and became Cambridge Main Street in 2003. In 2018, the organization underwent a formal branding process and has been including the marketing tagline of ‘Soul of the Shore’ since then. 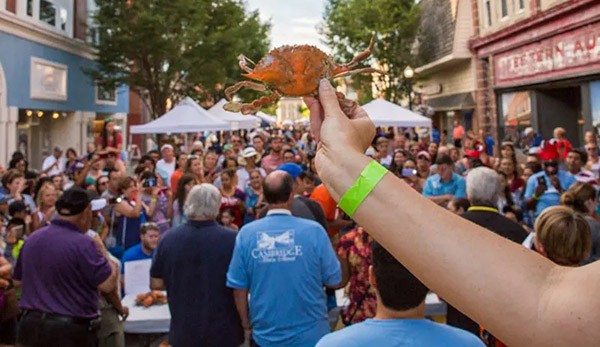 Festivals like Downtown Cambridge’s Taste of Cambridge highlight the watermen and maritime heritage of Dorchester County.

From flower beds to bigger projects

The organization started out with small goals, adding flower beds and containers, cleaning up at the marina and advertising. There were also efforts to begin seeking grants and funding for larger projects.

They have grown as an organization but maintain mission and projects consistent with those early goals. For example, just a couple of years ago, they were a partner in the funding and creation of the Community Garden at Waugh Chapel, and they are responsible for planting and maintaining the beautiful hanging flower pots throughout downtown in the summer months.

“We have grown to have larger visions than our original roots,” said Michelle Barnes, Downtown Cambridge president. “We no longer have membership, but rather follow the Maryland Main Street model and the National Main Street Model. That model focuses on four points: economic vitality, organization, design and promotion. We try to follow that model in all of the varied activities and projects and relationships we are involved in. We are always working to assist downtown businesses, bring new business to the area and promote the uniqueness of downtown Cambridge.”

They are the only Main Street program in the state that receives no operating assistance from either the city or county governments. Accordingly, they rely on fund-raising activities, donations and grant opportunities. The popular Taste of Cambridge, Groove City music festival and more are not only crowd-pleasing and fun, they are a direct source of operating funds. However, with COVID cancelling all of their fund-raising activities, they are working to find alternate ways to sustain their operating costs.

Cambridge Main Street maintains multiple partnerships. They regularly work with the City Marina in coordination of their advertising and presentation of the waterfront. We also coordinated Dorchester Center for the Arts, Dorchester Tourism and the Heart of Chesapeake Country Heritage Area to bring the Smithsonian Water/Ways Exhibit to downtown Cambridge in 2019.

They maintain a weekly Farmer’s Market at the waterfront during the summer and fall months. In addition, they support heritage connections in their long-standing work with Pine Street projects such as banners, murals and events.

“Grants are an important part of the work that we do. They allow us to help move many projects forward. We have projects that focus on the appearance of downtown, the renovation of buildings and drawing interest to our downtown.”
– Michelle Barnes 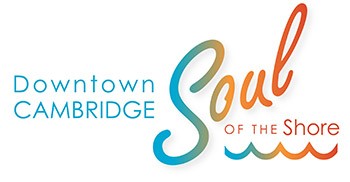 Volunteers are at the core of every project they take on. They hang Christmas decorations, sell tickets and work shifts at festivals and special events, participate in public art projects and more. More information and a volunteer from are on the Downtown Cambridge website. 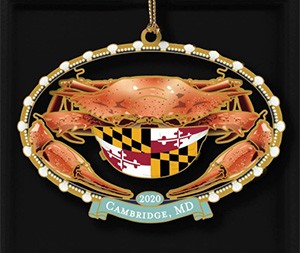 Downtown Cambridge’s annual ornament is a tradition that commemorates the community’s heritage while raising funds for the organization.