Jay Meredith displays an old newspaper article – one of the many artifacts in his collection that tell the story of Harriet Tubman and the Bucktown Village area. He is seen here in a scene from the 360-degree video in which he takes viewers on a virtual tour of the store.

This month’s spotlight shines on the Bucktown Village Foundation, a dedicated and respected leader committed to the preservation and promotion of the heritage of Bucktown, Maryland, the childhood home of Harriet Tubman, as well as to developing partnerships with other organizations with a similar interest in preserving the heritage of Dorchester County and the Eastern Shore. 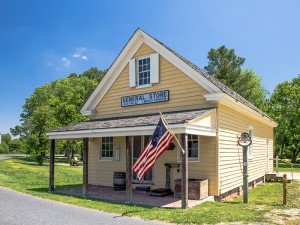 Established in recognition of the need to preserve and promote the heritage of Harriet Tubman’s childhood home, the Bucktown Village Foundation has become a leader in uplifting the broader story of the Underground Railroad in Dorchester County and throughout the Eastern Shore. The foundation has embraced and expanded its mission to reach and elevate the rich history of all of Dorchester County and the Eastern Shore. 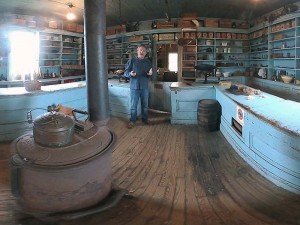 Jay Meredith explains the work they have done to preserve the store.

“We purchased the Bucktown Village Store out of necessity to make sure it would be preserved in perpetuity,” Jay Meredith said. “We saw the need to preserve the important history of the store. We didn’t know how we were going to preserve it, but we knew it needed to be saved.”

Their project quickly drew the interest and support of historians and preservation experts, who recommended that the Merediths seek grants to help fund their project needs. To be eligible for many of the preservation grants, they needed to have non-profit status; therefore, they founded and incorporated the Bucktown Village Foundation as a 501c3.

“The non-profit’s focus was broader than just preserving the store,” Jay Meredith said. “We are committed to the legacy of Harriet Tubman and preserving other buildings in the Bucktown area and Dorchester, as well. One way the foundation has expanded is that we have preserved an additional piece of property with a perpetual easement with the Maryland Heritage Trust. We want to preserve the landscape and have the land that abuts the property with the store protected.” 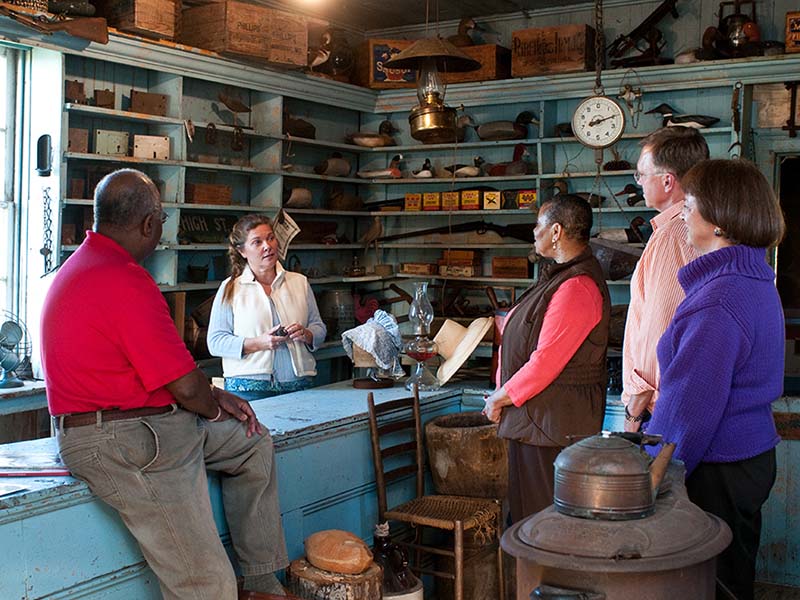 Above: Susan Meredith talks to visitors inside the Bucktown Village Store.

The property that set this all in motion is the Bucktown Village Store, an authentic 19th century country store. It was at this location that Harriet Tubman received a blow to her head that fractured her skull while she attempted to assist a fellow enslaved man. This has been called Tubman’s first public act of defiance. As a result of the injury, she experienced lifelong health problems and spiritual visions that changed her views and guided the rest of her life.

Preservation of this building was listed as a priority project in the Heart of Chesapeake Country Heritage Area 2013-18 Strategic Plan, and the Heritage Area worked with the Bucktown Village Foundation applying for grants and receiving network to Freedom designation for their guided tours.

Collaborating with the Merediths, the Heritage Area is in the process of enhancing the Bucktown Store stop on its Harriet Tubman Underground Railroad Byway cell phone app. The new content will take viewers back in time so that they see the Bucktown crossroads just as it was in the mid-1800s. The Augmented Reality/Virtual Reality segment also will feature the stories of Bucktown residents who share their connections to the crossroads.

Giving Back to the Community

The Merediths and the Bucktown Village Foundation also have deep community roots. They have hosted groups of inner city children who have camped on the store property and participated in programs with reenactors playing Harriet Tubman and historians giving presentations to help them understand the significance of the Underground Railroad.

In addition, Jay Meredith serves on the Board of Directors for the Heart of Chesapeake Country Heritage Area.

“My role is to support the heritage area, the grant programs and the people who have significant heritage projects,” he said. “It’s important to represent those people and programs. If you look back over the years, if you didn’t have the heritage area, a lot of that would be lost, and it wouldn’t be just buildings.”

The Bucktown Village Foundation has received mini grants from the Heart of Chesapeake Country Heritage Area, as well as founding from the Maryland Heritage Areas Authority, as well as from other heritage-focused organizations such as the Maryland Historical Trust. These funds have aided the Foundation in its quest to provide interpretation and to preserve the historic store building as well as to acquire and preserve other nearby historic properties.

“It’s important to preserve the legacy of Dorchester County. That’s significant to me. So much has been lost over the years by not having people stand up and support it. We have a good, positive legacy. There’s so much that Dorchester County has to offer in the way of its heritage that sometimes people take it for granted. It’s important to remember and understand it.”
– Jay Meredith, Bucktown Village Foundation

Open by Reservation Only

Jay Meredith takes you on a tour of the store and displays some of the artifacts from their collection in these 360-degree videos.