This month’s spotlight shines on Alpha Genesis Community Development Corporation, whose efforts highlight our heritage and connect our community through the shared experience of art and culture. Alpha Genesis has evolved from orchestrating community conversations at the Art Bar to now producing fabulous public art projects and implementing programming that supports those events. 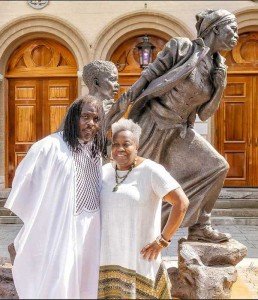 Jermaine Anderson and Adrian Holmes at the unveiling of the Harriet Tubman sculpture.

Honoring a mission inspired by the legacy of her father, Adrian Holmes is growing Alpha Genesis Community Development Corporation into an organization that is in the forefront for orchestrating community conversations and producing public art projects that unite, enrich and uplift Dorchester County.

Alpha Genesis was originally founded in Philadelphia by Holmes’ father, Rev. John Green, Jr, who was active with his wife in their church and community. The program served woman and children after school and in summer camp.  After Holmes’ parents passed away, she decided that bringing Alpha Genesis CDC to Cambridge was the best way to honor their legacy of community service. The organization was incorporated in 2012 and became a 501c3 in 2015.

“We started our programing at the Art Bar, when we were on High Street, with Drum Circles and intense community conversations called the Corridors of Consciousness,” Holmes said. “This past year, we hosted Art in Park at Cornish Park, presented at the T. Payne Lucas Africa Policy Forum, sponsored a youth trip (20 students and seven adults) to three African Embassies in Washington, D.C, and were the catalyst for the creation of You Don’t Know Nothin’ Bout Groove City, which premiered in February 2020 and received the Chesapeake Film Festival’s Best Documentary Feature Award for 2020.

“We also sponsored the creation of the Black Lives Matter mural on Race Street which had over 75 volunteers come out to help paint. We sponsored 20 children to attend a virtual summer trip to Ghana with the ABEN (African Black Education Network) community. And we hosted the second annual Day of Resilience where we exhibited a beautiful sculpture of Harriet Tubman on the Dorchester County courthouse grounds.” 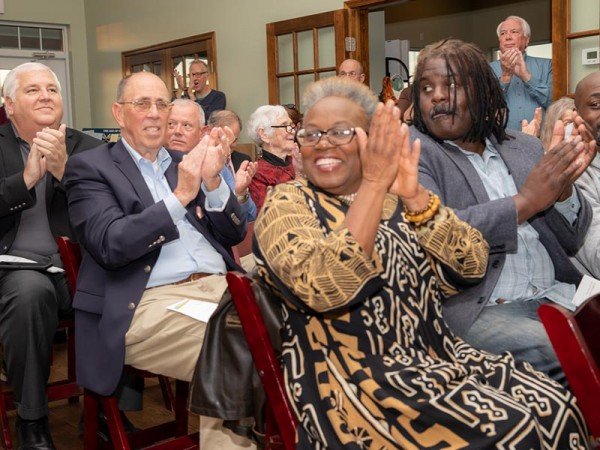 Adrian Holmes and Jermaine Anderson (front center and right) at the 2019 Heritage Area Awards Reception, where they received the award for Heritage Project.

Alpha Genesis was honored in 2019 for their first Day of Resilience, which was named Outstanding Heritage Project by the Heart of Chesapeake Country Heritage Area. Their event provided recognition and reflection on the 400th anniversary of the arrival of the first Africans to be sold into bondage in North America in 1619. The celebration highlighted the cultural heritage of Dorchester’s African-American community and inspired a new appreciation and understanding of this heritage for the hundreds of attendees.

The Alpha Genesis Community Development Corporation (AGCDC) believes in the power of Art, Culture, Education and Community … and in the synergy and collective creativity of that collaboration.

Together they form the building blocks that enable the “building of Blocks”— economically strengthened neighborhoods and communities, rich in culture, history, and purpose.

Neighborhoods that paint a picture highlighting our similarities and supporting the individual and collective narratives of our City.

Alpha Genesis has received two mini grants from the Heart of Chesapeake Country Heritage Area. The first grant helped pay for bringing the Harriet Tubman sculpture to Cambridge, and the second grant paid for the Universal African Dance and Drum Ensemble performance during the Day of Resilience ceremony and sculpture unveiling on Sept. 12, 2020.

“The Harriet Tubman exhibit has helped to fulfill Alpha Genesis’ mission to promote thought-provoking conversation through art and culture. It has also promoted tourism and economic development during COVID-19, as well as provided some political nudging for neighboring counties.”
– Adrian Holmes 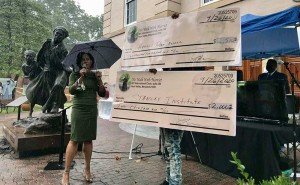 During a community meeting in September to discuss bringing a sculpture permanently to Cambridge, Linda Harris surprised the crowd by presenting donations to the Harriet Tubman Museum and the Stanley Institute. She recently had completed a trek walking the Harriet Tubman Byway and told the group she is committed to helping with their endeavor.

Alpha Genesis is committed to bringing a Harriet Tubman sculpture to Cambridge. Their first community meeting in September drew more than 30 supporters. If you are interested in joining their efforts or getting involved with their other projects, contact them by filling out their online form.