Above: A screenshot from the AR/VR experience at the Bucktown Crossroads site on the Byway App.

Just in time for Black History Month, the Harriet Tubman Underground Railroad Byway has been updated with new augmented reality and virtual reality experiences that bring to life the powerful stories connected to four of the sites. With the free audio guide, you can embark on this dramatic tour along the Byway on Maryland’s Eastern Shore, exploring landscapes that Tubman knew as a slave and from which she fled as a young woman. The new AR/VR experiences are: 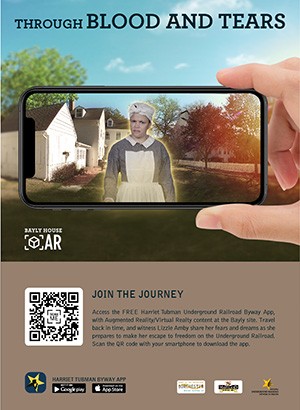 The Bayly stop features a hologram of Lizzy Amby sharing her plans to escape.

See the intersection at 4303 Bucktown Road, Bucktown, transform to what it might have looked like as a bustling crossroads in the mid-1800s. If you do a 360 spin with your phone at the site, you will see the store, blacksmith shop, barns and houses, as well as farm animals and people in the scene.

There are four people who are clickable. Each tells his or her own story. They represent the people from all walks of life who frequented these Bucktown crossroads: A fur trader who does not own slaves, a free black man, an enslaved woman, and a slave trader.

Watch a hologram of a reenactor depicting Lizzie Amby, who was enslaved at the Bayly house and escaped from slavery through Harriet Tubman’s network. She shares her hopes, dreams and fears as she plans her escape. The Bayly house, at 207 High Street, Cambridge, is a private residence but can be viewed from the sidewalk.

A new stop on the Byway, the Bayly House recently received one of the iconic, three-sided Byway markers. It is know that Alexander Bayly did own slaves and advertised in the local newspaper for Lizzy Amby’s return after her escape. 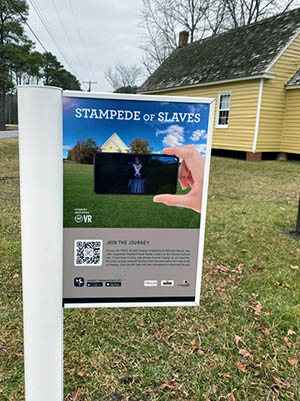 Watch as Harriet Tubman recounts her plans to help two groups escape from nearby plantations. The Stanley Institute site on MD Route 16 in Cambridge transforms to what it would have looked like in the mid-1800s during a nighttime escape, and an actress portraying Harriet dramatically impresses upon you the extreme risks and danger that await.

She describes their determination and provides details that include the numbers of children, family members who had to be left behind and even how they had to deal with especially horrid weather the night of the escape. She uses Harriet’s own words to help you understand Harriet’s own unwavering commitment to assisting others on their journey north to freedom.

Although you cannot go up to the privately owned house at 3531 Seaman Road in Preston, from the end of the drive, you can use the app to see what the Leverton house would have looked like in the 1800s. An actor portraying Arthur Leverton describes the perils of his family’s efforts to help freedom seekers head north.

His story shows how assisting enslaved people with their right to freedom also came with a high price for the abolitionists. The Levertons and their neighbor and fellow Underground Railroad conductor, Daniel Hubbard, a free black farmer, were forced to flee Maryland for their own safety because of their efforts helping others.

What is noteworthy about these new experiences is the crossover and connection with other Harriet Tubman stories told in Dorchester County, said Julie Gilberto-Brady, manager of the Heart of Chesapeake Country Heritage Area.

“We used pictures of people in the documentary shown at the Harriet Tubman State Park, and we borrowed costumes used in their film,” Gilberto-Brady said. “We also have the same actress portraying Harriet Tubman.”

The Harriet Tubman Underground Railroad Byway was designated as one of the best driving tours in the nation in 2009 by the Federal Highway Administration for its scenic beauty and significant history. In addition to recounting Harriet Tubman’s remarkable life story, the Byway reveals the story of slavery and the pursuit of freedom on the Eastern Shore of the Chesapeake Bay. It weaves through a rare landscape, virtually unaltered for more than a century.

Download the free app from the iPhone App or Google Play stores. Search for “Harriet Tubman Byway.” If you already have the audio guide on your cell phone, you will need to delete it and reinstall the updated version with the new experiences.

Read more about the Byway …