For Rhonda Aaron, this time of year is all about muskrat. She’s practicing her skills at skinning the furry rodents that live in our local marshes. She’s experimenting with muskrat recipes. And she’s gathering up her muskrat memorabilia—a stuffed muskrat here, an old photo there. It’s all for the 71st annual National Outdoor Show, a one-of-a-kind event happening Feb. 26-27 that celebrates rural Dorchester County culture with a mix of muskrat skinning, trap setting, and goose calling contests, plus gun dogs, oyster races — and tiaras.

Each year, the Outdoors Show crowns a young beauty queen as Miss Outdoors. But you could call Rhonda Aaron the long-reigning queen of the show. We sat down with her recently to hear more of her story. Rhonda grew up on Hoopers Island here in Dorchester County, where her uncles and grandfather farmed and worked the waters of the Chesapeake Bay in the warm months—and turned to trapping muskrat to bring in money in the cold months. She remembers how they would bring a sack of ‘rats into the kitchen and skin them by the woodstove. 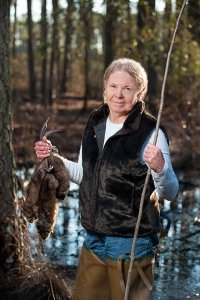 She didn’t do much skinning herself until her son Justin started trapping when he was in school. When he brought home a lot of ‘rats, she would help. Soon she was putting her skinning talents to the test at the muskrat skinning world championships at the National Outdoor Show in Golden Hill, a tiny blip of a community not far from where Rhonda lives.

Retired after 42 years of working at the Dorchester County Library, Rhonda has been named the women’s world champion in muskrat skinning four times. One year she and her brother, Mark Flowers, won both the men’s and women’s top trophies. Her best time? She skinned three muskrats in 1:24. But she notes that it’s not just about speed: no nicks or cuts allowed – it has to be a “sellable pelt.”

“I don’t know why people are so fascinated. This is just what we do. It’s real.”

The Outdoor Show has been a long-lasting tradition for Rhonda and her family. Her mother, Nellie Flowers, was 10 years old when she competed in muskrat skinning at one of the early Outdoor Shows in 1938. Now 88, Nellie will be there again this year to cheer on her family. Some years it seems that Rhonda’s whole family competes in one event or another at the Outdoor Show, whether muskrat skinning or duck calling or muskrat cooking. One photo Rhonda has shows half a dozen family members all showing off their various trophies.

She hopes that her 3-year-old granddaughter will follow family tradition. “She will learn to skin muskrat,” Rhonda says without hesitation. Already, little Kinsley has been encouraged to hold and play with the muskrats they bring home from the traps. Sometimes she’ll wrap one in a little blanket.

Rhonda will be at this year’s Outdoor Show, no question. She and her son are brushing up on their skinning skills now. For months, she’s been working up new and creative muskrat recipes so she can enter the annual muskrat cooking contest. One year she won first, second, and third place. While the traditional preparation involves sage and onion and “fat meat,” Rhonda prefers making a jambalaya or a chili. But she’s mum on what muskrat recipes she’s creating this year. “My mother doesn’t even know!” she says.

Actually, Rhonda will cook up anything that her husband or son bring home from hunting or trapping—deer, goose, fish, muskrat. She has one rule, though: “We eat what we kill.” For her, there’s no wasting anything. She also maintains a big garden, and each year she and her mother put up produce such as tomatoes, beans, strawberry fig jam, damson (a kind of grape) jam, and more. Her garage is filled with the Mason jars from last season’s harvest. “We kind of live off the land,” she says. “It’s healthier. We know where it all comes from.” 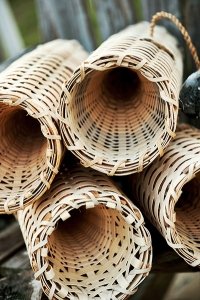 Not only does Rhonda compete at the Outdoor Show, she also has a booth where she shares memories of past Outdoor Shows—and where she demonstrates how to make eel pots. What’s an eel pot? It’s a woven, wooden basket that was traditionally used to catch eel. Today’s eel pots are usually made from mesh wire and cloth. And yes, eeling still happens here in Dorchester County; most of the snake-like fish is shipped to Asia.

The old-time eel pots are things of beauty, and weaving them is a dying art. For Rhonda, it’s become a new tradition—she only learned how to weave eel pots a couple of years ago through the Maryland Traditions Apprenticeship program. Rhonda, her mother, and her brother all learned the labor-intensive process of weaving an eel pot from Melvin Hickman of Cambridge, who in turn learned from his grandfather. They are among the only people left on the Eastern Shore who know how to do it.  Rhonda will have some of their hand-made eel pots for sale at the Outdoor Show.

“I just don’t want to see the traditions end. We’ve lost a lot of traditions because people don’t think it’s important,” she says.

Actually, helping keep these traditions going has made Rhonda something of a celebrity. She’s been featured in Muskrat Lovely, a Maryland Public Television documentary about the National Outdoor Show. She’s hosted Andrew Zimmern of the Travel Channel for a Bizarre Foods episode. She’s appeared in books and on audio CDs. She even keeps a few whole muskrats in the freezer just in case an opportunity comes up to share Dorchester’s muskrat heritage.

She’s not sure why she attracts all this attention. “I don’t know why people are so fascinated,” she says. “This is just what we do. It’s real.” And in today’s age of “reality television,” a dose of Rhonda’s version of reality is refreshing indeed.

P.S. Rhonda and her family again made a splash at the 2016 National Outdoor Show. Rhonda won the national women’s championship for muskrat skinning as well as first, second, and third place honors in various categories in the muskrat cooking contest. Her mother won a second place in the cooking contest, and her son Justin won first place in trap setting. Congrats to all!

(All photos here by Melissa Grimes-Guy.)