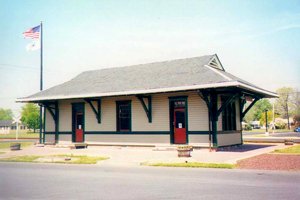 Sixty-six cents was all it took in 1801 to purchase about one acre of land upon which the first significant building in the Hurlock area was built. The Washington Chapel was constructed in a grove of trees adjacent to town limits. After the Delaware Railroad built a station in 1867, in what is now Hurlock, and John M. Hurlock built a storehouse and his residence close by, the Washington Chapel congregation in 1888 combined with two others to erect a new church within the Hurlock community – the Washington Methodist Church. But it was not until 1890, when the Baltimore, Chesapeake and Atlantic (BC&A) Railroad intersected the Delaware Railroad in Hurlock, that the town really started to grow.

Because of its excellent railroad facilities that carried passengers and products to major destinations, Hurlock became the industrial and commercial hub of the northern part of Dorchester County. It still holds that distinction, which is reflected in the town’s motto,”On track…since 1892.”

Hurlock is the home to several industries and businesses related to food and poultry products, trucking, and other manufacturing. In 1987 the fully serviced Industrial Park was established on 97 acres owned by the town. The entire Industrial Park was designated as a State Enterprise Zone in 1989, providing substantial tax incentives to new industries meeting certain qualifying criteria.

Hurlock has maintained not only the industrial and commercial significance bestowed by its railroad presence, but also the community spirit first exhibited with the construction of the Washington Chapel. Hurlock has numerous churches representing a variety of denominations. The Hurlock Free Library, which is the oldest library on the Eastern Shore of Maryland and the second oldest in the state, originated in the Hurlock home of Henry Walworth in 1900. The community honored World War I veterans with a marble statue financed through local fund-raising events.

Hurlock’s community spirit is most evident at the Hurlock Fall Festival, now held on the first Saturday on October every year. Initiated during the town’s Centennial celebration in 1992, the Fall Festival offers a full day of events – a kick-off parade, crafts, flea markets, food, family activities, and train rides.

There is also a train station that serves as the central location of the Hurlock Fall Festival. The town refurbished the station with public and private funds in a design based on the first station built in Hurlock in 1867. The town also owns two passenger cars that are used to provide train rides during the Fall Festival.

The next time you are out and about visit the Town of Hurlock, and discover one of the best-kept secrets in Maryland. You’ll enjoy the quality of life in this Eastern Shore town.