The organizers of Cambridge’s event to commemorate the 400th anniversary of the Trans-Atlantic slave trade, a historic preservation non-profit, a community organization dedicated to the memory of Harriet Tubman, and a renowned muralist were honored Thursday, Oct. 24, for their roles in helping to preserve and promote Dorchester County’s local culture during the annual Heart of Chesapeake Country Heritage Area Awards Reception.

During the event, which took place at Layton’s Chance Vineyard & Winery, Heritage Board Chairwoman Midge Ingersoll gave a presentation on the Heritage Area’s achievements over the past year. Heritage Area mini-grant recipients also were present with displays featuring their organizations and how Heritage Area funding assisted with their projects.

This is the 15th year that the Heritage Area Board has recognized and celebrated the accomplishments of its community partners with heritage awards, said Julie Gilberto-Brady, Heritage Area manager.

“We are especially fortunate here in Dorchester County to have so many people – like those honored here tonight – who lend their passion, their time and their talents to preserving and promoting our heritage and culture,” Gilberto-Brady said during the awards presentation. “All of you truly make a difference in showcasing and demonstrating what makes Dorchester County unique.”

The 2019 honorees were nominated by members of the community and chosen by the Management Board of the Heart of Chesapeake Country Heritage Area. 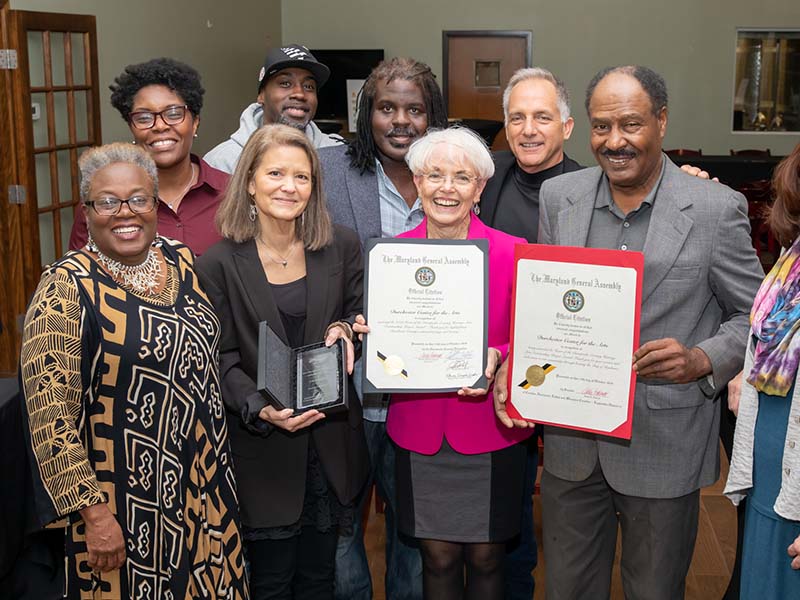 Outstanding Project: Day of Resilience – organized by Alpha Genesis Community Development Corp., the Dorchester Center for the Arts and the City of Cambridge

This award recognizes an exceptional project, event, or activity conducted/sponsored by an organization, business, individual or local government that highlights Dorchester’s natural or cultural heritage and/or increases public awareness of its history, heritage, and cultural traditions.

In selecting the Day of Resilience for this honor, the Heart of Chesapeake Country Heritage Area Board noted that the event provided recognition and reflection on the 400th anniversary of the arrival of the first Africans to be sold into bondage in North America in 1619.

From the beginning of the event at the Dorchester County Courthouse, which had been the site of slave auctions in the 1800s, through the programming throughout the day and into the closing activities during the gathering at Cannery Way, the celebration highlighted the cultural heritage of Dorchester’s African-American community and inspired a new appreciation and understanding of this heritage for the hundreds of attendees.

This award recognizes a person for his/her contributions to the heritage community by interpreting, preserving, promoting, researching and/or supporting local history and cultural traditions that result in improved public appreciation of local history and cultural heritage. Individual achievement awardees have demonstrated dedicated involvement in local heritage concerns; leadership in managing a heritage-related event, organization, facility or natural resource; and engagement in restoring, designing or crafting heritage-related works of art, architecture, the humanities or other creative expression or in saving or maintaining an important landmark.

In affirming this award, the Heritage Area Board noted that Rosato has contributed much to Dorchester County through his murals, and the award recognizes all of his public, outdoor murals that highlight Dorchester history and heritage.

This award recognizes an organization or local government entity that demonstrates sustained achievement in contributing to heritage preservation, promotion, interpretation or tourism efforts and providing sustained contributions to the community’s heritage, such as actively participating in preservation efforts, promoting resource stewardship or encouraging advocacy.

In making this selection, the Heritage Area Board noted that the NHPA continues to push forward with the restoration of the Handsell historic site outside Vienna. Projects have included the installation of period-correct windows, stabilizing the basement entrance and repairing floor joists in the historic house.

While the restoration continues, a number of cultural and heritage events and activities continue to make Handsell a jewel for Dorchester. These include Chicone Village Day, the Nanticoke River Jamboree, Saturday open houses during the summer and the NHPA plans for building additional programming opportunities for youth organizations. 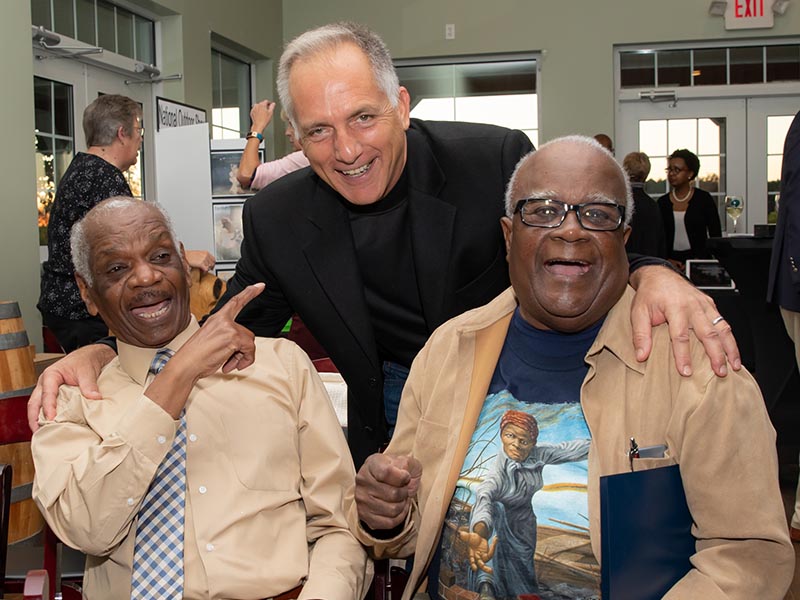 Awardees for Organizational Excellence in Education and Outreach and for Individual Achievement: Tubman Museum and Education Center and Michael Rosato. From left, Herschel Johnson, Michael Rosato and Bill Jarmon.

The nomination for the Harriet Tubman Museum noted that the organization “has been telling the story of Harriet Tubman and the Underground Railroad since the 1980s and that dedicated local volunteers with a wealth of knowledge have committed themselves to preserving this legacy and sharing it with thousands of annual visitors.”

As one of the Dorchester Center for the Arts’ partners for the recent Harriet Tubman mural project, this group has taken their dedication to the next level with the dramatically increased visitation resulting from the new mural, Take My Hand, beautifully rendered on the exterior wall of the Center by muralist Michael Rosato.