Shining a beacon – past, present, future

This month’s spotlight shines on the Cambridge Lighthouse Foundation. Their story goes back many decades, but it is one that the organization is dedicated to seeing continue well into the future. In keeping with their commitment to historic preservation, the HCCHA also has been committed to supporting their efforts.

“I think that people recognize that the lighthouse is a really important icon for our town. We talk a lot about tourism and using that to build our economy, but the lighthouse is also something people cherish in a real hometown way. It’s where high school kids come to take prom pictures and couples come to take engagement and wedding pictures. It’s where you bring out-of-town guests to show off your hometown pride.”
– Jim Duffy

Making the most of an incredible asset

The Cambridge Lighthouse Foundation came into existence after the Lighthouse was built in 2012. The construction happened under the auspices of a different nonprofit, which transferred ownership of the Lighthouse to the city and then closed its doors.

“That’s when we came along,” said Jim Duffy, executive director of the Cambridge Lighthouse Foundation. “Our role is to make sure our community makes the most of the incredible asset we now have in the Choptank River Lighthouse. That means organizing community volunteers who are dedicated to the cause. That means building the Lighthouse into a showcase for our maritime heritage.

“That means promoting and marketing the Lighthouse in ways that build visitation not just to the beacon itself, but to other businesses and attractions around the county. It means making the Lighthouse fun and fascinating for visitors. Whether they’re from Hawaii or Hurlock or Hong Kong, we want them to feel so welcome and engaged that they go back home raving about our community to family and friends. Our volunteers do a great job of that.” 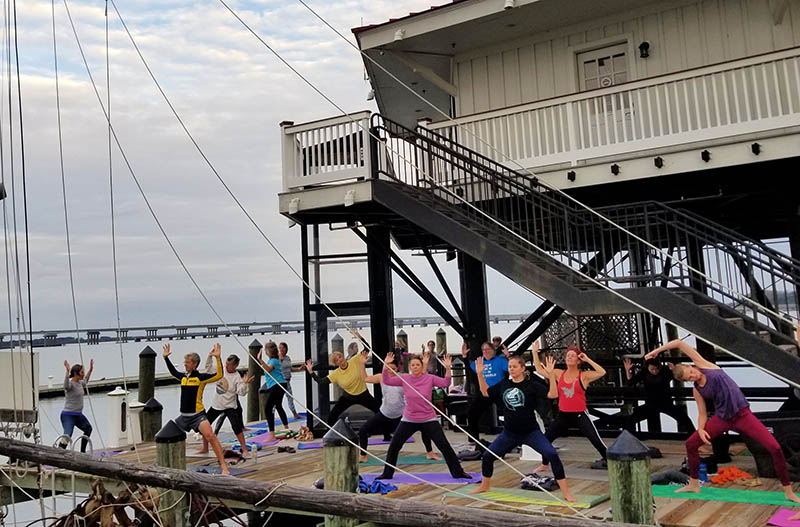 Sunset Yoga at the Lighthouse 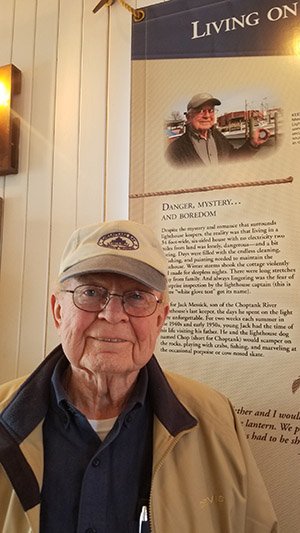 Jack Messick gave a talk about being the son of the last live-aboard lighthouse keeper.

The foundation’s mission also includes a significant preservation element.  A leadership team from the board of directors is working with the city and the group that manages the Cambridge Marina to maintain the structure so that future generations can also make the most of this incredible asset.

The organization’s vision has been constant over the years, but its activities continue to grow in significant ways. As resources and volunteer numbers increase, the foundation has gained the capacity to do new things, such as waterfront yoga classes or putting up temporary exhibits that are seen by many thousands of people.

“We’re really lucky to be doing the work we do in such a generous community,” Duffy said. “We have a volunteer board of directors, of course, and they’re uncommonly engaged and dedicated.

“The biggest group of our volunteers are the ‘lighthouse keepers.’ These folks commit to doing one shift every month at the lighthouse greeting visitors, answering questions, and generally being a goodwill ambassador for Dorchester County. It’s really a fun little job that lets you meet all kinds of interesting people from around the region and the country – and even the world.” 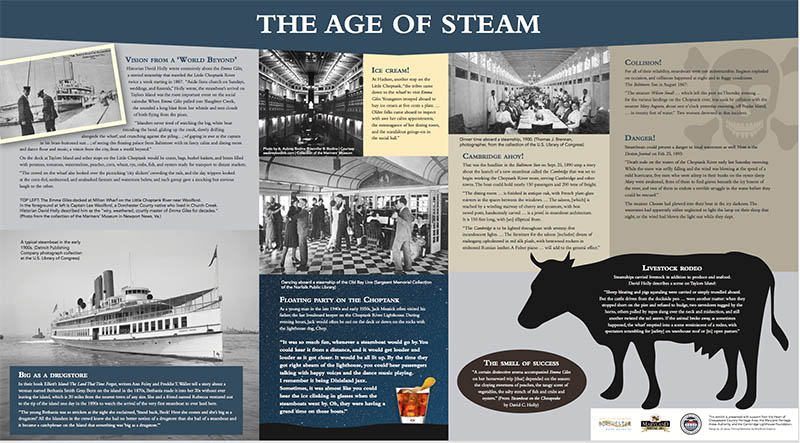 A new exhibit at the lighthouse was funded with a Heritage Area Mini-Grant.

A recent Heritage Area mini-grant in 2019 helped put the Lighthouse Foundation in position to do some fun and interesting things in concert with the traveling Smithsonian exhibit, “Water/Ways.”

The “keepers” staff the lighthouse on weekends, but the building is open for self-guided tours seven days a week.

Volunteer
The Lighthouse Foundation is recruiting volunteers. Last year’s roster was about 25 people, with lawyers, teachers, musicians, event organizers and medical professionals. They had moms who did shifts with kids, too, and the kids got some community service hours in. There are no special qualifications. They do a little training session for everyone.

Make a Gift
Once a year, the foundation reaches out and asks people to make an annual gift to support their nonprofit and the efforts of the hard-working volunteers.

Come to the Party
Every year, there is a big fundraising party and auction called “Light Night.” That’s another area where volunteers are engaged – in planning and executing the event.