Pictured above: A 2017 celebratory event at Bethel Church, which received Heritage Area Mini-Grant funding for a renovation project spearheaded by ESNC.

This month’s spotlight shines on the Eastern Shore Network for Change, which endeavors to raise awareness of issues in Dorchester County and creatively work with the community to inform, educate and foster change that leads to social and economic empowerment. 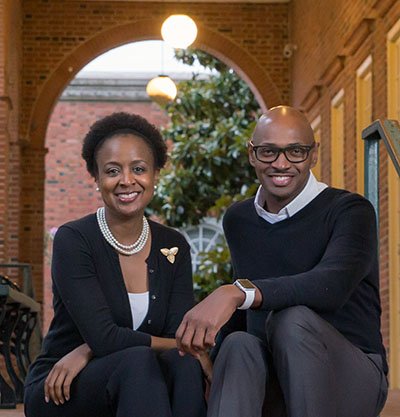 Founded in 2012 by Dion D. Banks and Kisha Petticolas, the Eastern Shore Network for Change (ESNC) has continued to uphold its vision to be an allied resource for existing community-based programs, local government, social service institutions, public schools, higher learning institutions, the department of corrections and the local courts.

Its efforts began when Kisha and Dion were working on the successful election campaign for Cambridge Mayor Victoria Jackson’s second term in 2012. In the months leading up to Election Day, they met with constituents all across the city and received a lot of honest feedback about what the voters wanted from their mayor and city council. Education, jobs, housing and infrastructure were common concerns for all. However, their responses about race relations “were all over the board,” Dion said.

“To better understand the community’s perception of race relations in Cambridge, we decided to have a town hall meeting,” Dion said. “To our surprise, over 200 people showed up at historic Bethel African American Episcopal Church.  After more than two hours of dialogue, we realized our community had never had a public conversation about the civil unrest that happened in Cambridge, Maryland. We also realized we had to reclaim our own narrative to make sure we were telling our own story. We wanted to let the world know that our story is one of community, faith, hope and change.”

Since then, they have narrowed their focus to three categories: education, representation and revitalization. With three board members – Dion, Kisha and Verlisha Taylor – ESNC has developed strategic partnerships with numerous community businesses and volunteers.

“We are advocates for education and try to bridge any gap or challenges children or adults may have while trying to pursue an education,” Dion said. “When it comes to representation, we try to make sure our entire city is represented and has a seat at the table by actively participating in local government and serving on community organizational boards.”

Those endeavors also have lead them into collaborations and projects that support the mission of the Heart of Chesapeake Country Heritage Area, which is defined by nine themes, including “Harriet Tubman and the Eastern Shore African-American History.” As part of its mission, the heritage area “leverages public and private partnerships to assist individuals, organizations and government entities protect, preserve and promote Dorchester County’s unique historic, cultural and natural resources.”

ESNC’s dedication to ideals reflecting the heritage area’s mission has been demonstrated in a variety of programs and activities. In 2017, ESNC spearheaded the declaration of Gloria Richardson Day by the Maryland governor, and in 2017, ESNC organized Reflections on Pine, which featured four days of events commemorating the civil unrest in Cambridge Maryland during the summer of 1967 and celebrating African American history.

“I think one of our most important accomplishments was creating an environment where it was okay to talk about our past,” Dion said. “We identified processes and safe spaces for people to express how they feel. I also think it created a sense of pride in our community as we took a taboo topic and turned it into a story of hope and change.

“The other was having Gloria Richardson Day declared by the Governor’s Office. The movement in Cambridge was very different than any other in our nation. What happened here impacted national politics. Feb. 11 is a day that our state and nation can reflect upon and learn about our community, our heroes and hopefully visit Cambridge.”

Heritage Area mini-grants have assisted ESNC with its goals in several ways. A $4,108 Heritage Area mini-grant that was awarded in January 2019 helped ESNC pay for an assessment for the first phase of a restoration project at Bethel AME Church – the same church where ESNC held its first town hall meeting several years ago.

ESNC was able to leverage that heritage-area funded work to secure a grant award of $100,000.00 from the 2020 African-American Heritage Preservation Program. That will enable them to continue their restoration of Bethel African Methodist Episcopal Church.

In addition, ESNC is working with the Harriet Tubman Museum and Education Organization building a new website, a project that also received mini-grant funding from the heritage area. The project will help the Harriet Tubman Organization develop a digital presence to represent its mission, programs and activities. With another avenue to showcase Harriet Tubman’s life and legacy, the project aligns with two of the Heritage Area’s Strategic Plan goals to enhance visitor resources and raise visibility.

ESNC’s first event: town hall meeting, “45 Years After the Fire: How do you know where you’re going if you don’t know where you’ve been? An Honest Conversation About Race”

Declaration of Gloria Richardson Day (Feb. 11) by the governor in the state of Maryland

Reflections on Pine, 10 events over four days celebrating history and “reclaiming our narrative”

Started an “Expungement Camp” to help locals expunge their records

Traveled to Ethiopia at the invitation of The United States Embassy.  Mayor Victoria Jackson-Stanley joined them.

Launched their first ever book club “The Year of Reading”