This month’s spotlight shines on the Nanticoke Historic Preservation Alliance, proud stewards of one of Dorchester County’s most interesting and intriguing historic structures, an old ivy-covered brick building located in the middle of what is known as “the Indiantown.” Through meticulous research, the story of Native people, licensed Indian traders, English settlers, British attacks, merchant activity and structural devastation tied to the site is slowly emerging.

Organized in 2005 to restore the historic brick Handsell house and delve deeper into the stories of three cultures associated with the site, the Nanticoke Historic Preservation Alliance (NHPA) has developed its outreach to encompass so much more.

The mission has remained the same, but the NHPA has expanded its activities into living history events, school programs and overnight enrichment experiences to help tell the stories of the three cultures who once lived on that land: Native Americans, African-Americans and English settlers.

Moreover, the site is being developed to be a major heritage tourism site in Dorchester County with a Guide-by-Cell audio tour, Nature Trail, Chicone Village re-creation, picnic tables and dog/family friendly environment. 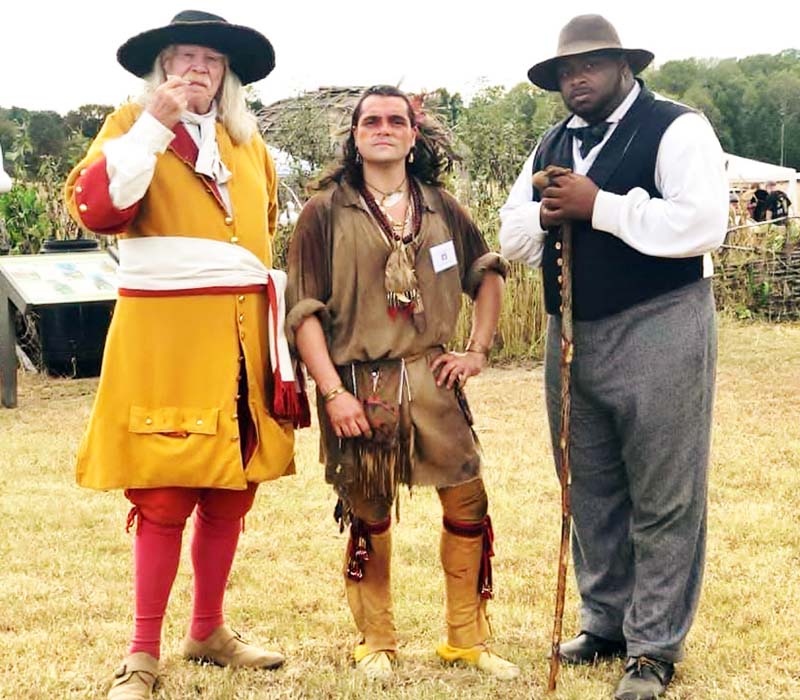 Above: The NHPA showcases the stories of the three cultures who once lived on the land that is now known as the Handsell Plantation.

Handsell, which is located outside of Vienna, is listed on the National Register of Historic Places and the National Park Services’ Historic American Buildings Survey. The property was an early Nanticoke Native village, later named for a 1665 land grant to Thomas Taylor, native interpreter and Indian trader for the Maryland Colony.

Designated an Indian Reservation in 1720, the land reverted to Henry Steele (Englishman turned American patriot, Dorchester state delegate) who built a “large, pretentious” brick house sometime after 1770. The existing house is what remains of this large dwelling house.

In 1781, British privateers raided and burned plantations along the Nanticoke River. The Handsell house standing today also exhibits signs of a fire and a partial collapse. Today, it retains a brick façade that dates from the 18th century, but roof, chimney tops and interior woodwork that date from 1837, indicating it was rebuilt to a smaller scale using the ruins of the earlier dwelling.

Using the Guidelines of the Secretary of the Interiors Standards, the NHPA has adopted their method of preservation for Handsell. As such, Handsell can uniquely be used to interpret the history of Dorchester County in a setting that is visually authentic and untouched by modern materials.

The area around Handsell is protected by conservation easements, allowing it to retain its rural setting. This is rare in the world of historic preservation and heritage tourism. Handsell visitors are given an experience that is different from those provided by sites that have been polished and restored to a more modern sensibility and are surrounded by modern development and parking lots.

Handsell’s diverse programs have contributed to the site’s stature as one of Dorchester County’s important historic landmarks. But the three accomplishments that NHPA counts as their most significant achievements are the preservation of brick house, listing on the National Register of Historic Places and the building of the Chicone Village.

Midge Ingersoll, who also serves as President of the Heritage Board of Directors, notes NHPA’s close ties to the Heritage Area. Past experience has demonstrated that since 2009, most visitors are returning each year to see the progress on the preservation efforts at Handsell. As a result, heritage tourism increases as visitors make use of hotel accommodations, restaurants and other heritage area sites when they come to the county for Handsell living history events.

NHPA has a proven record of stewardship of Handsell. Acquiring the property in 2009, they have received a Heart of Chesapeake County’s Heritage Area Award three times and have been awarded the Maryland House and Garden Pilgrimage Special Recognition Award for the work at Handsell. To date, more than $350,000 has been raised and spent on the preservation efforts and development of the site at Handsell.

“All these goals will lead us into the right decisions to make Handsell one of Dorchester County’s prime heritage tourism sites, promoting history while encouraging economic development through tourism.”

Numerous grants from the Maryland Heritage Areas Authority and mini-grants from the Heart of Chesapeake Country Heritage Area have contributed to the successes that NHPA has had in advancing its goals. Mini-grants have funded various projects, including a Guide by Cell tour, wayside exhibits and furnishings for African American interpretation in the kitchen. MHAA grants have supported Handsell Kitchen entrance and beam repair, brick exterior repairs, stone pull-off and wayside exhibits.

“The stone pull off provides a safe location for visitors to stop at the site, and the four wayside exhibits there attract them to do so,” Ingersoll said. “The major work in the kitchen was structurally necessary to continue with all other restoration work that has followed. We now have a safe entry to the basement kitchen where African American story is interpreted.”
– Midge Ingersoll, NHPA President

NHPA has about 150 members, but its programs and events draw hundreds more to their site each year. Their preeminent events include Chicone Village Day; Nanticoke River Jamboree, with living history showcasing all three cultures; an annual meeting with renowned speakers, such as Vince Leggett, founder of the Blacks of the Chesapeake Foundation; fundraising soirees held at a different historic residence each year, such as Garden of Eden and Albanus Phillips House; and the Maryland House and Garden Pilgrimage in Dorchester County.

Although all events had to be cancelled in 2020 because of the Covid-19 Pandemic, NHPA is working on a schedule of activities for 2021. They have set Oct. 9, 2021, as the date for the Nanticoke River Jamboree, with a Revolutionary War them focused on the attack on Vienna in 1781.

Summer Saturdays will be held at Handsell from 11am-3pm every Saturday from mid-June through Labor Day weekend. They’d appreciate an email to let them know you are planning on visiting: restorehandsell@gmail.com.

Grounds are open to the public 7 days a week during daylight hours with Wayside Exhibits, Longhouse Living History Exhibit and Exterior Viewing of the Handsell House, self-guided tours with the Guide-by-Cell app directions at the site. Special group tours by appointment: contact restorehandsell@gmail.com.