“We are especially fortunate here in Dorchester County to have so many people and organizations that lend their passion, their time and their talents to preserving and promoting our heritage and culture,” said Holly Gilpin, Dorchester County Tourism Director. “All of them have truly make a difference in showcasing and demonstrating what makes Dorchester County unique.”

This is the 18th year that the Heritage Area Board has recognized and celebrated the accomplishments of its community partners with heritage awards. The 2022 honorees, who were selected by the Management Board of the Heart of Chesapeake Country Heritage Area, are:

Mayor Cline, who passed away on July 8, was one of the founding members of the Heart of Chesapeake Country Heritage Area Management Board and was a dedicated advocate for protecting and preserving Dorchester County’s rich history and heritage. The award was presented posthumously at a Nov. 12 event in Mayor Cline’s honor at the Dorchester Center for the Arts.

“The link with the past is tremendously important to me,” Mayor Cline said in an interview a few years ago. “Our informal motto here in East New Market is ‘Rooted in the Past, Looking toward the Future.’ I have been involved with the heritage board from its very beginning, before it was even officially recognized by the county in 2002. I think the Heritage Area is the cornerstone of preserving the best elements of the past, which will serve us well in the future.”

Her work has carried over into many other community service activities, including the Dorchester Center for the Arts, the Dorchester County Library and the Eastern Shore Land Conservancy. To further recognize her dedication to preserving and promoting East New Market’s and Dorchester County’s unique heritage, the Heritage Board has decided to name the Volunteer of the Year Award in Mayor Cline’s honor. 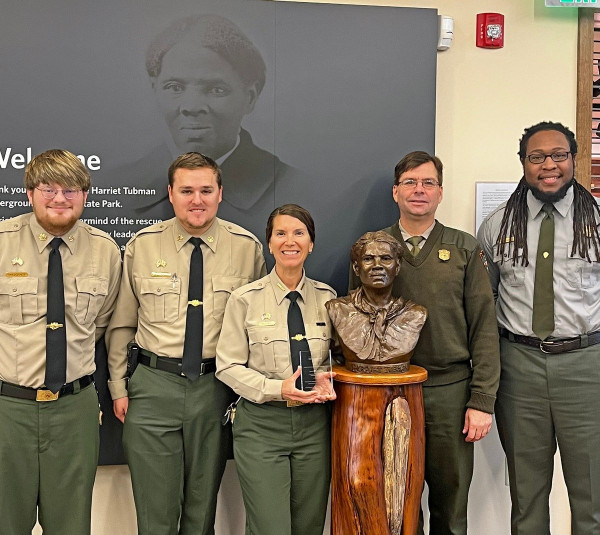 This award recognizes an exceptional project, event, or activity conducted/sponsored by an organization, business, individual or local government that highlights Dorchester’s natural or cultural heritage and/or increases public awareness of its history, heritage, and cultural traditions.

To commemorate the bicentennial of Harriet Tubman’s birth, the Harriet Tubman Underground Railroad Visitor Center and State Park in Church Creek, coordinated a year-long program of events and activities throughout 2022.

These included a weekend celebration in March (the month Tubman was born); Birds of Tubman Country programs; walking tours through downtown Cambridge, which focused on the stories of the Underground Railroad and the people associated with Harriet Tubman’s life; screenings of Maryland Public Television’s extended trailer for Harriet Tubman: Visions of Freedom; lectures on vital roles played by Black Jacks and iron furnaces on the Underground Railroad, Harriet Tubman’s time in the Union Army and the important roles women played in the Civil War, as well as other topics; and a guided tour through the Visitor Center’s Legacy Garden, as well as the adjoining Blackwater National Wildlife Refuge, to show how Tubman’s landscape played a crucial role in the quest for freedom.

The award was presented December 7 at the Harriet Tubman Underground Railroad and State Park. 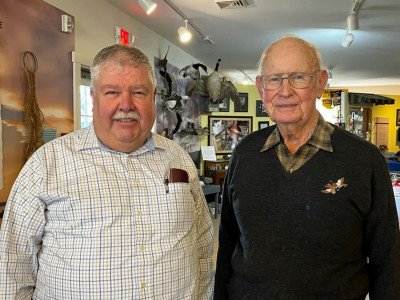 The South Dorchester Folk Museum sponsors a monthly lecture series on a wide variety of historical aspects related to Dorchester County. These well-researched and engaging programs have included “The Education of Harriet Tubman: How She ‘Came up’ in South Dorchester” with local historian and author Phillip Hesser; “God’s Wild Garden: Early Methodism and the Delmarva Peninsula” with the Rev. Joseph DiPaulo; historic relationships of the Christ Rock, Smithville and Lane Churches on the Taylors Island Charge with Renna McKinney, president of the Harrisville/Malone Cemetery Maintenance Fund; “American’s First Line of Defense” with Major General James Adkins, USA, retired; and “Call Me Cousin George,” with George Radcliff, who shared highlights and stories from the life of his grandfather, Senator George L. Radcliffe, a Dorchester native.

The award was announced on Dec. 11 and will be formally presented to the Folk Museum in January.