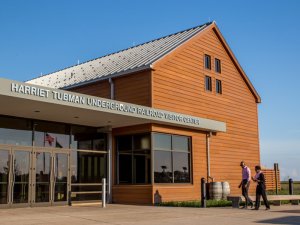 About a 20-minute drive from Cambridge, the new Harriet Tubman Underground Railroad Visitor Center is located amid the landscapes where Tubman lived and toiled. The unspoiled scenes in the area look much as they would have in Tubman’s time. The Tubman Visitor Center features 10,000 square feet of engaging, enlightening multimedia exhibits about her life. It’s a great stop itself and a great launching point for exploring the Harriet Tubman Underground Railroad Byway, a scenic, self-guided driving tour that includes 36 sites related to Tubman and the Underground Railroad on Maryland’s Eastern Shore, with more sites in Delaware leading to Philadelphia.

The 10,000 square foot visitor center includes exhibits as well as a theater that tell the stories of Harriet Tubman’s life and work. It also includes a classroom, museum store, and library. The state park’s 17 acres include a meditation garden, nature trails and an outdoor pavilion available by rental.

Exhibits feature information about Harriet’s childhood and young adulthood, living and laboring under slavery here in Dorchester County and neighboring Caroline County. The center immerses visitors in the secret networks of the Underground Railroad and Harriet’s own daring rescue missions. Exhibits also feature Harriet’s actions during the Civil War, and her later years as a suffragist, civil rights worker and humanitarian. The landscapes in the vicinity of the park have changed little since Harriet’s childhood, when she lived, worked and traveled similar environs.

To request a tour for a group, complete the tour request form.

From Annapolis and points north:
Take US-301 North/US-50 East towards the Town of Cambridge. Turn right on Route 16. Turn left onto Route 335 (Golden Hill Road), drive for 4.5 miles and the Visitor Center will be on your right.

From Ocean City and points south:
Take US-50 West towards the Town of Cambridge. Turn left on Route 16 (Church Creek Road). Turn left onto Route 335 (Golden Hill Road), and drive approximately 4.5 miles and the Visitor Center will be on your right.