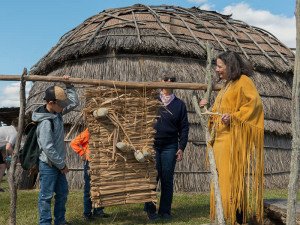 The Nanticoke Historic Preservation Alliance (NHPA) is in the process of conserving the historic plantation house known as Handsell, located north of Vienna, Maryland on Indiantown Road. The Handsell house is built on the site of the Chicone n=Native American village.

To honor the Eastern Woodland Native People of Delmarva, the NHPA built an authentic replica of a single family homestead using the materials and techniques available to prehistoric people circa pre-1600.  A waddle-fenced garden  is planted each summer with plants appropriate to a garden of the native people. The Chicone Village at Handsell may be visited at any time during daylight hours year round.

The Handsell site can be viewed at any time during daylight hours, where six wayside exhibits tell the story of the house and the African American and native people who once lived here.

Also, don’t miss Handsell’s free audio guide. Call 410-858-4173 to access the audio tour. You may also dial this number from your cell phone from anywhere to learn more about Handsell.

In 1665, Thomas Taylor was granted 700 acres of land called “Handsell” along the Nanticoke River, which he established as a trading post with the natives of the Chicone Village.

In 1704 this land was made part of an Indian reservation by an act of the Maryland Assembly. In 1768 the reservation was dissolved and returned to the family of Colonel John Rider which included Henry Steele and his wife Ann Billings. The original brick plantation house at Handsell was built sometime in the last quarter of the 18th century.

At some point, a major fire at Handsell gutted much of the interior and caused collapse of the second story. In 1837 the house was rebuilt from the earlier ruins by John Shehee.

The existing woodwork at Handsell dates from the 1837 rebuild. This brick dwelling house exhibits a unique façade with a protruding pavilion and Flemish bond brickwork, indicating the builder’s knowledge of contemporary design trends. Currently listed on the National Register of Historic Places. The NHPA’s intention is to fully restore Handsell as an educational centerpiece for historic and environmental study of the entire Nanticoke River area and provide a meeting place for all groups with similar missions. The Handsell site may be viewed anytime during daylight hours, where four newly installed Wayside Exhibits inform visitors of the story of the house, the African American and the Native people who once lived there. During the restoration phase, the Handsell intertior is opened for special events only or by special tours given by the Board of Trustees of the NHPA.

Donors to the “Handsell Restoration Fund” can arrange a tour at anytime by contacting us at restorehandsell@gmail.com.

For the latest news and events, go to restorehandsell.org

Groups by appointment, and open for special events twice a year until restoration is complete. Wayside Exhibits and Longhouse Exhibit are accessible every day during daylight hours.