There were threats that my house would be bombed, and I later found out that I was No. 2 on the Klan’s list after Martin Luther King. – Gloria Richardson

One of the most influential leaders of the Civil Rights movement, Gloria Richardson was a towering figure in American history.

Richardson was the first woman in the country to lead a grassroots civil rights organization outside the Deep South. She helped found – and lead – the Cambridge Nonviolent Action Committee (CNAC) during a period of civil unrest 50+ years ago caused by racism and lingering segregationist practices.

Her story began in Baltimore during the Depression. Born to John and Mabel Hayes in 1922, Gloria and her family moved to Cambridge Maryland when she was six. Her mother’s family – the St. Clair’s – were prominent and politically active. Gloria’s grandfather – Herbert St. Clair – owned real estate, operated numerous businesses, and was the sole African-American member of the City Council. 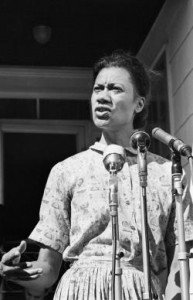 Gloria left Cambridge at 16 to attend Howard University. She graduated in 1942 with a B.A. in Sociology and worked for the federal government during World War II. When the war ended, she returned to Cambridge. Despite Gloria’s degree and connections, she couldn’t land a job as no agencies would hire a black social worker. Gloria married Harry Richardson, a local school teacher, and was a homemaker for 13 years while raising their children.

Her formal foray into the civil rights movement grew from her daughter Donna’s participation in protests against segregation and racial inequality in Cambridge. Gloria helped form – and was selected to lead – the Cambridge Nonviolent Action Committee. She was a leader of the Cambridge Movement, a civil rights campaign in her hometown.

Gloria advocated for economic justice; demanding not only desegregation, but also good jobs, housing, schools, and health care. She was an early advocate for the use of violence in self-defense when necessary. In a seminal photo, Gloria is seen pushing away a national guardsman’s rifle after Maryland Governor Millard Tawes enacted martial law.

In July 1963 – while her city was still under the Guard’s police presence – she met with U.S. Attorney General Robert Kennedy to negotiate the Treaty of Cambridge, an agreement covering desegregation, housing and employment issues. The following month, Gloria took to the stage at the pivotal March on Washington, one of six “Negro Women Fighters for Freedom” on the program. Unfortunately, the male organizers did not allow she or her five female freedom fighters, a turn at the microphone.

Gloria resigned the CNAC in the summer of 1964. Divorced from her first husband, she married photographer Frank Dandridge and moved to New York where she worked for the City’s Department of Aging and National Council for Negro Women.

Gloria spoke truth to power for many years. A New York resident for more than 50 years, she continued to inspire people around the world – and in her hometown – until her death in July 2021 at age 99. In 2022 she was inducted into the Maryland Women’s Hall of Fame.

In 2017, the state of Maryland honored her legacy by dedicating February 11 as “Gloria Richardson Day.” Due to an ice-storm in New York, she was not able to travel as planned to Cambridge’s historic Bethel AME to be recognized in person. Thanks to modern technology, she spoke to the packed church in a live remote broadcast from her apartment. 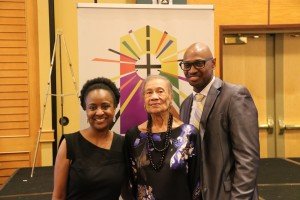 Cambridge welcomed Gloria home five months later as the honored guest for “Reflections on Pine.” The four-day commemoration of civil rights, community and change was organized by the Eastern Shore Network for Change (ESNC) to mark the 50th anniversary of the ‘long, hot summer.’

A ‘fireside chat’ facilitated by ESNC co-founder Kisha Petticolas at the Hyatt Regency Chesapeake Bay Resort in Cambridge drew hundreds of guests eager to hear the civil rights icon’s stories. The following evening, Gloria was the featured guest at the Reflection’s banquet, where her remarks brought 300 guests to their feet in a sustained standing ovation. 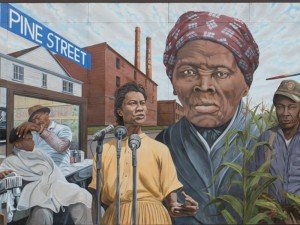 Today, visitors to Cambridge are greeted by an image of Gloria boldly demanding justice. One of dozens of African-Americans featured on a 50’x20’ mural, she is prominently placed left of center next to Dorchester native and Underground Railroad conductor Harriet Tubman.

To learn more about the life and legacy of this American hero, check out the biography released in November 2018. Published by the University Press of Kentucky, Joseph R. Fitzgerald’s The Struggle Is Eternal: Gloria Richardson and Black Liberation, “explores the largely forgotten but deeply significant life of this central figure and her determination to improve the lives of black people.”

Those were certainly troubled times, but the unity that came out of that was magnificent. People were ready and willing to fight City Hall. – Gloria Richardson