The S.S. John W. Brown, one of only two remaining and operational World War II liberty ships, will dock at the port of Cambridge, Maryland, near Governor’s Hall from August 4-12. The ship will arrive with a few hundred visitors from its day cruise, originating in Baltimore, and will remain open to the public the rest of the week from 10am until 4pm.

The ship is expected to arrive in Cambridge waters around 5:30pm on Aug. 4. The City of Cambridge suggests watching the arrival from Long Wharf Park (near High and Water Streets in Cambridge). The ship needs to disembark passengers at the new wharf next to Governor’s Hall at Sailwinds Park, so Long Wharf Park should offer a good vantage point to watch the arrival and docking.

Public tours begin August 5 at 10am, when the crew will showcase the 76-year old, 140-ton triple expansion steam engine that powers the ship. Throughout the week, tours will also feature a museum space, crew quarters, the Bridge, mess rooms, troop berthing and much more. Children 12 and under are free, and a suggested donation of $10 is asked for adults.

The tour schedule for the entire week is as follows:

The ship is more than 441 feet long and weighs more than 7,100 tons. It was originally launched in 1942. Despite her grey paint and many guns, she is not a warship but rather a merchant ship. A Liberty ship can carry almost 9,000 tons of cargo, about the same as 300 railroad boxcars. Liberty ships carried every conceivable cargo during the war – from beans to bullets.

During the evening, the Calhoon Marine Engineers’ Beneficial Association (MEBA) Training School, will host re-certification classes for marine engineers from across the East Coast.

Its visit will coincide with the 39th Annual Seafood Feast-I-Val, which will be held at Governor’s Hall on August 11 from 1-6pm.

For more information about the S.S. John W. Brown or its day cruises, visit www.ssjohnwbrown.org. 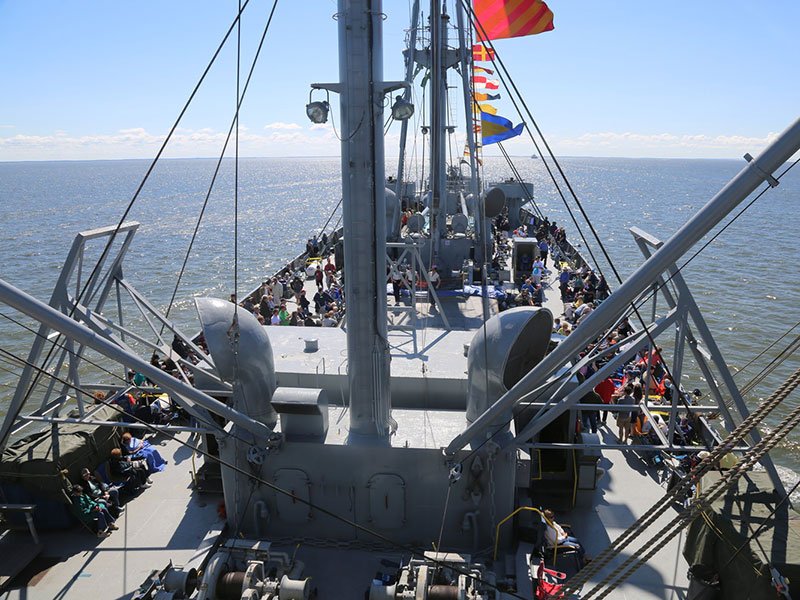