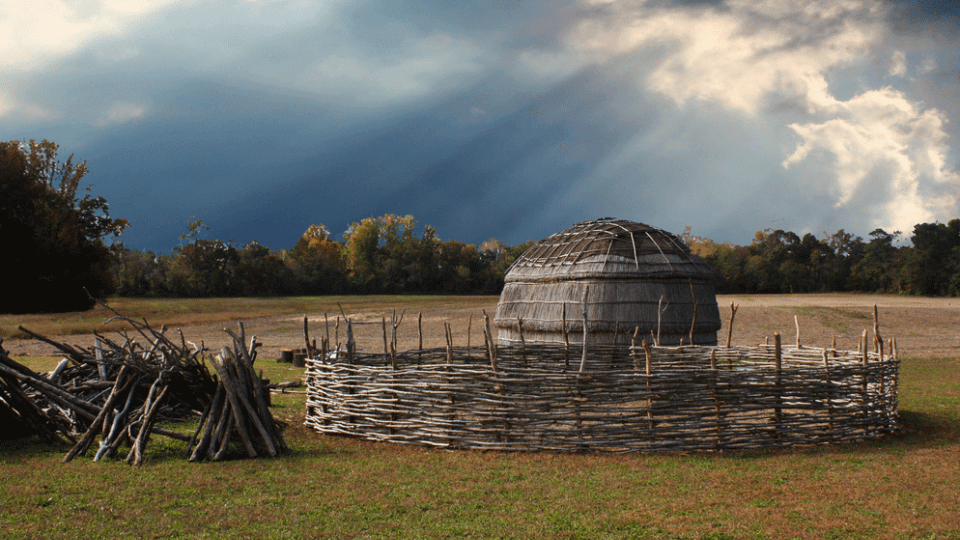 The Nanticoke Historic Preservation Alliance (NHPA) is sponsoring the 8th Annual Chicone Village Day at Handsell from 10am to 5pm on Saturday, April 30, 2022 at the historic site at 4837 Indiantown Road in Vienna, Dorchester County, Maryland. All are welcome to come to Handsell on this special day designed to honor the history and culture of the Eastern Woodland Native People who inhabited a wide area in the eastern part of the United States including the vastly wooded area of the Delmarva Pennisula.

The historic Handsell site includes a replica longhouse, work shelter and garden to celebrate the Native culture that once existed on this Chicone Village site. The Chicone Longhouse is an authentically built replica of a single family dwelling unit, made of natural materials – the first to be built on the Eastern Shore in 200 years.

The event is growing with participation from Native groups increasing yearly. Returning for his only presentation in Dorchester County in 2022 is Daniel Firehawk Abbott, retired Coordinator of Native Interpretation at Colonial Williamsburg and former Trustee with the NHPA. The Pocomoke Indian Nation, a long-time supporter of the Chicone Village will feature Chief Norris Howard and his family in the work shelter. Other tribal groups invited to attend will include: Nause Waiwash Band of Indians, Philip Goldsborough and the Lenape of Delaware and New Jersey. A special exhibit in the Handsell house, curated by Terry Crannell, will feature Native pottery sherds and other unusual artifacts.

Unlike other Pow-Wows held by Eastern Shore tribal groups, NHPA has devoted its education programs to early Native life as it was before the arrival of Europeans. Living history demonstrations will include cooking, weaving, chipping of implements and gardening with historic plants. There will be artifact displays by archaeologist Ed Otter, PhD who has done excavations at Handsell. Jeff Kirwin of the Nause-Wasiwash Band
of Indians will lead a Native drum demonstration at 12 noon and again at 2pm.

At 11am LaSara Kinser, art teacher at Cambridge Middle School, will lead a “walk and talk” on foraging for herbs and other useful plants at the Handsell site. Handsell House will be open for docent tours, including the basement Kitchen where visitors can watch native inspired food prepared from the “Handsell Native Cookbook” and where the African American story is represented. Admission is $5 (children 12 and under free) to help defray costs and for maintenance of the Village structures. Open to the public.