Waterfowl love Dorchester County! This stands to reason since the Chesapeake is located in the Atlantic Flyway, a kind of a north-south super highway for migrating birds. Among the thousands of avian species who spend time here, the most abundant are Canada geese, swans, and more than 20 different kinds of ducks.

From the air, they are enticed by the expansive marshes and sparse population to take the exit ramp to Dorchester and a break from their flights. Some stay for a few days – eat, rest, and continue on their journeys. Others remain for months and enjoy the hospitality of Blackwater National Wildlife Refuge before returning to their northern nesting places. 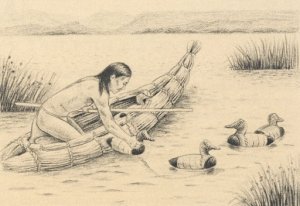 Native Americans were keenly aware of this seasonal abundance and took advantage of the bounty. To lure the birds close enough to be hunted, they made decoys from reeds and cattails, duck skin and feathers. Their ancestors had used them for thousands of years, and the ancient technique remains remarkably successful today.

Over the centuries, new materials and mass production allowed hunters to purchase rather than make their own birds. This freed up their time to experiment with posing, carving and painting techniques. The  20th century saw an explosion in exquisitely artistic waterfowl decoys, as a craft of necessity was elevated to an art form. Master carvers emerged across the country, but nowhere more so than around the Chesapeake.

Ron Rue was just one of several Dorchester carvers who distinguished himself. He studied under the tutelage of famed carver, Steve Ward of Crisfield, Maryland. (Steve and his brother Lem made some of the finest decoys in the world, and they sell today for tens of thousands of dollars. The Ward Museum is named in their honor.) Steve recognized Ron’s talent and worked with him weekly as he matured into his craft.

Certain that if he had to carve, he would not enjoy it, Rue refused to turn his passion into his livelihood.

Over the years Ron studied the methods of many regional carvers and experimented with his techniques, tools, materials, and paints. His style became more refined, but his depictions of game birds remained consistent. He won many competitions and awards, and in 2004 he was recognized as a Master Carver by Maryland Traditions. 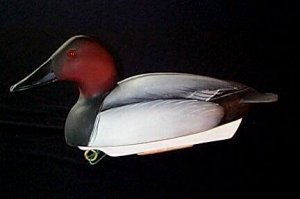 Certain that if he had to carve, he would not enjoy it, Rue refused to turn his passion into his livelihood. But just as he had been encouraged by a master, he willingly helped others, by teaching carving classes for more than 30 years and by being willing to offer guidance. Rue died in 2005, but his legacy lives on. His workshop, in all its wondrous, artistic clutter, was moved and installed at the Dorchester County Historical Society. There you can see Rue’s decoys those of others by Chesapeake carvers.