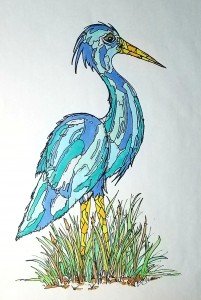 In Spring 2018, RAR Brewing collaborated with the Hyatt Regency Chesapeake Bay to create ‘Off the Rook,’ a custom beer worthy of the five-star resort. Sold exclusively at the Hyatt’s five restaurants, Off the Rook is a full-flavored American Pale Ale (5.8% ABV) with citrus and tropical forward flavor.

RAR worked with the Hyatt’s team to create a beer that would complement their local menu. The label design and name celebrate the Blue Heron Rookery, the Hyatt’s 18-acre wildlife refuge.

According to General Manager Joel Bunde, “The team at RAR took the time to get to know what was important to us, from flavors to naming the beer and tying the label design to our very own wildlife refuge, Blue Heron Rookery.”

Six-packs of Off the Rook are available at the Hyatt’s market.

RAR’s first retail collaboration was with Suicide Bridge Restaurant in 2015.  “Suicide Bridge Ale,” a blonde beer (5.0 ABV), remains one of the seafood restaurant’s most popular brews.