The CCSB, which already was partially designated as a National Scenic Byway for its cultural quality, sought the prestigious All-American Road designation in its entirety for its internationally significant cultural and recreational experiences that draw visitors from around the country and around the world. Two of the 16 sites highlighted on the 400-mile Byway are in Dorchester County – Long Wharf in Cambridge and the Blackwater National Wildlife Refuge.

Created in 1991, the program is a collaborative effort to help recognize, preserve and enhance selected roads throughout the United States. The U.S. Department of Transportation (USDOT) recognizes certain roads based on one or more archeological, cultural, historic, natural, recreational and scenic qualities. For federal designation, a National Scenic Byway is required to have at least one intrinsic quality that is nationally or regionally significant. An All-American Road like the CCSB is required to have at least two significant intrinsic qualities. 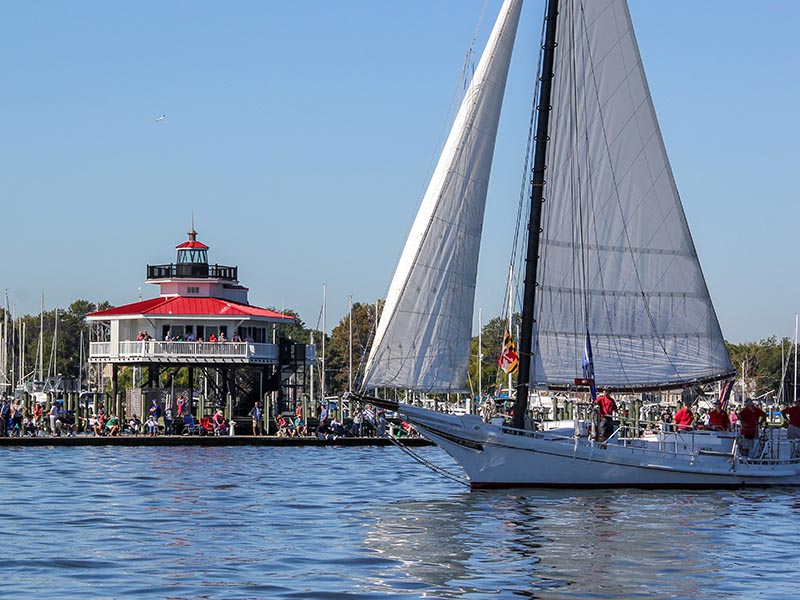 The CCSB, , which runs from Chesapeake City to Crisfield, offers up an epic journey where the lifestyles and livelihoods of generations of Watermen, shipbuilders and farmers have been shaped by an unspoiled landscape that, even to this day, makes it easy for visitors to imagine earlier times when goods were shipped to “faraway Baltimore in wooden barrels lashed aboard schooners.” The byway is a “destination unto itself” because it is the best way to travel through the extraordinary landscapes and waterscapes of the Eastern Shore of the Chesapeake Bay.

The CCSB’s national significance is readily evident through its culture and recreational experiences, according to the Chesapeake Country Scenic Byway Alliance, the coalition that led the nomination for All-American Road status. The National Park Service’s Chesapeake Bay Special Resource Study (NPS SRS) describes the cultural context of the CCSB landscape as, “The Chesapeake Bay is nationally significant in part because it possesses exceptional value or quality in illustrating or interpreting the themes of our nation’s natural and cultural heritage. The Bay provides an exceptional opportunity for interpreting the interdependence of cultural and natural resources, both in its modern condition and its nearly 300-year history.”

The NPS SRS also states that “The Chesapeake Bay is nationally significant in part because it offers superlative opportunities for recreation … The Bay’s open waters, tidal rivers, and shorelines, as well as dozens of parks and refuges and a rapidly developing system of land and water trails, provide excellent opportunities for public use, enjoyment, education and scientific study.” From birdwatching on the Atlantic Flyway, sailing, fishing, hiking and pedaling land-trails, paddling water-trails, the CCSB is an outdoor adventurer’s dream. “ 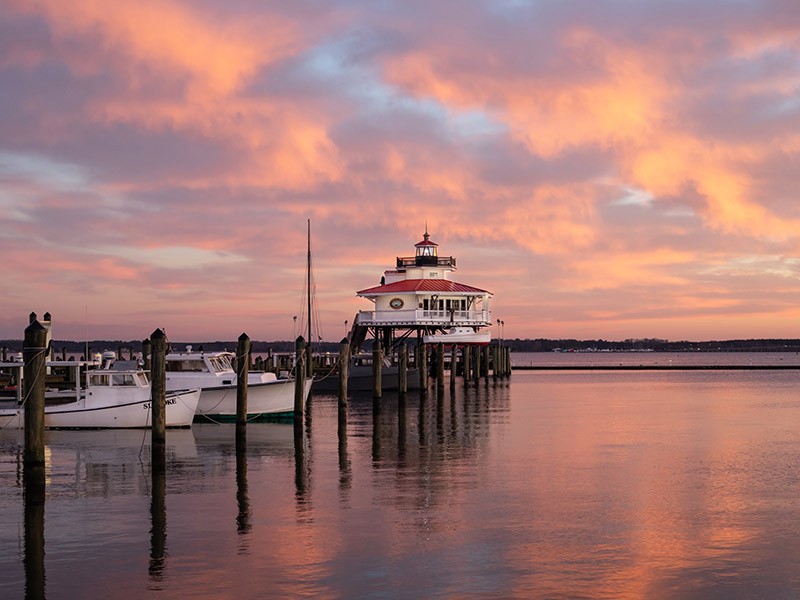 Chesapeake maritime culture is still evident today at Long Wharf (pictured above), a working waterfront where Watermen and Waterwomen embark to dredge for oysters and catch crabs in much the same manner as their predecessors. In the 18th century, when people, goods and information traveled by water, Cambridge was an important maritime port, shipbuilding center and a regional center for the slave trade, supplying workers to local agricultural communities. Ships from Africa and the West Indies brought kidnapped Africans and sold them along the Choptank River waterfront until the trans-Atlantic slave trade was outlawed in 1808.

Long Wharf once included a 600-foot-long piling-and-plank steamboat wharf. It was here that cargoes of timber, tobacco and farm harvests were hoisted by dockworkers to waiting ships – and information was exchanged to assist those involved with the Underground Railroad. In the mid-1800s, Harriet Tubman’s niece Kessiah Jolley Bowley and her family escaped from Long Wharf via boat headed across the Chesapeake for Baltimore where they met her and ventured north.

Cambridge Creek, adjoining the Choptank River here, played a pivotal role in local maritime history. Boat builders worked along the shoreline for more than 250 years – and still do today. In the early 1900s, there were so many work boats it was said you could cross the creek by stepping from boat to boat. Among those boats were iconic Chesapeake skipjacks – sleek and narrow sailboats with huge main sails used for dredging oysters.

Today, the Long Wharf continues to demonstrate the rich maritime culture of the area as it welcomes recreational boaters into its public marina; hosts scores of heritage tourists from visiting cruise ships; and is home to the skipjack Nathan of Dorchester, which offers sailing tours interpreting the heritage of wooden shipbuilding and the traditional life of watermen, while dredging for oysters under sail.

At Long Wharf, visitors can enjoy skipjacks in all their glory during the annual skipjack races; view the smokestack that once hid the elevator on Franklin D. Roosevelt’s Presidential Yacht, the USS Potomac; and explore a replica screwpile lighthouse, illustrative of Chesapeake Bay lighthouses. 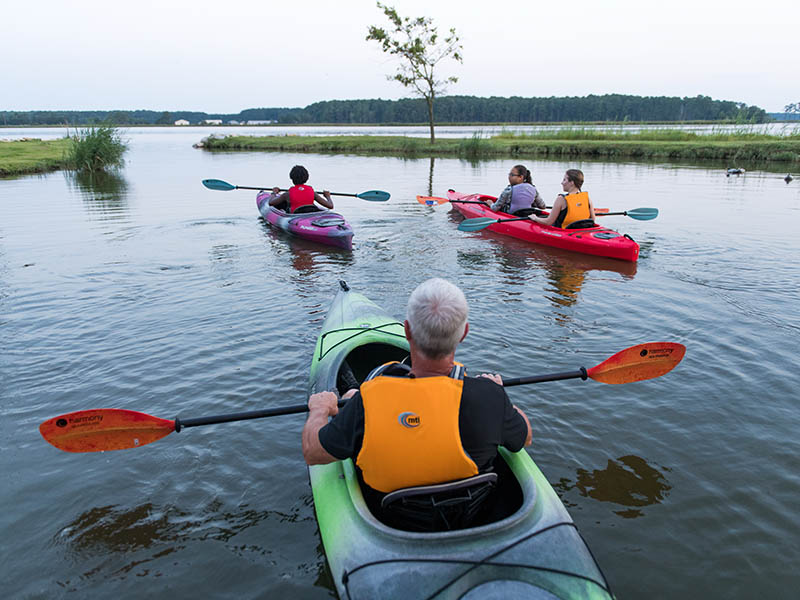 Often referred to as the “Everglades of the North,” Blackwater Wildlife Refuge (pictured above) is a treasure of the Chesapeake Bay region, offering a wealth of recreational and wildlife watching possibilities. With more than 20,000 acres of wildlife habitat, visitors enjoy the refuge year round in a variety of ways. Photographers, hikers, cyclists, paddlers and those who prefer to appreciate the scenery through the windshields of their cars flock to the refuge in synchrony with the waterfowl species who land to overwinter here.

The refuge includes a third of Maryland’s tidal wetlands and some of the most important habitat for birds along the critical migration path called the Atlantic Flyway. Blackwater contains the largest breeding population of American Bald Eagles on the East Coast north of Florida and shelters many other species, including the endangered Delmarva Fox Squirrel. Wintering species of Snow Geese, Tundra Swans, Canada Geese and 20 species of ducks can be observed from viewing platforms and bird blinds along the 3.6-mile Wildlife Drive along the Blackwater River. The drive and its trails weave through tidal marshes, mixed evergreen and deciduous hardwood forests with loblolly pines and white oak trees.

Three paddling trails for kayakers on the Blackwater and Little Blackwater Rivers cover 17 miles of the refuge. Several bike routes for novice to experienced cyclists include shorter loops along the paved Wildlife Drive, and 20-mile and 25-mile routes that follow county roads through the varied habitats.

In addition, nearly 15,000 refuge acres are open for deer hunting from September through January. The Blackwater Visitor Center holds exhibits, an upstairs observation area and library, an authentic eagle’s nest, and TV monitors for watching live video from the osprey and eagle cams. Outside the Center, visitors can enjoy meandering walking paths through Butterfly and Beneficial Insect gardens.

The Heart of Chesapeake Country Heritage Area and Dorchester County Tourism are part of the Chesapeake Country Scenic Byway Alliance, which submitted the application to unify the three sections of the 400-mile stretch on Maryland’s Eastern Shore and have it named as an All-American Road. The Alliance currently is working together to develop an interpretive plan to promote the Byway.

Download the map below to see the entire route and the sites along it. Additional information is available through the National Scenic Byway Foundation and Visit Maryland. 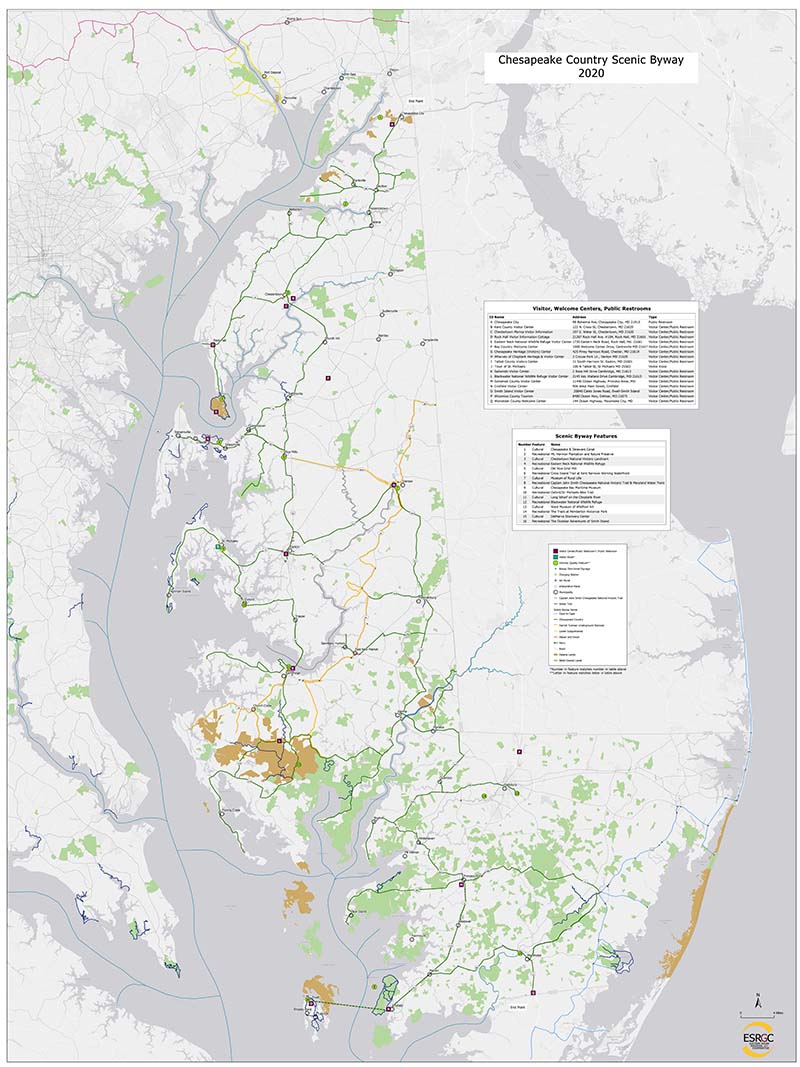