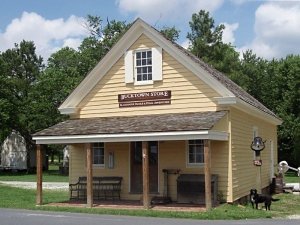 The Bucktown General Store is an authentic 19th century country store and is operated by the Bucktown Village Foundation, a 501c3 organization. The store operates as a museum featuring authentic African American artifacts related to slavery, various displays, and gifts within a country store setting.

Between 1834 and 1836 at this location, Harriet Tubman received a blow to her head that fractured her skull while she attempted to assist a fellow enslaved man. This has been called Tubman’s first public act of defiance. As a result of the injury, she experienced lifelong health problems and spiritual visions that changed her views and guided the rest of her life.  She went on to become one of the most famous abolitionists,  leading more than 70 people out of slavery to freedom along the Underground Railroad.

The site is open by reservation only. Reserve your spot online at bucktownstore.com or by phone at  410-901-9255. Free admission, but donations are welcome.

Monday-Saturday by chance or by reservation