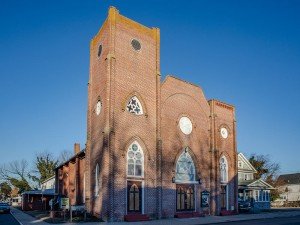 In the 1780s, African American Methodists in Philadelphia and Baltimore walked out of white-controlled Methodist churches to protest discriminatory treatment. In 1816, these independent black Methodists from Philadelphia, Baltimore, and elsewhere formally organized themselves as the “African Methodist Episcopal (AME) Church.”

In Cambridge AME ministers encountered resistance when they tried to establish a “Bethel Society” in 1830. But by 1847, Pine Street shoemaker Simon Brown and other local trustees of the Cambridge “African Methodist Bethel Church” obtained a deed for this property at 623 Pine Street. The original church apparently was a house that resident Stephen Camper moved here (for the Bethel Society). In 1877, that building burned and within two years a new church was constructed. Today the building looks as it did in 1903 when the new entrance facade with asymmetrical towers was added.

During the time of civil unrest in Cambridge in the 1960s, Bethel was considered the headquarters of the civil rights movement. Many rallies and meetings were held at Bethel to help with the fight for equality.