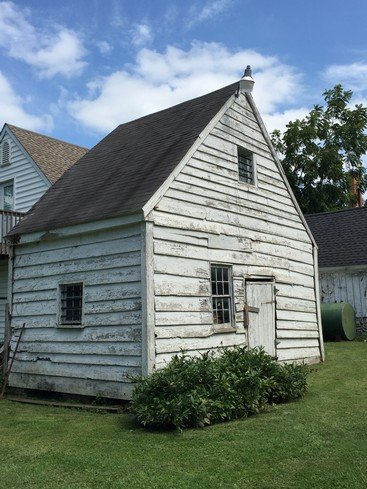 The structure behind the Bayly House is believed to have once served as slave quarters.

The unassuming and slightly dilapidated structure behind the grand Bayly House at 207 High Street in Cambridge could be quite a historically significant little building. As such, historians are requesting assistance from the public with an essential element of their research – finding descendants of the families and enslaved peoples who lived on the property over the past 250 years.

According to information found in the Maryland Inventory of Historic Properties, the Bayly House is probably the oldest dwelling in Cambridge, dating from the 1740s. But what has the attention of historians, architects and archaeologists now is the small structure in the backyard. They are working to document its provenance and verify whether it was once used as slave quarters. If confirmed, it would be a rare finding for an urban setting.

The Heart of Chesapeake Country Heritage Area (HCCHA) is collaborating with Catherine Morrison, the owner of the Bayly House on this project. The HCCHA has arranged for an archaeological team from the Maryland Department of Transportation to conduct an extensive study of the site in September and hopes to work toward stabilization of the building in the near future.

Integral to the on-site work is documentation of family histories of those who lived in the main house, as well as any descendants from enslaved people who may have worked for the Bayly family, said Julie Gilberto-Brady, manager of the Heart of Chesapeake Country Heritage Area.

“We are asking for assistance with our research,” Gilberto-Brady said. “We encourage anyone who has connections to the house or may be descended from its owners or descended from those who were enslaved on that property to contact us. We want to document as accurately and thoroughly as possible the history of that property because it will aid our researchers in their work to confirm the original purpose of the little building in the back yard.”

It is believed that the house was moved from Oxford, Maryland, and assembled in the 1750s on the site where the Dorchester County Courthouse currently is located. Shortly afterwards, it was moved across High Street to its present location to allow the Courthouse to be built. In the rear of the house are several outbuildings, one of which could be a slave cabin.

Architectural Historian Stephen Delsordo has evaluated the building and has stated that it was constructed prior to the middle of the 19th century by reusing material from older buildings, along with new building material. And according to Bayly family tradition, the outbuilding served as quarters for the house servants.

Morrison, the current homeowner, purchased the house in 2014. She has been restoring the exterior of the main house. She also wants to preserve the structure in the back and open it for educational purposes and tours, interpreting the life of the enslaved people that once lived there.

Anyone with information about pertinent family histories or descendants can contact Gilberto-Brady at julie@visitdorchester.org or 410-228-1000.