It was the kind of hot, muggy and overcast day where the humidity clings to your hair, your clothes and your skin within minutes of stepping outside, and the biting horseflies hover, following you in swarms. On her knees, wedged between two decaying floor beams, Catherine Morrison was happily digging in the dirt inside a stuffy, old cabin where spotlights illuminated pits and broken pieces of old pottery and buttons that had been discarded decades ago. In fact, Catherine was beaming.

She was in the midst of a long-awaited archaeological dig in her own back yard. It was a project she never would have dreamed of before moving into the historic Bayly house on Cambridge’s High Street nearly four years ago. Since then, she has found herself immersed in the history of what is believed to be the oldest house in Cambridge, as well as the cabin in the backyard, that has long been believed to be a dwelling for enslaved people in the 1800s. 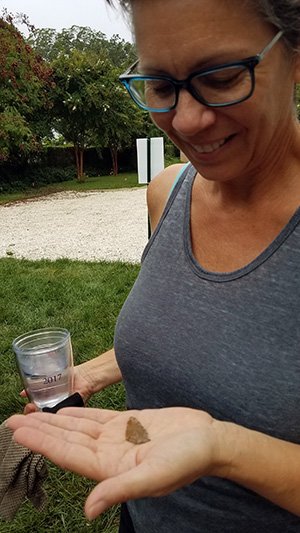 Catherine Morrison examines an arrowhead that archaeologists unearthed on her property.

Looking for the perfect house

After spending 15 years in Fort Lauderdale, Florida, Catherine had a daughter in college and decided to look for a permanent place to settle. Her Google searches focused on a list that included various combinations of keywords like “small, historic, walkable, livable, affordable and coastal.” She would pull up Google maps and peruse the Atlantic coastline, zooming in on small towns along the way. When she came to Cambridge and googled it for more information, she discovered that it had “a fantastic web presence.”

She had been envisioning a cute, Victorian home, and when she initially looked at the house, her first thought was that it looked so old.

“I was looking for something historic, and I wanted an old house,” Catherine said. “But I really didn’t know what I was getting into.

“Once they accepted my offer, I was so engaged,” Catherine said. “The more I read, the more I learned. My interest snowballed – even though this was clearly not my Victorian Dream House. The history was online when I was looking at the house, but I really didn’t appreciate that. It was just more information. I’m learning all of it as I live here. The more I learn, they more I realize how incredibly cool this thing is that I fell into.”

Catherine and her daughter moved in and immediately began work on stabilizing the house and making cosmetic repairs to the exterior. In what she describes as a “Tom Sawyer” moment on High Street, she recruited friends and had them all out front – having fun – sanding, scraping and painting the fence and porch railing.

Doing something about the building in the backyard weighed on the back of her mind, but the idea of tackling the project was overwhelming. She was curious about the “slave house” description that she kept hearing about the structure. She thought it was interesting but did not appreciate the potential significance of the building. Previous owners had treated it like an old shed and filled it with junk.

“I would walk by it every day to my car and look at it and know that it can’t be good just sitting here needing repairs and paint,” Catherine said. “It’s not like you can google ‘how do you restore a slave cabin?’ I was going to have to rely on other people to guide me.”

It was an observation that her mother made that aroused Catherine’s interest and proved to be the impetus for the path that brought her to today’s archaeological excavation.

Her mother had come across a New York Times article about the Slave Dwelling Project, which works to document and preserve slave dwellings throughout the United States. Wrapped up in the renovations and work she already had underway, Catherine filed the information away. A year later, she reached out to one of the organizers, as well as local historians and African-American leaders. She found that the interest, energy and support was there to do something with the cabin.

In October 2017, the Slave Dwelling Project came to Dorchester County, bringing attention to little-known county historic structures that once served as dwelling houses, churches or other cultural and utilitarian uses in the lives of African Americans. As part of the program, participants and attendees processed from the Dorchester County Courthouse to the Bayley cabin, where they continued their candlelight program with songs and inspirational words before about 12 people spent the night in the cabin.

As time passed, Catherine became more convinced that she had a responsibility to find out the true history of the cabin and take steps to preserve the structure. 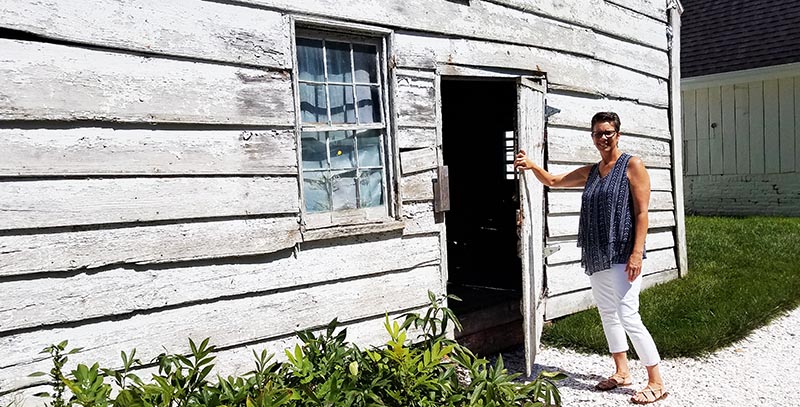 Catherine Morrison’s determination has set in motions research and preservation work for 19th century cabin behind her house.

Feeling the presence of those before her

As she began researching and reading about the house, she found it was easy to find mentions of the house in historic documents and papers. She discovered that she is only the sixth separate owner. The house always passed to family members and only had six complete changes in ownership.”

“I look around and try to picture people in colonial attire walking around these rooms, living their lives,” Catherine said. “It’s like a movie. The people in this home were always privileged, wealthy people even though it really is a simple house.

“What did they do? Who were they? That’s what interests me – the people, the daughters, the weddings, first days of school, Christmas’ dinners. There were so many generations.”

But it was not just the families who owned and lived in the main house who inspired Catherine.

“I wanted to acknowledge and recognize those souls who toiled here – their frustrations, their achievements, their lives,” Catherine said. “It’s the right thing to do. Sometimes you just find yourself in a place and time when something needs to be done. This needs to be done. I certainly didn’t expect it when I bought the house.”

Determining the purpose of the cabin 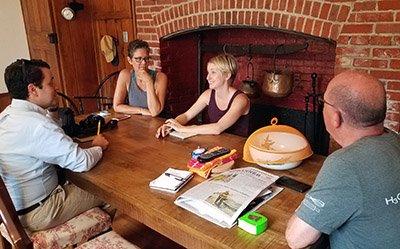 When she reached out to the community, Catherine discovered that many others shared her passion and were willing to assist – including the Heart of Chesapeake Country Heritage Area and the Maryland Department of Transportation State Highway Association (SHA). The SHA archaeologists became involved because of their expertise in African-American History and because the property is along the Harriet Tubman Underground Railroad Byway. Catherine also is collaborating with Dorchester County Government to provide viewing opportunities for the public, and the County has received two preservation grants to help stabilize the structure.

Within just a few days, the archaeologists had uncovered ceramics, buttons, buckshot, a pair of sewing scissors, medicine bottles and even an arrowhead. Most of the items dated to the 18th and 19th centuries. Even if the archaeologists cannot definitely state whether enslaved people lived in the cabin, their work will provide Catherine and the community with historical research and documentation, which bring the history of the neighborhood to life.

“When I bought the house, I didn’t realize its significance,” Catherine said. “I didn’t realize it is not a common thing. I thought all the houses up and down High Street had buildings behind them like this. I feel an obligation to share this history and open it to the public.”