To celebrate Dorchester County’s 350th anniversary, the Heart of Chesapeake Country Heritage Area has created a new cell phone app featuring a suite of walking and driving guides that showcase the unique history and heritage of Dorchester County.

The Visit Dorchester Audio Tour Guide is free and can downloaded from the Google Play Store for android devices and the App Store for iPhones. In addition to describing significant historical highlights, narrators note unique architectural details and share their own personal reflections and first-hand memories of events and activities related to the featured sites, said Julie Gilberto-Brady, manager of the Heart of Chesapeake Country Heritage Area.

“Our app invites visitors to immerse themselves in the rich history, culture and traditions of Dorchester County,” Gilberto-Brady said. “What I especially like about this guide and what makes it unique is that our narrators go beyond the expected facts and dates. Because many of them lived the events or have direct connections to the sites on the tour, our narrators are able to share candid, firsthand personal perspectives.

“You also have easy access to compelling descriptions for iconic sites and historical events. The audio guides enrich visitor experiences by enabling them to proceed at their own pace and by presenting content that enhances written brochures. They eliminate the need to read through long text descriptions, the need for docents and the need to maintain long interpretive signs at designated sites.” 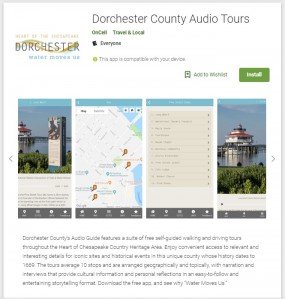 The Pine Street Tour, the first of the three guides to be released, focuses on African-American history and heritage in Cambridge. Local historians and residents with connections to the featured sites and significant events narrate each stop.

For instance, Dion Banks talks about Long Wharf, providing historical background. Then he shares how he has traced his family history and that his ancestors were unloaded from slave ships at this spot. His poignant reflection includes how he tries to see the landscape through their eyes and their perspective.

The tour proceeds up historic High Street with a story from the last known surviving African-American skipjack captain and stops at a house along the Harriet Tubman Underground Railroad Byway and the Dorchester County Courthouse. As visitors continue to Pine Street, narrators share firsthand memories of the neighborhood’s heyday, when the area had so much energy it was nicknamed “Little New York.”

As part of the Chitlin’ Circuit, entertainment venues in this area hosted some of the greatest names in music during the ’20s, ’30s, ’40s, ’50s and early ’60s. In this segment of the tour, Greg Meekins notes that the historical nature of blues and jazz still resonate on Pine Street. But he also pauses to describe how vividly he remembers the night in 1967 when a devastating fire on Pine Street consumed the majority of the neighborhood’s black businesses.

As travelers walk in the footsteps of Gloria Richardson, they will hear compelling descriptions of the turbulent 1960s when Pine Street thrust Cambridge before a worldwide audience, and it emerged as one of the most important battlegrounds in the Civil Rights movement. And they will hear the reminiscences of long-time residents who attended the segregated school on Pine Street and who helped make the renowned pies and “beaten biscuits” that were the specialty of the neighborhood bakery.

The Pine Street Tour includes 11 stops. Additional tours, focusing on Downtown Cambridge and the Chesapeake Mural Trail, will be released in May and June. They also will be available on the same Visit Dorchester app.

Download the free Visit Dorchester app from the Google Play Store for android devices or from the App Store for iPhones and iPads.