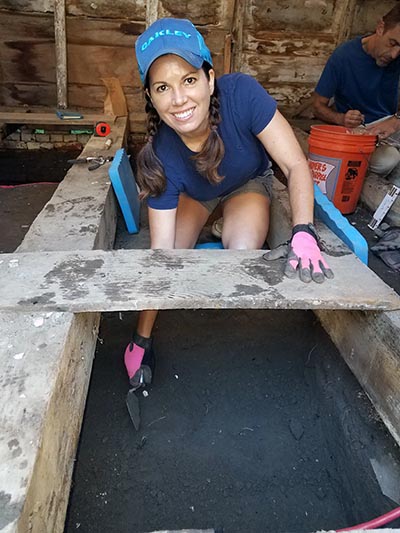 Dr. Julie Schablitsky works inside the cabin behind the Bayly house, digging for artifacts that will provide clues to help determine the structure’s history.

Painstakingly running her fingers through the dirt, Dr. Julie Schablitsky brushes aside a few crumbs to reveal a sliver of ceramics and looks up with a gleam in her eye. It could be a piece of a plate or a pitcher, but more importantly, it appears to be pre-Civil War – a find that is important to the research into the history of the 19th-century structure behind the historic Bayly House in Cambridge.

Dr. Schablitsky, who is the chief archaeologist for the Maryland Department of Transportation State Highway Administration (MDOT SHA), is spending two weeks with her team at this site along the Harriet Tubman Underground Railroad Byway. The project, in partnership with the Heart of Chesapeake Country Heritage Area, is to help determine the purpose of the cabin and whether it could have been used as housing for enslaved African-Americans in the 1800s.

“I am interested in the Bayly property for several reasons,” Dr. Schablitsky said. “First, it is an opportunity to discover and interpret Cambridge’s African-American history and their association with the Harriet Tubman Underground Railroad Byway. There are many lost and untold stories out there, and this is a rare opportunity to work with a very supportive and interested landowner, Catherine Morrison.

“Over the past several years, we have worked on a rare, slave quarter site in Anne Arundel County, a Civil War Training Camp for Colored Troops, and on two very important African-American cemeteries. One of those burial grounds was over 200 years old and held enslaved African-Americans while the other was a 100-year-old Baptist Cemetery. The Bayly site is unique to us since it is located on the eastern shore of Maryland and is in a neighborhood.” 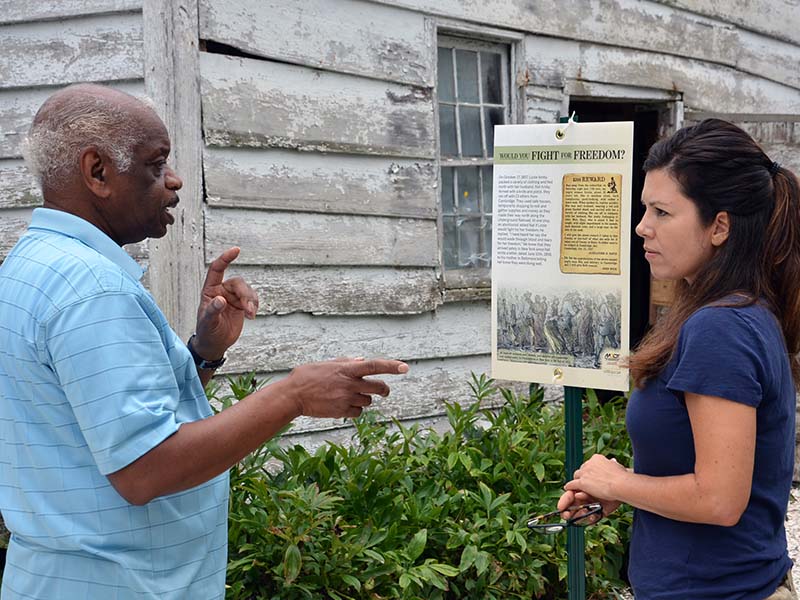 In just a week, Dr. Schablitsky’s team has unearthed numerous artifacts, each one with its own story to enrich the history of this site.

There are the mid-1700s Rhenish ceramics, made in Germany, traded to the British and shipped to Maryland. There is the Dalby’s Carminativ medicine bottle, which would have been imported from England in the mid-1800s and administered to colicky babies. There are the numerous buttons – the kind used on fancy waistcoats as well as simple under shirts. There are a pair of 19th-century sewing scissors and part of a wine bottle with a pontil mark, which indicates it was blown freehand. There also are the clay tobacco pipe stems, which could possibly yield human DNA through genetic testing.

There are hundreds more artifacts. Each subsequent discovery elicits just as much enthusiasm and deliberation as the first pieces that were lifted carefully from the dirt at this site. That genuine enthusiasm is so contagious that observers ask to join her in the dirt and mud, crouched and sweating in the humid cabin and enduring the annoying horseflies in the yard nearby. Even the homeowner, whose once-nicely landscaped yard is now pockmarked with pits, is encouraging more digging.

Through it all, Dr. Schablitsky encourages each inquiry, pausing to explain the source of a piece of glass or note the origin of a piece of pottery or suggest a website for more information and photos. She effortlessly and knowledgeably shares the relevance of each find and how it relates to this particular site, as well as other known excavations. 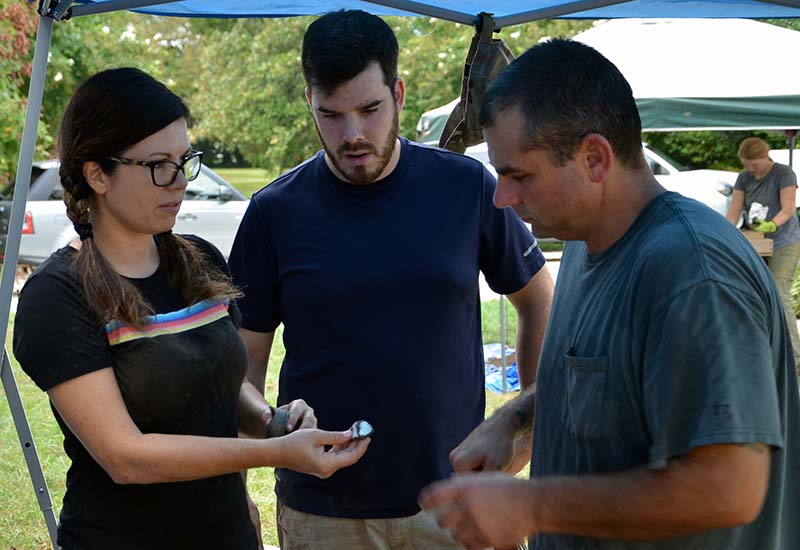 Dr. Julie Schablitsky and members of her team discuss some of the artifacts unearthed at the Bayly property.

An interest that took root in childhood

Dr. Schablitsky’s demonstrated passion and commitment to archaeology took root when she was in elementary school. An avid reader of National Geographic magazine articles about exotic people and faraway places, she recalls that in one issue, she found a centerfold of Ramses II. His mummy was so mesmerizing that she taped the Egyptian king on her bedroom door next to Billy Idol and John Stamos.

That fervor is evident is so many ways. Even though she was not interested in going into academia, she chose to pursue doctoral degree because it was a personal and public way to demonstrate her commitment to the discipline. Even her vacations often involve volunteering for additional archaeology work at exotic places like a late-medieval tower house in southern Scotland.

In Maryland, Dr. Schablitsky usually takes several weeks during the summer to direct archaeological projects along transportation landscapes. The places she investigates along the highway include everything from seventeenth-century plantations to shipwrecks.

When she worked on the Belvoir Plantation in Maryland, she regularly engaged with the descendants of enslaved African-Americans who lived on the site 200 years ago. As part of the public outreach component of the project, she delivered public presentations and coordinated meetings and site tours with the local community and agencies. 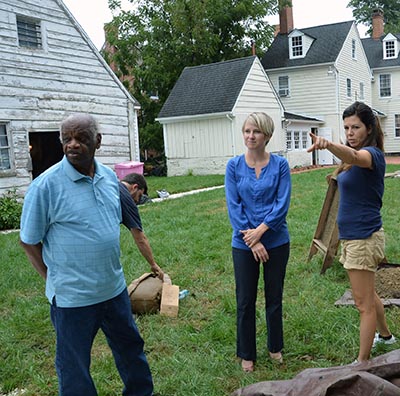 “The most rewarding aspect of this work is watching it transform into a community project,” Dr. Schablitsky said. “This is the setting where you realize that archaeology is not just about artifacts, it is about people.”

She feels the same way about being in Cambridge. Just as important as the discoveries about people and their lives that can be made by removing layers of dirt are the related connections that are made in the living community above ground. She has gone out of her way to meet with local historians, research the Bayly family history and also arranged for a field trip for Dorchester County 9th graders who are studying the Civil War and slavery. She plans to return in a few months to give a public presentation about the research.

“The most fulfilling part about being an archaeologist is working with living people who have a connection to the place you are studying,” Dr. Schablitsky said. “There is a bond that grows between landowners and archaeologists when we come together to learn the history of a site that no one else knows.

“We make the discoveries together and end up meeting people who lived hundreds of years ago in their backyard. With the Bayly Historic Site, Catherine Morrison knows how special her place is, and we are there to assist her in interpreting the clues left behind. The public has a chance to watch us find the puzzle pieces one by one and put the story together about the people who once called this place home.” 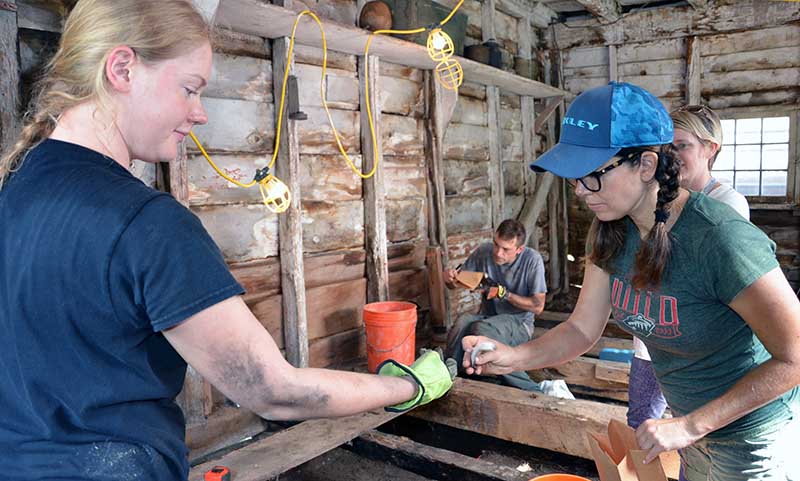 Archaeologists work inside the 19th-century cabin on the Bayly site.

Dr. Schablitsky grew up in rural Minnesota and attended college in the West and Midwest. Her early field work included positions in Wyoming, Michigan and Oregon. This is where she built a foundation in archaeology methods and narrowed her research interest to historic-period archaeology. The people who lived here only 150 years ago interested her, and it was easy to get to know them through their familiar material culture, old photographs and writings.

“I moved to Maryland 13 years ago and immediately fell in love with its early colonial roots, places and stories,” Dr. Schablitsky said. “The Eastern Shore has a feeling of a place that time forgot. Its natural and cultural history feels preserved and unspoiled. It’s very easy to walk down High Street today in Cambridge and forget what year it is. I am sure if Dr. Alexander Bayly returned today, he would have no problem recognizing his home.”