Tracing the footsteps of Harriet Tubman through Dorchester County, Maryland

Story and Photos by Abby Stewart

I’ve never felt the presence of a hero as strongly as I did when I visited Dorchester County, Maryland. Around every corner, in the tidal streams, and on the wings of every eagle flying overhead, the essence of Harriet Tubman lives on in Dorchester County. The famous abolitionist, who escaped slavery and returned repeatedly to Maryland’s Eastern Shore to guide more than 70 others to freedom, cast a light so bright that it continues to shine down on us to this day.

As I drove into Dorchester County, the birthplace of Tubman and the area in which she was enslaved until she escaped in her late 20s, I thought of my upcoming journey. I planned to travel the Harriet Tubman Underground Railroad Byway, a self-guided scenic tour that includes 21 sites in Dorchester County, creating a comprehensive look into the life of Tubman and the region that shaped her early years. As a history teacher, I was preparing for an upcoming lesson on Tubman and I found it unfortunate that there is so little about this American hero in our textbooks, so I decided to enhance my lesson plans with personal experiences from Tubman’s birthplace. I had no idea how touched and inspired I would be by the end of the trip. 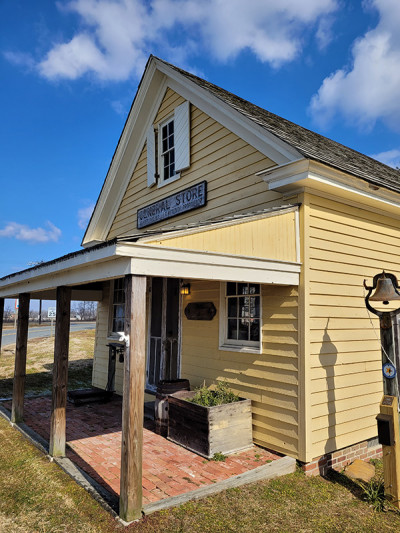 Araminta Ross, a slave in Dorchester County in the 1830s, pushed the door open to the general store to find herself in the middle of a confrontation. An enslaved boy was trying to run from his angry master, so the man ordered Araminta to stop the boy, but she refused. The slavemaster then grabbed a 2-pound counterweight and hurled it at the boy, missing him but striking Araminta in the head instead, cracking her skull and leaving her unconscious. The girl would later be known to the world as Harriet Tubman, and this act of defiance would be the first on a list too long to count.

I pulled up to the Bucktown General Store, a quaint country shop positioned in the center of a crossroads, the same building where that momentous event took place, almost 200 years ago. As I walked in, I felt like I was transported back in time. I was greeted by Matt Meredith, one of the owners and a man whose fifth great-grandfather ran the store when Harriet received her near-fatal injury. The dusty wooden floors and pitted countertops exhibited marks and wear and tear that are reminiscent of when Harriet would have shopped there. The Meredith family’s mission is to preserve the store and surrounding historical homes, in order to pass down Harriet’s story as authentically as possible. 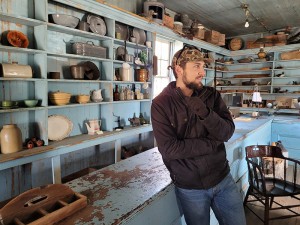 I learned that the injuries Harriet sustained on that fateful day ultimately changed the trajectory of her life, and in turn the lives of hundreds of enslaved people. The deadly blow, coupled with the absence of allowed medical treatment, other than the care from her mother, caused Harriet to suffer from narcoleptic sleeping spells, seizures, and visions for the rest of her life. She considered these episodes as blessings in disguise, as they were messages from God that helped her when she led her missions to freedom. The experiences deepened her connection with God, and it was that relationship and divine guidance that that carried Harriet forward in the face of adversity to free so many of her people from the atrocities of slavery.

While still at the store, I opened the virtual tour on the Harriet Tubman Byway App on my phone, chose site #17 for the Bucktown Store, and stood outside viewing through my screen what Bucktown really looked like in the 1830s. The dirt roads ran in the same place as the paved ones do today and virtual characters told stories about what it was like to be a slave or a slave owner in Bucktown, deepening my understanding of the past. I’ve never had a travel experience quite like that before, and as a teacher of history, I can’t wait to share the app with my students and guide them interactively through the adventure I had in Dorchester County. 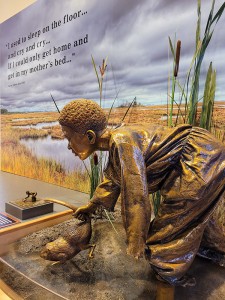 Beauty is in the details, and that couldn’t be more true at the impressive Harriet Tubman Underground Railroad Visitor Center, just minutes down the road from the store. From sculptural depictions of Harriet hunting muskrat and pulling slaves into her Union boat to row to freedom, to informative videos, music, inspirational quotes, and untold vignettes detailing Harriet’s life, the multi-sensory exhibits in the Visitor Center give you an expansive look into who Harriet Tubman really was.

My favorite part of the tour actually occurred within the first few minutes. Without knowing that it was intentional, I noticed the feel of the room where we began was confined and darker than I expected. The tour guide brought to my attention that this was to represent the oppression in the south, and as the details were carefully considered at the Visitor Center, the room actually occupies the south end of the building. Looking north, I could see the room was filled with light and opportunity; it was freedom. My eyes filled with tears as my heart felt a hint of what freedom might have felt like to a slave, a perspective I’ve never encountered before and one I was grateful to receive. 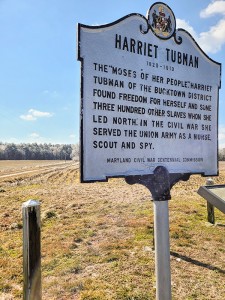 A brisk wind blew against my face, and with it came a sense of relief and opportunity. I stood before the Brodess Farm, site #16 on the Byway, the same farm Harriet and her family worked often when she was young. As a location where Harriet was enslaved, I thought I would have felt sorrow, but the energy of personal liberation and strength seem to endure much stronger.

A modern gate guarded the road that runs to the house where the Brodess’ home used to stand. I paused there in reverent reflection and Harriet’s freedom song came to mind. “I’ll meet you in the mornin’, safe in the promised land,” words that likely brought comfort to Harriet and her family as they worked this farm against their will, dreaming of one day gaining their freedom. Thanks to Harriet, that freedom came, and as she opened up a similar gate on a farm not too far away, Harriet sang those words as a goodbye song to her family and friends as she escaped, returning only to rescue them. You can feel the doors of your heart open up in that place.

One of the most extraordinary facts about Harriet is that not only did she lead more than 70 slaves to freedom from Maryland, but she also became a nurse, scout, and spy for the Union army in the Civil War, at the request of the Governor of Massachusetts. It wasn’t until my tour through the Visitor Center, however, that I discovered she also became the first woman in U.S. history to plan and lead an armed assault. The story of a young slave escaping on her own, only to lead her own army troops to rescue others is one of the most incredible tales I have ever heard. 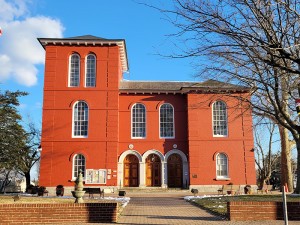 At the end of a beautiful brick-paved street called High Street in Cambridge, I found site #4 on the Byway, Long Wharf Park. A picture-perfect Farmer’s Market was set up there, so I picked up gifts for my return home. Long Wharf, however, did not have such a pleasant story. I walked down the long dock towards the beautiful Choptank Lighthouse while I listened to the app, learning that ships from Africa and the West Indies actually brought kidnapped Africans to sell along the waterfront. I stood for a moment of silence for the poor souls whose lives were taken by the tyrants of slavery. With such beauty all around, it’s hard to believe that such atrocities occurred here.

Driving back down High Street to view the beautiful Victorian homes I saw on my way in, I approached the Dorchester County Courthouse, site #3, so I eased to a stop and hit play on the audio app, again learning an interesting story as I walked around the grounds of the courthouse. It turned out that I was walking right past the old auction block, where a daring escape and rescue was made of Tubman’s niece and two daughters, just before they were sold.

The audio tour app made it perfect for me to hop around easily from one site to the next, giving clear directions to and from the sites with interesting information played in between to enhance the driving experience. I enjoyed driving around downtown listening to the backstories of the sites I was seeing. 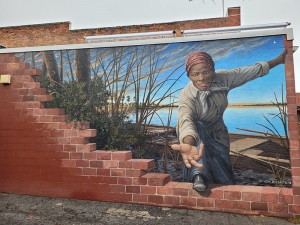 Every now and then a work of art can move you to tears. I turned off of Race Street in Downtown Cambridge, walking along an open alleyway only to round the corner to have my breath taken away. “Take My Hand,” painted by Michael Rosato, depicts Tubman in a larger-than-life mural. Standing before it, strong emotions are evoked, as Tubman appears to be reaching her hand out of the wall of the Harriet Tubman Museum to help you across an obstacle to freedom behind her. Her gentle yet confident facial expression and the strength in her hands make you understand why people call her Moses.

My experience in Dorchester County was an all-encompassing journey into the life and triumph of Harriet Tubman. It far surpassed anything I could read in a history book or see on the big screen; to walk in the place where she led others to freedom was an experience unparalleled. I soaked in all that was around me and I was transported. What sets this historical place apart from others is that it not only covers a large area, as she left her mark everywhere she went, but the beautiful thing about Dorchester County is that so little has changed that Tubman herself would recognize the landscape even today. I could feel her spirit walking with me, leading me, and smiling down on the legacy of hope, perseverance, and justice that is still felt and upheld in her name today. I vow to continue to share her story in my classroom and hope that her principles and example live on for generations to come; we owe it to Harriet to keep her legacy and incredible journey alive.