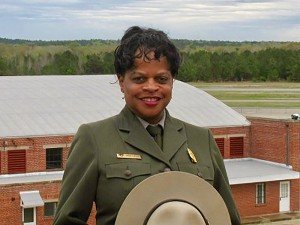 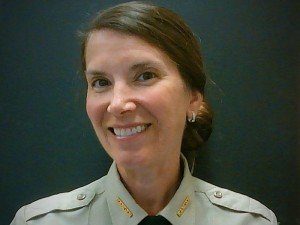 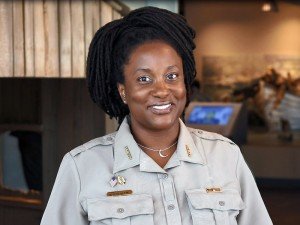 March 10 marks Harriet Tubman Day in Maryland. To commemorate her legacy – and the third anniversary of the Harriet Tubman Underground Railroad (UGRR) Visitor Center – we spoke with three women whose paths converged at the national monument and state park that bear her name. Read our interview and decide whether it was fate or destiny that brought this talented team of environmentalists, storytellers, and park leaders to Church Creek, Maryland. (Pictured above from left: Deanna Mitchell, superintendent, Harriet Tubman UGRR National Historical Park; and Dana Paterra, manager, and Angela Crenshaw, assistant manager, Harriet Tubman UGRR State Park.)

When do you recall first hearing Harriet Tubman’s name? 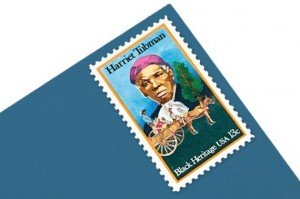 DEANNA MITCHELL: As a teenager, my mom – who was born and raised on a farm in Somerset County – gave my sisters and I a pin that was fashioned after the first USPS Black Heritage USA stamp series commemorating Harriet Tubman. Through my mom, I learned about Harriet’s early life as a slave on the Eastern Shore and how she achieved freedom.

DANA PATERRA: Growing up on the Eastern Shore of Virginia, I recall first learning about Harriet in school when we were taught about the Underground Railroad network and conductors.

ANGIE CRENSHAW: I also recall learning about Harriet in school – but it was very superficial – nothing about where she was born in Maryland or how she emancipated family and friends. My mother then impressed on me that it was my responsibility to know and understand our history as it informs our present and future.

What brought you to the Harriet Tubman UGRR Visitor Center?

DEANNA: After helping open the Tuskegee Airmen National Historic Site – where I was park manager for 10 years – I moved to D.C. I had just finished a two-year NPS Bevinetto Fellowship in Washington when the superintendent opportunity was posted. I applied for the job and was blessed to be selected. I grew up in Maryland, so it was a chance to come home.

DANA: I returned to the Shore from South Carolina to be closer to family. I worked in Charleston and had the good fortune to work with amazing historians at the Caw Caw Interpretive Center based on a former rice plantation. My mentors there taught me about the horrors enslaved people endured on plantations. I wanted to be part of the launch team and believed my work in South Carolina had prepared me for the challenge. 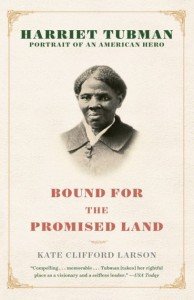 ANGIE: I grew up exploring Gunpowder Falls State Park and developed a passion for the environment and nature. I was working as a park ranger at Elk Neck State Park when I was asked to teach Multi-Cultural and Diversity Awareness at Maryland Park Service’s Ranger School in 2015. After my presentation, Dana mentioned the opportunity to work at Harriet Tubman UGRR State Park and invited me to visit. After visiting sites on the Harriet Tubman UGGR Byway and the Visitor Center while it was under construction, I was inspired to read Kate Clifford Larson’s biography, Bound for the Promised Land. It  changed me, made me bolder, and I felt compelled to move to Church Creek and share Harriet’s story with park visitors.

How did your previous experience or personal interests help you on Team Tubman?

DEANNA: With 31 years in the federal government – the last 15 in the National Parks Service – I drew on my experience with cultural historic sites and professional organizations. I was able to tap into my time at Tuskegee to meet the challenges at this historic site. Also, my background in outreach and partnerships has played a big role in helping to create and sustain new alliances as part of Team Tubman.

DANA: Whether managing wetlands created by the one-time plantation rice fields or interpreting slavery’s chilling past, I was able to share how an informed sense of place creates powerful emotional connections. When people have knowledge  and opportunity to experience those stories, it makes historic interpretation very tangible. From exhibit design and construction to staffing and operations, being part of the team that helped bring an idea 30 years in the making across the finish line gave me the confidence to convey this unique site.

ANGIE: When I first moved here, I didn’t have cable or internet, so I read a lot of books about slavery, the religion of enslaved people and the Underground Railroad. I also immersed myself into her landscape. I gained a great deal of knowledge and insight about Harriet, the land, and many aspects of African-American culture. I feel connected to history living and working here and it gives me a powerful opportunity to share what I’ve learned with our visitors.

What would you like others to know about Harriet’s life and legacy?

DEANNA: Most people don’t know that Harriet couldn’t read or write, that she was functionally “illiterate.” When they visit the center, they experience – and begin to understand – the magnitude of her accomplishments and life story. I want people to learn that Harriet was revered by and a friend to many highly educated and powerful people during her time, including abolitionist Frederick Douglas, U.S. Secretary of State William H. Seward, and women’s rights activist Susan B. Anthony.

DANA: Harriet was a dedicated suffragette. Despite freeing enslaved people, fighting for her country, assisting the elderly and campaigning for voting rights, she sadly was never able to vote herself. Because she touched so many lives, her story connects with women, veterans, people of color, families, and the elderly.

ANGIE: A lot of our visitors are groups such as sororities or churches. They’re often familiar with Harriet as a freedom fighter and abolitionist but unaware of and moved by her personal story, the softer side of Harriet. They’re surprised to learn that her husband John choose to stay in Dorchester and marry another woman rather than escape with Harriet. Moms and kids relate to how Harriet was taken from her mother when she was only six to work in the fields. Mothers cannot fathom their children being taken from them and mistreated, and children cannot wrap their minds around life without their moms. 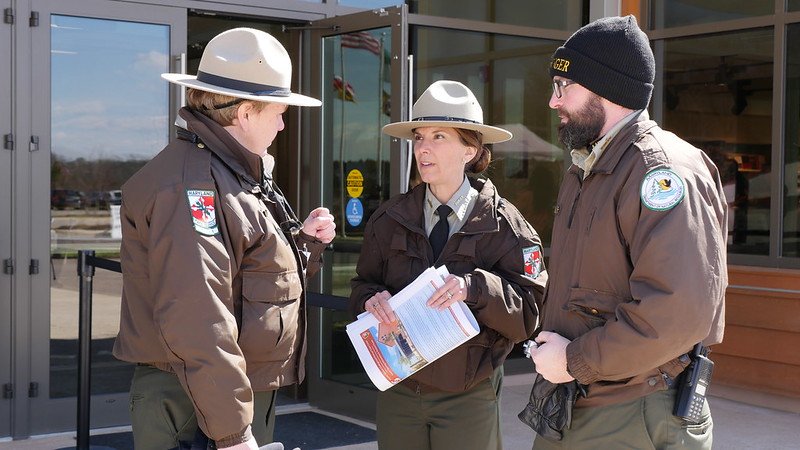 How does Harriet inspire women and girls?

DEANNA: Harriet inspired a national movement with GirlTrek – a wellness and advocacy organization that seeks to galvanize women to “walk their freedom, truth and journey.”

DANA: Every time Harriet returned to Dorchester, it was to rescue her family. Her love of family is a universal truth everyone understands. She demonstrates that ordinary people are capable of doing extraordinary things.

ANGIE: As a ranger, I think of myself as an outdoors woman, but Harriet was the ultimate outdoors woman. I work with groups such as Outdoor Afro, GirlTrek and Girl Scouts to bring women and girls to Tubman Country to have a personal connection with Harriet. After experiencing our exhibits and the landscape that shaped her, they are inspired by her inner strength, indomitable will and her desire to improve her life and lives of those she loved. Harriet Tubman was motivated by love and women truly connect with the love that was required to do everything she did.

As we celebrate the Year of the Women – and commemorate the 19th Amendment’s Centennial – what lessons can we draw from Harriet Tubman?

DEANNA: Harriet showed us there are followers – and there are leaders. She was a leader for enslaved people, women, and the elderly. If someone tells you can’t do it, prove them wrong and do it.

DANA: Tubman’s role bridging America’s segregated history has forged connections that help people not only relate to the past and each other but to our individual selves.

ANGIE: Lean on love. Love is free. We don’t need much in life to give or receive love. If Harriet Tubman could give her love so freely, then everyone has the ability.