50 Years of the Spocott Windmill: How It All Began

50 Years of the Spocott Windmill: How It All Began 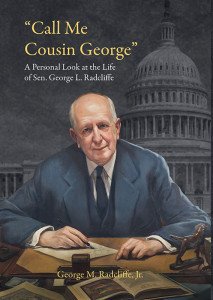 This is a guest blog about the origins of the Spocott Windmill, which marks its 50th anniversary in 2022. This is an excerpt from a new book “’Call Me Cousin George:’ A Personal Look at the Life of Sen. George L. Radcliffe” written by his grandson George M. Radcliffe, who is now chief caretaker of Spocott Windmill and Village. All are invited to Spocott’s 50th anniversary event on April 23, 2022.

If you’d like to visit Spocott, it’s located at 1609 Hudson Road in Cambridge’s Neck District community.  The grounds are open for self-guided visits from sunrise to sunset daily.

The Dreams of a Ten-year-old Child 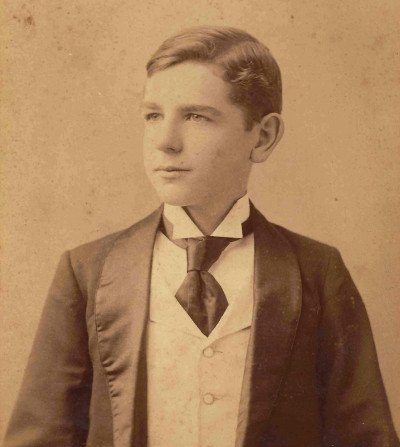 Winters were more severe when George L. Radcliffe was a child. His brother Tom would don a pair of skates once each winter, skate out the Little Choptank River to the Chesapeake Bay, and then up the Bay to Annapolis. The winter of 1888 was likely a cold one, but by early March, faint signs of spring were appearing. However, on March 11 of that year, winter returned with a vengeance. The Northeast was devastated with a major storm, with up to sixty inches of snow, toppled trees, downed telegraph wires, damaged barns, and transportation basically halted on the East Coast.

When ten-year-old George L. Radcliffe and his father were able to get out and survey the aftermath of the storm, they found considerable damage, but most noticeable was the pile of rubble which had been his father’s windmill at the head of Gary’s Creek. John Anthony LeCompte Radcliffe built the mill in 1852, and for close to four decades, the mill had allowed the family and others in the community to turn grain into the meal needed for cooking. The mill had completely collapsed, and a seventy-year-old John decided not to rebuild it.

Some children dream of accomplishing great things or being a star, but young George in 1888 had a novel dream: he would one day rebuild this father’s windmill. In the next year, with help, he was able to salvage the two heavy millstones, and the steps leading up from the first to the second story. The remainder of the mill was completely demolished. He moved the stones and steps to a Spocott barn, and told all that someday he would resurrect the mill.

Over eighty years would pass, and all memories of the mill were long erased—but not from George’s mind. In 1970, he returned to his never forgotten childhood dream. It was time to rebuild his father’s windmill. However, in 1970, windmills were part of the memory of a distant past.

In the nineteenth century in this area of Dorchester County, Maryland, farming, shipbuilding, and mills made a logical trifecta. Because this area was isolated by the Bay and the Choptank River, farmers needed ships to get their crops to a market. Mills were needed to turn the grain they grew into usable flour. While Dorchester County had once been the home of at least twenty windmills (1877), the remains of the last had gone down in a hurricane in the 1950s. Water mills were more practical in areas where there was flowing water. Western and southern Dorchester County were flat, much of it not much higher than the level of a high tide, and only a wind-powered mill could be built in these areas. Using many of his shipbuilding skills, John Anthony LeCompte Radcliffe built several mills in this area of the county. However, by 1970, these skills were long gone, and George somehow had to find a windmill builder.

While boat building was a dying art, across the road from Spocott there was still a boatyard run by a remarkable gentleman. James Richardson, or “Captain Jim” as so many called him, was a boat builder from the old school and owner of Richardson Boat Yard. His family had built ships since the seventeenth century, and he was nationally known for boat restoration, having restored several historic vessels. He would later be the one selected to build a replica of the Dove, one of the two ships that landed in St. Mary’s City in 1634, the founding of Maryland. George would approach Jim with the task of rebuilding the windmill. We can only imagine what Jim’s initial reaction was, but George, in his legendary, low-keyed method of persuasion, did get Jim to agree to the project. However, there was no manual for how to build a windmill, with no one having built one for almost a century. 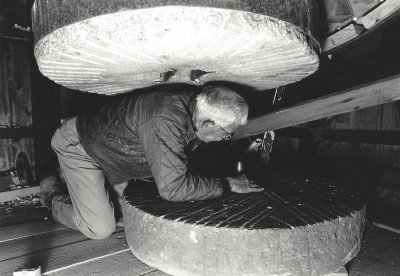 Quite likely, Jim was the only one who could have built the mill, but even he had no idea where to start. George, of course, had to locate the funding for the project, but this was a skill he excelled in. As he had done many times before, he turned to family. A cousin living in Atlanta, Georgia, Walter Clay Hill, Jr., immediately embraced the project. His mother, Rebecca Beckwith Travers (1886–1967), was the granddaughter of John Anthony LeCompte Radcliffe and had spent considerable time at Spocott as a child. She and George had remained close throughout her life, and her son Walter was more than happy to fund the mill as both a memorial to his mother and his great-grandfather.

Meanwhile, Jim Richardson was beginning his search for how to build a windmill. The original Spocott windmill had been an English post mill, in which the entire two-story mill housing rests on one post, allowing it to be turned into the wind. A tailpole extended out from the building to a wheel, and by turning the wheel, one could rotate the entire building to whatever direction the wind was coming from on a particular day. The blades of the mill were attached to a main shaft, and its rotation was transferred by gears to the top millstone, where the corn was turned into meal. Jim had photos of old mills to study, several books from England and Holland to use, and the Williamsburg windmill, which needed auxiliary power to work, to examine.

George was not going to let the project die, and Jim Richardson was certainly not a quitter. At his boatyard, Jim started building and continually modified a model of a potential mill. As he would say:

What we had to do was construct our mill by trial and error, using our own ideas. When we ran into a problem, we simply had to figure it out ourselves. Sometimes we guessed right and sometimes we didn’t.

This was going to be a process of trial and error, and he eventually had a model which seemed to work. Using this boatyard crew and some additional volunteers, construction began. Jim’s son-in-law, Tom Howell, took charge of the construction with Jim supervising every step and doing much of the work. This became a labor of love. Jim Richardson was the mastermind of the operation and was a perfectionist. He may have even lost money on the whole project, but the resulting mill stands as a memorial to a remarkable craftsman and person. 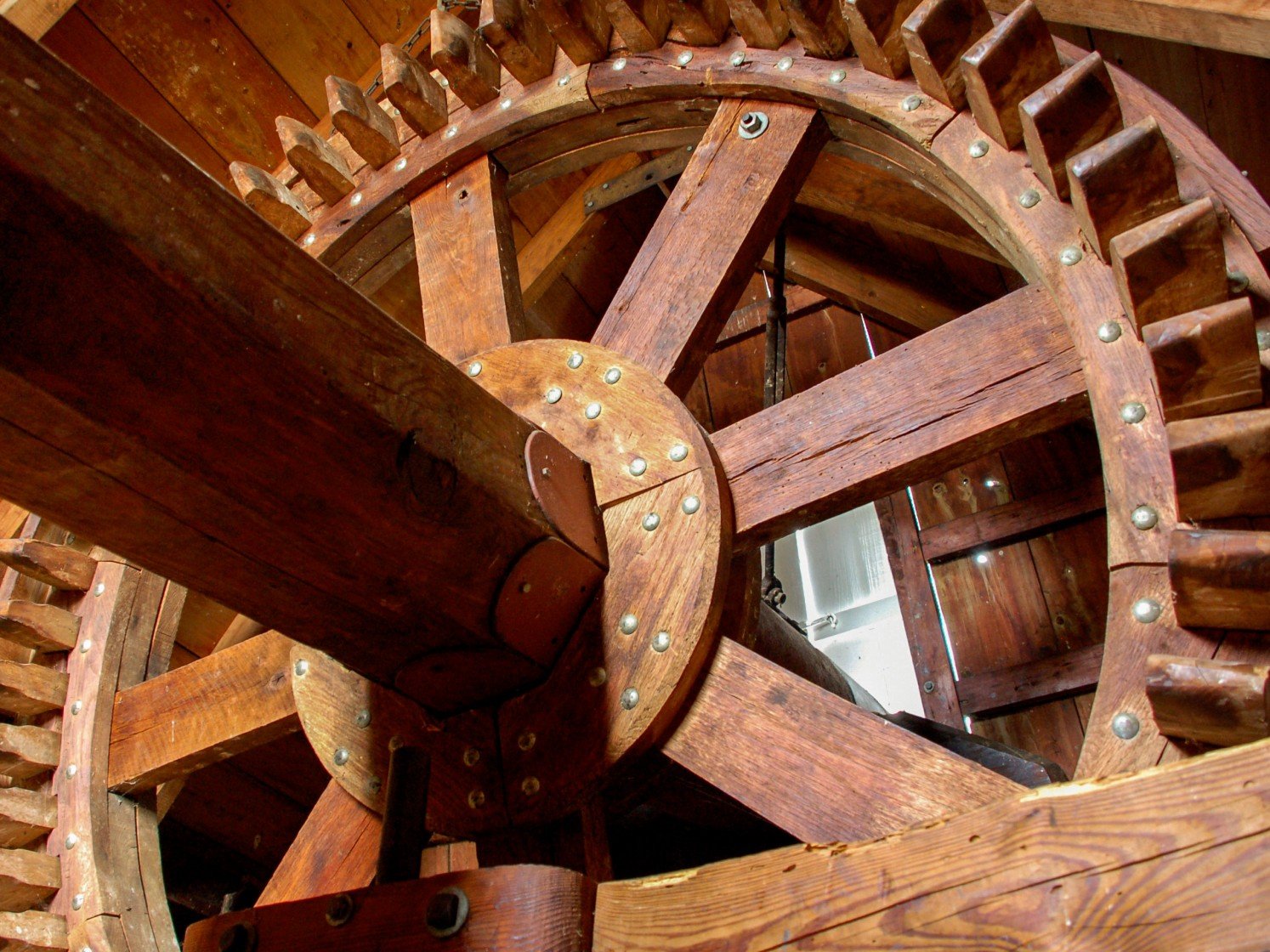 All the timbers for the mill came from the nearby Spocott woodland, exactly where George’s father would have gotten the timber for the original mill, and considerable time was invested in finding just the right trees for the construction, which took more than a year. The critical piece of timber was the central post around which the three-ton base was constructed. Jim, George, and others finally located the perfect four-foot diameter oak, and this was dressed down to the central post, two-foot wide at the base. Oak was used for the rest of the framework while pine was used for the building.

The original 700-pound stones were used, and the mill was assembled in pieces at the Richardson Boat Yard and gradually moved into place. George watched with the enthusiasm of that child, who had seen his father’s amazing mill years earlier. The four twenty-eight-foot blades had to, along with the building, be perfectly balanced. As Tom Howell would explain, if the mill building were even slightly off or the blades and weight not perfectly distributed, the vibration from the awesome power generated would have ripped the entire structure apart. Fifty years after its construction, the mill operates with virtually no vibration as the blades spin and that massive top stone rotates over the stationary bed stone. 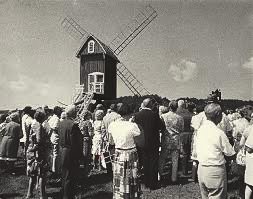 George and his son George M. set up the Spocott Windmill Foundation, Inc., and the basic construction was completed in 1972. The dedication was set for August 22, 1972, the senator’s ninety-fifth birthday. Citizens, family, politicians, and friends showed up for the combination dedication and birthday party at the nearby firehouse. George, never one to pass up an opportunity to speak, thanked the many individuals who had helped him realize his dream. He had waited eighty-five years for that moment, and he relished every moment of that wonderful summer day. He lived just two more years, and he visited that mill many times.
The mill was actually not completed when it was dedicated, but then ninety-fifth birthdays only happen once. The following year saw the construction of the gears. The seven-foot oak gear wheel was fitted with fifty-one beechwood teeth which turned the spindle attached to the upper stone. The stones also had to be dressed, one of the many tasks new to Jim Richardson, but by the summer of 1973, the mill was ready to operate. With the sails raised on the four long blades, the blades, main shaft, and gear wheel could rotate up to twenty times a minute, generating up to fifty horsepower. Too old to climb the steep steps up into the mill, the ninety-six-year-old warrior stood silently watching those sail-covered blades whipping around. He was uncharacteristically silent; he must have been remembering the last time he had seen that mill turn, almost nine decades earlier. He would die less than a year later. 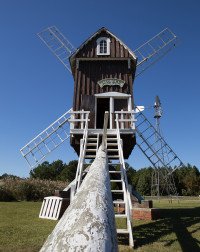 The mill was named the “George L” in honor of him, but then, windmills, unlike boats, always are given a male name. George never wanted a mill named after him, but he was outvoted by all others involved. The mill continues to operate two times a year. The sails are raised by halyards on each blade, one at a time, and the lower stone can be lowered slightly to the proper distance to get the coarseness needed for the meal to be produced. The basic framework of the mill is still intact, a testament to Jim Richardson’s craftsmanship, and the mill stands today as a monument to two remarkable gentlemen: a boatbuilder and the son of a boatbuilder. Through the efforts of so many, a ten-year-old boy’s remarkable dream came true.

I don’t remember it being built, but I remember it blowing down in the blizzard of 1888, when I was 11 years old. Since then, I’ve always hoped that someday the old windmill would come home again. Now that we have it, we’re going to keep it, and all the angels in heaven and demons down under the sea can’t take it away from us. (George L. Radcliffe, Aug. 22, 1972)

You can purchase “Call Me Cousin George” online on Amazon at this link and in person at the 50th anniversary event on April 23, 2022.