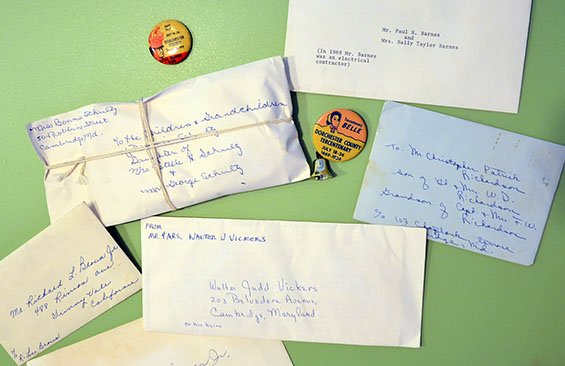 You may have a message or treasure from a long lost Dorchester County relative waiting for you! During the county’s 350th Anniversary Celebration in September, officials opened a 50-year-old time capsule filled with letters, small packages and mementos from 1969. Many were addressed to “heirs,” “descendants” or the “future generation.”

Over the past two months, dozens of people have stopped by the Dorchester Country Tourism office to claim items that were tucked into the time capsule by parents, grandparents and other relatives. But many more pieces still are unclaimed, said Julie Gilberto-Brady, manager of the Heart of Chesapeake Country Heritage Area.

“We are putting out a call to the community to help us connect these treasures with their proper owners,” Gilberto-Brady said. “We want people to know that they may have a message from a long-forgotten family member, and what better time to rekindle that connection and those memories than during the holiday season.”

The letters and packages include a wide variety of materials. There are financial documents, such as Dorchester County’s 1969 Budget and Tax Levy, and there are chatty and matter-of-fact messages from current office holders to those expected to be holding the same position in the future. There also are poignant messages written by parents and grandparents, knowing that their descendants will be reading the letters after they have died. Other letters have included mementos, such as photos and silver dollars, to be handed down to grandchildren or great grandchildren.

To their surprise, the 350th Anniversary Committee even found a packet that actually was meant for them. The thick envelope was addressed to “The Future Generation. With our love and blessings.” It contained about a dozen, hand written letters from the members of the Tercentenary Festival Committee – the group that planned the 300th anniversary 50 years ago.

“That was quite a find,” Gilberto-Brady said. “We loved reading about their planning and how proud they were of their far-reaching celebration – that one writer described as a “grand affair.” Their “can-do” spirit, enthusiasm and love for Dorchester County really came through in their messages. One person pointed out that 1969 also was the year that we landed on the moon, and I think that their inspiration for their ambitious event reflects that spirit.

“A common theme that we spotted immediately was the respect the committee members had for each other and, in particular, Tom Flowers, who was the general chairman of the event. He is mentioned by name numerous times in his colleagues’ letters.” 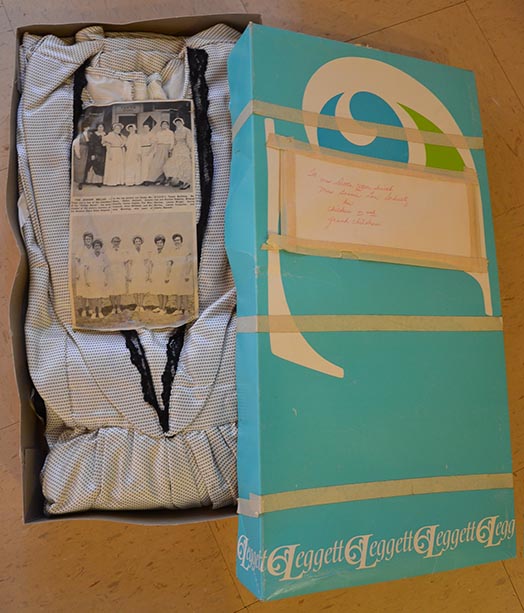 A dress worn by a member of the Tercentenary Belles was included in the time capsule.

One large box found in the capsule is from the former Leggett Department Store and contains a long, vintage 1800s-style dress. Two newspaper clippings are pinned to the dress, and one features several women in long dresses, including one wearing a dress like the one in the box. The caption explains that they are the “Dinner Belles,” the Belle chapter of the dietary workers at the Eastern Shore State Hospital.

Some letters reveal the writers’ sense of humor, like the one that says, “If we aren’t here – hang it in your ear.” That envelope is marked “Wheatley Brothers Speed Shop.” A little digging found that in the 1960s, two Cambridge race car drivers, Jay and Buck Wheatley, ran a speed shop on Maryland Avenue, and Jay won the National Hotrod Racing Association championship in 1967, according to Images of America, Cambridge, by A.M. Foley and Gloria Johnson-Mansfield.

The Heritage Area is actively working to find the people listed on the items. In the meantime, the unclaimed pieces are on display at the Dorchester Visitor Center. Anything that is not claimed by the end of the year will be opened in early January, catalogued and archived.

View the list of unclaimed items here. Visitors are welcome to stop by the Dorchester Visitor Center at Sailwinds Park to look at the two display cases containing the remaining pieces. The Visitor Center is open from 8:30 a.m.-5 p.m., seven days a week.

“We are asking the community to spread the word, to help us find the owners of all these letters and packages,” Gilberto-Brady said. “Share the list with your friends and family, post it on your social media feeds, hang it in your shop windows or office bulletin board. We want to see that these items do make it into the hands of their intended recipients.”